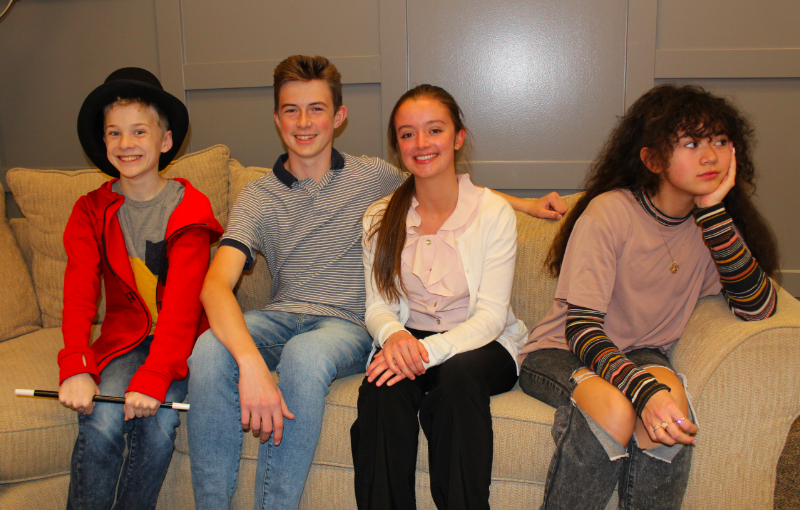 “This show has really resonated with the students. It’s a love story that’s not driven by romance and that’s unusual in musical theater,” said Cali Wilkes, director of the Willowcreek Middle School production of “Freaky Friday” opening on Thursday, April 22 at 7 p.m. in the school auditorium.

The plot of the musical version of “Freaky Friday” is like the movie. A mother and daughter switch spirits and live a day in each other’s lives. Before the magic can be reversed, Ellie Blake and her daughter, Katherine, discover secrets as well as a bond they’ve been missing since Katherine’s husband, Ellie’s father, died.

“I knew I had some powerful female vocalists, and we would be able to showcase that talent, but this is also demanding acting. It was a fun challenge for the leads,” said Wilkes. Riley Anderson plays Ellie Blake and Belle Mowry is Katherine Blake in the WMS production. “It gets confusing when you have a teenager acting like a grown-up in a teenager’s body, or a teenager in a grown-up’s body.”

Some of Wilkes’ students had never heard of the 2003 “Freaky Friday” Disney movie or any of the catchy music from the musical. “I know a lot of the students connected personally with the idea of a blended family and accepting a new parent. It’s nice to see that portrayed on stage,” noted Wilkes. The day Katherine and Ellie switch lives also happens to be on the day of Ellie’s wedding–to a man Katherine doesn’t particularly like.

For “Freaky Friday,” the WMS auditorium will be at 100% capacity and masks will be required for audience members. The cast and crew members, all theater students at the school, have worn masks throughout rehearsals and everyone has stayed healthy. “It’s harder to hear them when they’re wearing masks, but I’m hoping they’ll be nice and loud when they get to take them off for performances. It’s great to see them be so adaptive – they’re handling all of these changes very well,” added Wilkes.