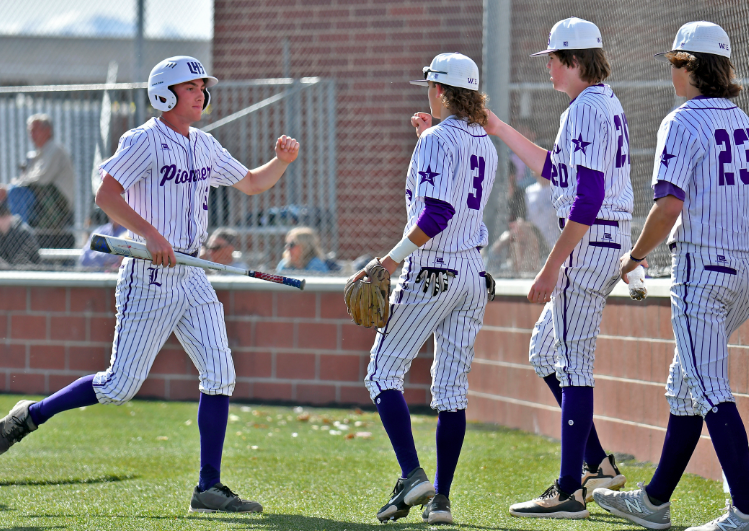 The Lehi baseball team swept the three-game series with Mountain View but lost all three games to Mountain Ridge the next week.

The Pioneers shut out Timpview twice in the next series, but the third game was rained out and moved to Monday. It was also a Lehi victory, but details were unavailable at press time.

The Pioneers scored a run or two in four innings to build this victory over the Bruins, who did not help themselves with multiple errors.

Senior pitcher Chase Carter went the distance and gave up just two hits. Senior Creyton Cooper had a double and a triple plus two RBI, and senior Zach Evans also had two RBI.

The Pioneers were ahead just 3-1 going into the bottom of the fourth, but they exploded for 11 runs that turn and gave up none in the top of the fifth to end the game early.

Senior Ethan Zimmerman pitched for the win. Cooper had a pair of triples and Evans had three RBI. Senior Teigen Peterson doubled.

The Bruins again hurt themselves with errors, giving up eight runs in the third and six in the fourth to make it an easy victory for the Pioneers. Peterson was credited with the win on the bump.

Zimmerman and junior Denton Lindford each had a double and three RBI in the game. Cooper hit two of the team’s seven doubles. Sophomores Jackson Brousseau and Boston Bingham along with Peterson provided two RBI apiece.

The Pioneers opened the game with a two-run first inning and held off the Sentinels for a while, but they only got two hits and gave up nine. Sophomore Jake Olsen doubled and Lindford drove in two runs.

The Pioneers had the lead after five innings but couldn’t hold it, giving up two runs in the top of the sixth and being unable to answer in their final two turns. Olsen had a double and two RBI. Zimmerman also doubled, and Lindford plated the other run.

The Sentinels matched two Pioneer runs to open the game and then scored in the next three innings to build the winning margin. Zimmerman had a home run and two RBI in the loss.

The Pioneers outhit the Reds and scored in more innings, but they gave up six runs in the top of the sixth inning and their comeback rally fell just short.

It was a different story against the Thunderbirds. The Pioneers pounded out 13 hits to end the game in five innings. Carter threw four innings and got the win, while junior Tate Harward finished up in relief.

Bingham had a double and four RBI, while Zimmerman doubled twice and contributed three RBI. Peterson and Olsen each drove in a run. Junior Braden Nielson hit a triple.

Zimmerman went the distance in the shutout, giving up just one hit. The Pioneers had 16 hits, plating six runs in the third and five in the fourth to once again end the game early.

Cooper led the offense with a triple and three RBI. Brousseau hit a home run and had two RBI, while Nielson also drove in two runs. Zimmerman, Olsen, Lindford and Carter all doubled in the contest.