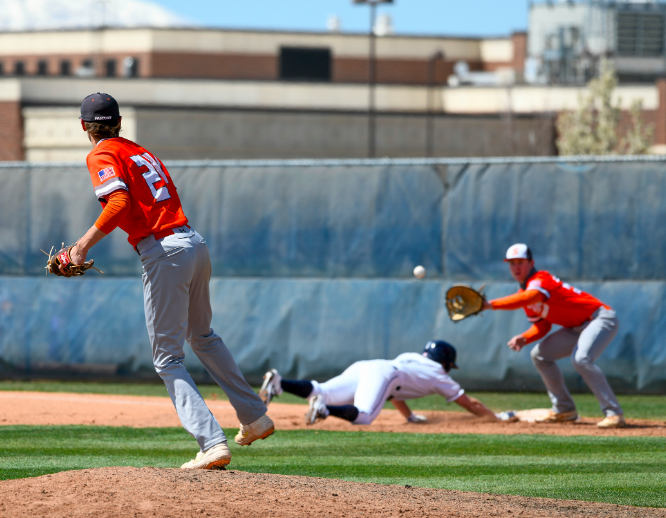 The Skyridge baseball team won twice and lost once in the opening Region 4 series against Corner Canyon. Two of the games were rained out during the week and were made up with a Saturday double-header.

The Falcons scored on a groundout by senior shortstop Garrett Bauer in the first inning and a single by junior second baseman Stockton Salcido in the second inning. Three runs in this turn gave the visitors the lead for good.

Skyridge plated three insurance runs in the seventh inning as senior third baseman McKade Sampson and sophomore left fielder Dalton Young both homered to drive in runs in the frame. Young led the Falcons with two hits in four at-bats.

Sophomore Crew Schenk pitched the Falcons to victory on the mound. He lasted five innings, allowing one hit and zero runs while striking out two and walking none. Junior Nick Holland started the game for Skyridge and surrendered three runs on five hits over two innings, striking out five and walking one.

The Falcons fell to the Chargers on the final play of the game. The score was tied at six with Corner Canyon batting in the bottom of the seventh when Zack Geertsen singled on the first pitch to send the winning run across the plate.

Skyridge fell behind by four runs in the second inning. The Falcons scored three runs on a single by Sampson in the third and a passed ball during senior catcher Matt Garside’s at-bat in the fifth.  A hit by Bauer and a sacrifice fly by Sampson in the seventh scored another run for the Falcons.

Skyridge collected eight hits. Senior Colby Carter started the game on the bump and went 3-for-3 at the plate with one walk and one run scored. Sophomore first baseman Tyler Ball had a pair of hits, including a double. Young had a triple.

The Falcons turned the tables on the Chargers in the second game of the make-up double-header, scoring six runs in the top of the seventh inning to put the game away.

With Corner Canyon leading 3-0 entering the top of the sixth, Garside drove in three runs with a double to even the tally.

In the seventh inning, Holland and senior second baseman JD Berry singled, followed by three walks and a double by Sampson to bring the runners home. Sampson went 2-for-4 with three RBI and two runs scored to lead the offense.

Sampson also earned the victory on the hill for the Falcons, allowing one hit and zero runs over two and two-thirds innings, striking out five. Senior Matt Earl started the game for Skyridge, allowing three runs on four hits and striking out five in four innings.