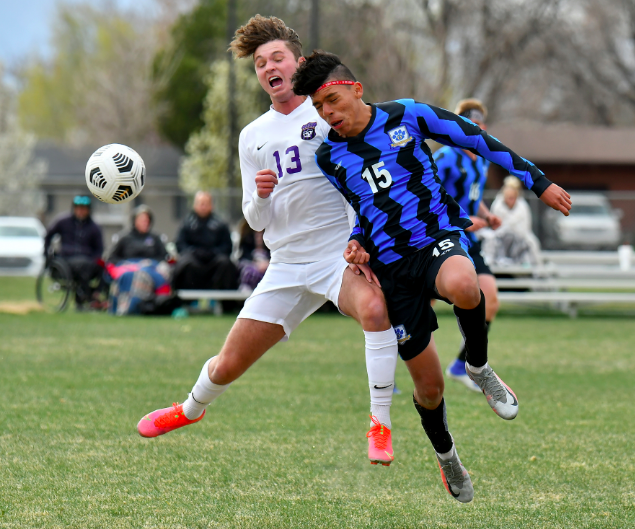 The Lehi boys soccer team is alone in first place in Region 7 after two more league victories, a shutout on the road at Orem and a thrilling golden-goal victory at home. “The boys played well this last week,” said Pioneer Coach Tim Graham.

The Pioneers dominated from the opening whistle against the Tigers and scored all three of their goals in the first period.

Junior forward Christian Jones found the target twice, and the third tally came from freshman Yo Aitken, who also assisted on both of the Jones goals. Sophomore defensive midfielder Cade Preston made the give for the Aitken score.

“Everyone got minutes during this game and it was good to see team success all the way up and down the depth chart,” Graham said.

“Friday’s game was a great one against Mountain Ridge,” the coach continued. “We were tied for first atop Region 7. We handed Mountain Ridge their only region loss earlier in the season and they were out for revenge.

“It was an epic battle,” Graham went on. “We ended up winning 1-0 in the second overtime with a golden goal by junior defender Braxton Sorenson on a great assist from senior Dexter Bambrough.

“This key win gives us a two-game lead in Region 7,” he said. The Pioneers have five league games left on the schedule. Their only loss in the region was by a shootout at Timpanogos. They play the Timberwolves at home on Friday.

“It’s exciting to see the boys believing in themselves and putting in the work,” Graham concluded.