“Something Rotten!” at LHS 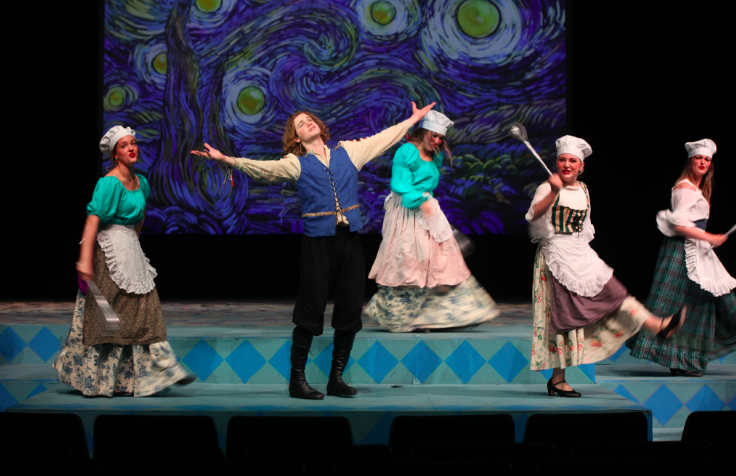 Lehi High School drama students are the first cast and crew in Utah to perform “Something Rotten!,” a popular Broadway musical featuring homages to Shakespeare and musical theater.  The show ran from Monday, April 19 to Friday, April 23 at the LHS auditorium.

“I saw ‘Something Rotten!’ on Broadway years ago and I was so delighted by it,” said director Mindy Nelson. “I have wanted to share it with my students and our community ever since.” In the LHS cast and crew of close to 100 students, only a handful had heard of the comedy/musical. Over the summer of 2020, though, they became obsessed with “Something Rotten!”

“There’s a lot of tongue-in-cheek references to Shakespeare and Broadway musicals. In one song they mention 20 musicals,” Nelson continued. “Something Rotten!” is the story of two brothers, Nick and Nigel Bottom, played by Aden Pernia and Brandon Saavedra respectively, playwrights and contemporaries of William Shakespeare, played by Tyler Garcia. Shakespeare is constantly stealing ideas and thunder from the Bottom brothers, so they go to a fortune teller to try to scoop their rival.

“It’s hilarious and the writing is so smart. Amid the laughs and fun references, you will find deeply complex characters and beautiful truths about being true to yourself and fighting for your family,” said Nelson.

After more than a year in quarantine, artist Randy Blackburn is back at the LHS theater with his hand painted, imaginative sets. “I am very excited to be back at the school with my friends,” said Blackburn. “This show is my favorite musical comedy. I wanted my first set in the new theatre to be memorable.”

Blackburn had the idea to create a bigger-than-life town with projections of his own paintings for the backdrop. “I was inspired by the colors and brushstrokes of Vincent van Gough. The further we get into the story, the more you can identify his influence,” Blackburn continued. “I am blessed to be able to return to the stage, this new theatre, and especially the kids.”

“We’re just thrilled to be able to do live theatre for an audience! We are so proud of our students. They’ve been willing to try new things and throw caution and insecurities to the wind. Comedy is hard. Putting together a complicated musical in half the time we usually have is seemingly impossible, but they did it. They can do anything,” Nelson concluded.