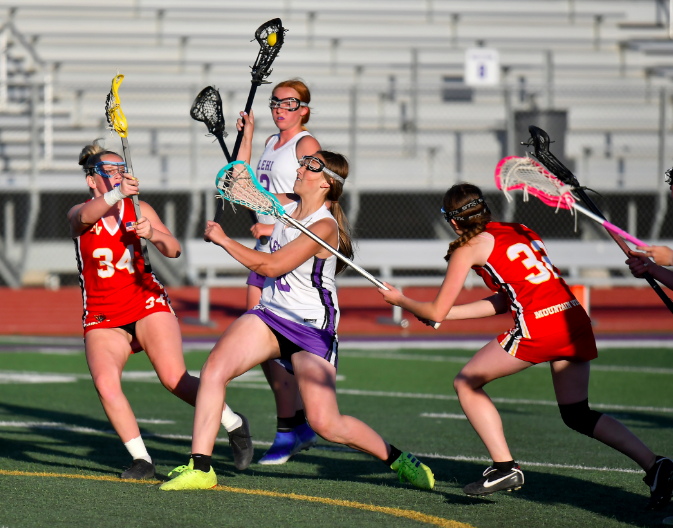 Seeded #4 and with a bye in the first round, the Lehi girls lacrosse team won two games in the Division C tournament before falling to top seed Woods Cross 12-1 in the semifinal game on May 25 at West Jordan High School.

In the second round on May 19, the Pioneers hosted #20 Mountain View and won 7-4. Sophomore midfielder Mylee McAllister led the way with three goals and sophomore midfielder Karli Fiedler added two goals and two assists. Junior goaltender Kathren Moreau had seven saves in the contest.

In the semifinal, the Pioneers just couldn’t muster much offense against the Wildcats. They got off plenty of shots, but Fiedler netted the only one that counted off a give from McAllister. Moreau made a valiant effort with 11 saves.

The team finished with a very respectable 8-10 record, especially considering there were not enough players to field a JV team this year.

Fiedler was the team’s leading offensive player, with 41 goals and nine assists on the season. She also collected an average of 2.5 ground balls per game and caused six turnovers.

McAllister was next with 25 goals and six assists and registered 54 draw controls. Willes scored 11 times and made five assists. She also led the team in ground balls fielded with 44 and caused turnovers with 11.

Junior attacker Lillie Ray converted on half of her shot attempts for 12 scores, but the most efficient shooter was sophomore defender Josie Taylor, who found the net on five of six attempts (83%). Moreau finished with 202 saves for the season.