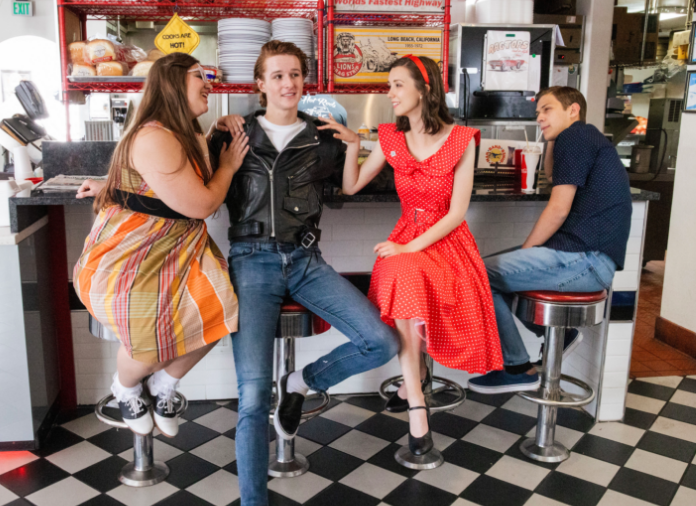 Opening night for Lehi Arts Council’s production of the musical comedy “Bye Bye Birdie” is tonight, Friday, July 23, at 7 p.m. at Willowcreek Middle School, 2275 W 300 N. The show will run from July 23 to August 7, Mondays and Thursdays – Saturdays. Tickets are available at the door or lehicityarts.org.

Director and choreographer Dani LeCompte has fond memories of playing a screaming teenager in “Bye Bye Birdie” when she was a 12-year-old. In Lehi’s production, LeCompte’s daughter Trevi, is wearing the same costume her mom wore. “It’s an inclusive show and really great for families. We literally have the town ensemble – it’s wonderful,” said LeCompte. The cast consists of children, teens and adults, including siblings and parents with children. LeCompte’s mother and sister are onstage, and her husband has been building sets, too.

“Bye Bye Birdie” takes place in 1958 and parodies a young Elvis Presley (“Conrad Birdie” in the musical), who gets drafted into the Army, devastating his teenage fans. Unsuccessful songwriter Albert Peterson hatches a plan to get Conrad to sing one of his songs on “The Ed Sullivan Show” and kiss a randomly chosen high school girl goodbye as Conrad leaves for the Army. Conrad Birdie’s final performance in a small Ohio town creates an uproar, perfect for musical comedy and ensemble dance numbers.

“The jokes and references translate fairly well, but there are some things that only grandma and grandpa might get,” chuckled LeCompte. “The 1950s are still so nostalgic with the jukeboxes, the poodle skirts and the cars. They really wrote Conrad so close to Elvis that people will definitely recognize him.”

“Our cast is phenomenal! They’ve done so well with the material and bring so much heart into this story,” LeCompte continued. This is her first time directing a Lehi Arts production, but Dani LeCompte has been around the Utah County performing arts scene for many years, working often with Jerry and Kurt Elison. She also spent time as a character at Disneyland, only hinting that she was friends with the villains and nothing more.

“It’s really a family, group effort and a labor of love. I’m grateful we could include a larger cast for this production,” said LeCompte. They’ve been rehearsing at the small Arts Center along with the summer theater camps for kids and the Lehi Chorale. The “Bye Bye Birdie” cast also rehearsed in the parking lot for the big ensemble numbers. “It was a little toasty,” LeCompte said with a smile. “We make it work – it’s community theater.”

Everyone from directors to stage crew to actors on the stage are willing, though, to endure whatever they must to put on the show, especially after being shut down for many months during the pandemic. “People need to get out and connect and share a story. This is a group effort and people are so happy to get to do it. I don’t think we valued it as much as maybe we should have,” concluded LeCompte. “I feel like all our efforts really mean something.”