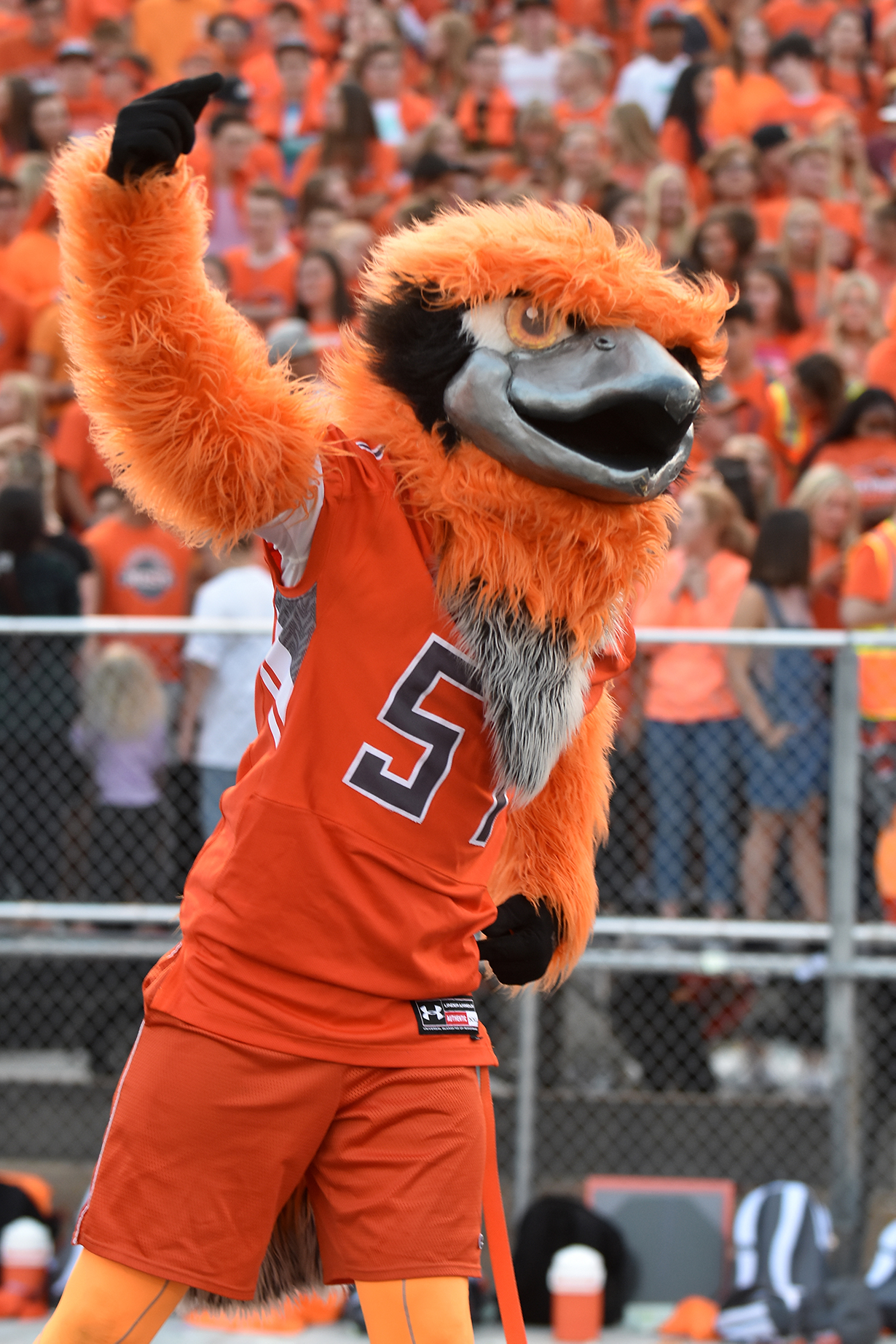 The Skyridge Falcons overcame adversities in a barn burner that went into overtime Friday night against the Timpview Thunderbirds. In an evenly matched battle, Skyridge triumphed over Timpview’s physical attack on the field. Quarterback McCae Hillstead recorded a two-yard rushing touchdown in the top half of overtime as the Falcon defense dominated the Thunderbirds and got a stop for the win.

Hillstead went 16 for 30 with 215 yards passing, one touchdown and one interception. His statistics were skewed due to several dropped passes by the inexperienced Falcon receivers. Hillsteadremained calm on the field despite steady pressure by Timpview’s pass rush. The 30-minute lightning delay didn’t diminish the Falcon energy. Wide receiver Connor McAllister scored first with a 19-yard pass from Hillstead. The Falcons led 7-0 at half-time. Jeter Fenton followed up with a 7-yard touchdown in the fourth quarter to tie the game at 14.

The Falcon offense struggled to protect Hillstead, who made several critical plays outside the pocket with his feet. Fenton carried the ball 27 times for 95 hard-fought yards, mostly coming after contact.

Skyridge Head Coach Jon Lehman said, “This was a game of adversity. It started with a lightning delay. We were out for 40 minutes after the first two drives of the game. To have to come back onto the field after that is a major challenge. The team responded to that with a lot of fight against a good Timpview team that is physical and well-coached, and they made me proud.”

The Falcon defense made the difference, holding Timpview’s talented offense at bay. Safety Saxon Higbee recorded 11 tackles on the night, with one key interception to stymie the Thunderbirds. Tausili Akana had eight tackles from his defensive end spot. Dalton Young, Elijah Terripaia and TaytonHiatt all recorded five tackles, and Terripaia had a sack. Reserve defensive back Andrew Buckland recorded his first interception of the season.

“In the game, it was grimy, and we were fighting for yards, with struggles within. I was glad about how well we fought and finished this game,” added Lehman.

“The difference tonight was heart. Our team has a lot of heart. We just came out and played for each other tonight,” said Higbee.

“For the game plan, we thought they were going to come out in the spread. In the first quarter, they tried to run it on us. It was our job as safeties to lock down one of the Thunderbirds’ best players, and we held him to just little catches, which made a difference in the game tonight,” said Young.

The Skyridge Falcons will play their first region game on the road on Friday, September 17, against the Westlake Thunder.