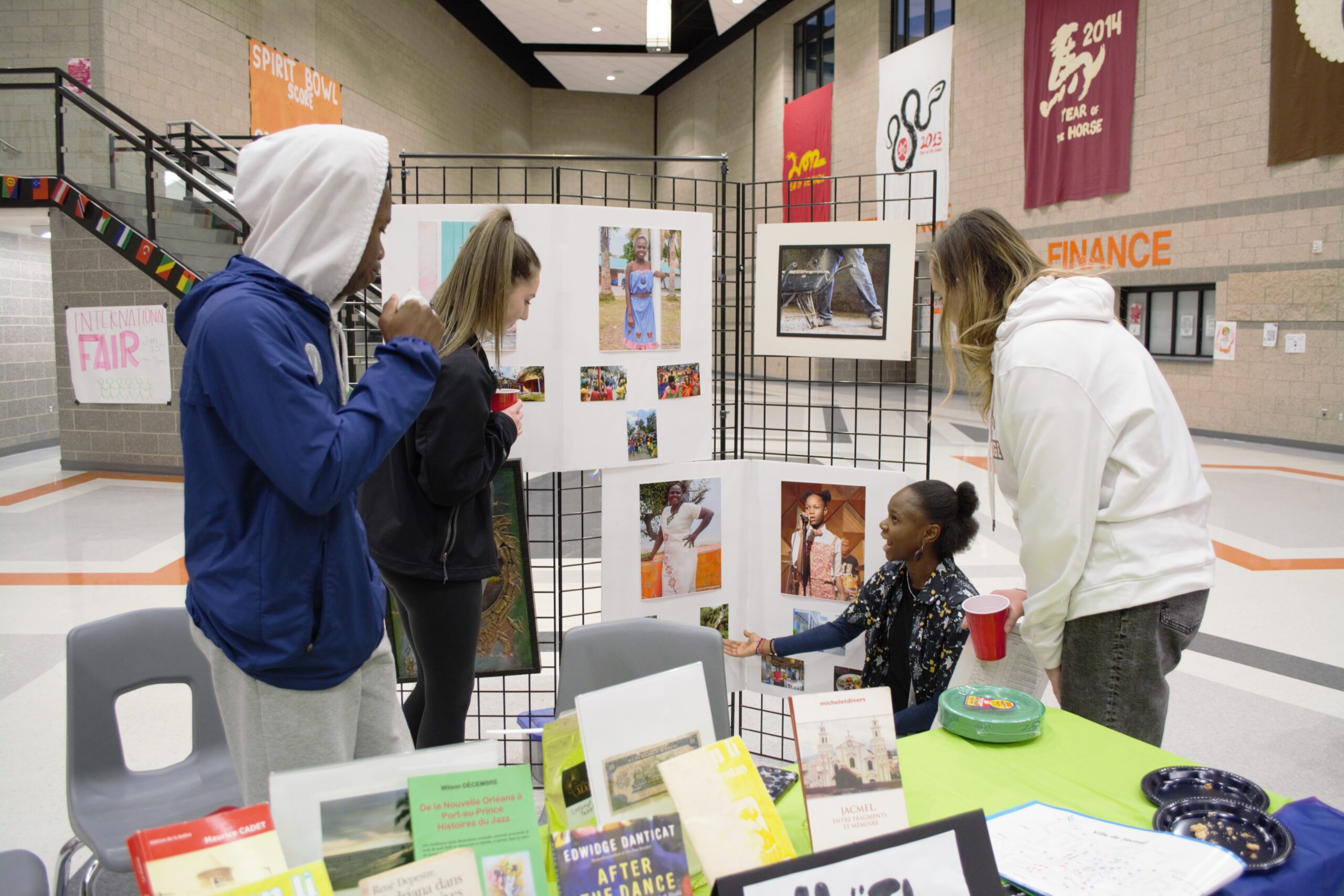 Skryidge High School students from all over the world shared their stories and their culture at the first International Fair on Tuesday, Jan. 26 at the school.

“Part of my campaign for Student Council was focusing on inclusivity and diversity,” explained Tala Alnasser. Tala is from Jordan and Palestine. She is currently serving on the SHS Student Council as Student Recognition Officer. She is also the World Languages Sterling Scholar for SHS.

“I haven’t done this since fourth grade and it might be weird, but I really wanted to do it again. I know a lot of people who wanted to represent their countries,” said Tala. She and the Social Studies classes organized the International Fair for the school.

“I really wanted to push the elementary and middle school kids to get excited about learning a new language and other cultures. That was a huge reason I wanted to do this. I’d really like an Arabic program here at Skyridge,” Tala continued. Her mother, Rula Alahmmad, brought their favorite foods and wore traditional “thob ‘ub” to the fair.

Although Tala and her family moved to Lehi in 2019, this is her first full year at Skyridge. “I would technically call this my first year at Skyridge. The pandemic made my sophomore and junior years short. I’ve really enjoyed being on Student Council and getting to go to events after feeling so isolated those first two years.”

Acier Goodwin, a sophomore at Skyridge, was adopted from Haiti in 2015 when he was eight years old. “I had some challenges growing up – I had to learn a new language and the culture was very different from what I knew, but I love new experiences and living here,” said Acier.

Acier doesn’t remember a lot about his home country, but he does remember the weekly carnivals during January and February. “You can see the parades from above through the windows in the buildings. It’s very colorful and beautiful.”

“My biggest dream is to go back to Haiti and help. I want to do as much as I can,” said Acier. He speaks French and is still learning English.

Colin Gill, a teacher at Skyridge, brought his wife, twin boys and his parents to the International Fair. Gill’s parents lived in the United Arab Emirates while his father, Brian, worked there.

“The culture is so different,” said Brian Gill. “They have a call to prayer twice a day every day. It really increases spirituality no matter what you believe. They have high levels of integrity there.”

“Westerners have a misconception about how women are treated over there. I’m sure it’s different in Saudi Arabia, but in the UA women are revered and respected. Men don’t shake hands; they greet women by bowing with their hand over their hearts. They don’t touch women. They’re never in a woman’s space. It’s not a suppressive thing, either, women really run that country,” Gill continued.

The Saturday following the International Fair, Skyridge held their annual Chinese New Year Celebration at the school. They rang in the Year of the Tiger with a show that included aerial silks, lion and dragon dances and face-changing masks. There were dozens of activities for all ages and games with a Chinese twist.

After learning about cultures around the world, students and attendees could sign the Inclusivity Pledge on the wall at Skyridge High School. “I pledge to lead a life of love and compassion – always looking out for those around me and advocating for the inclusion of all people. I pledge to spread inclusion by eliminating discrimination through celebrating differences and promoting awareness about the talents of people with all abilities.”