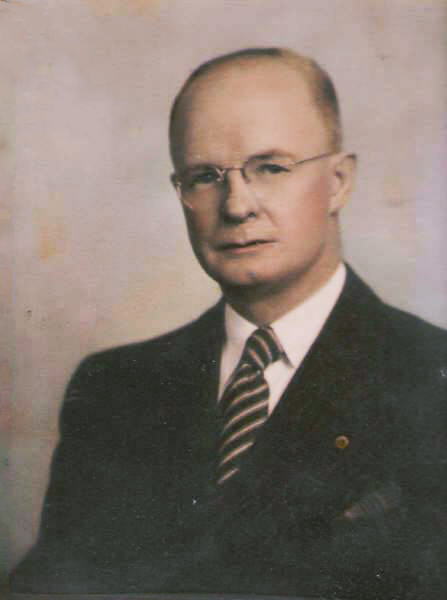 For anyone who has lived in Lehi more than fifty years, Dr. Elmo Eddington’s name is spoken of in tones of love, gratitude, and admiration. He served as Lehi’s doctor for more than 40 years.

Dr. Eddington was practicing medicine in Chicago when he got a phone call from his brother. While driving along State Street, Eddington’s brother hit a small child riding a bicycle. He rushed the slightly injured boy to the hospital only to find that Dr. Fred Worlton had recently died. Lehi had no doctor.

Within a month, Dr. Eddington relocated to Lehi, bought the hospital from Worlton’s widow and established his living quarters and office in the facility. The year was 1931. His practice started slowly. During prohibition, instruments could not be sterilized using alcohol. Alcohol use could only be approved by the city council. Many citizens didn’t like to visit a doctor in their office because they were used to home visits, so Dr. Eddington started making home visits. In one day during a blizzard, he made eight house calls for which he was paid $8.00.

There are hundreds of stories that are told and retold about Dr. Eddington’s selfless service. One such story is told by Glenda Cook Carson. Glenda was born in the Lehi Hospital. She was so small she wasn’t even weighed. They put her in an incubator and there she stayed until she weighed 5 pounds. Dr. Eddington begged, “Can I have her?” Living in Cedar Fort, the Cooks, Glen and Donna, would have a hard time getting to Lehi if an emergency with Glenda occurred. She was so small and fragile and Dr. Eddington was afraid she might perish if she became ill. The Cooks appreciated the offer but decided to take their chances taking her home to Cedar Fort.

During the fifties, polio was a scourge in our nation. In 1953, thirty -five cases of polio had been diagnosed in Lehi. Dr. Eddington was determined to do everything he could to prevent this debilitating disease. He suggested that church be suspended for a time so citizens would not be exposed. Children were told not to wade in irrigation ditches or go near standing water. It was about that time that Dr. Jonas Salk discovered the Salk Vaccine. Dr. Eddington managed to qualify Lehi students for a clinical trial. In 1954, all students at Lehi Elementary were lined up and given a sugar cube with pink vaccine on it. Some received the real vaccine and some a placebo. Within several years the disease was essentially eradicated.

Lowell Brown, a close friend of Dr. Eddington, was diagnosed with cancer. After exploratory surgery, it was determined that more extensive surgery would be needed. Dr. Eddington assisted the operation be performed at St. Marks Hospital in Salt Lake City. When Eddington stitched Brown back up, nurses marveled at the precision and perfection of his stitches. Brown went on to live to the ripe old age of 91.

In 1951, Betty Fowler was watering her lawn early one spring morning as Dr. Eddington, her neighbor, walked to his office. They chatted briefly. For a moment, Fowler felt uneasy as Dr. Eddington looked at her with his clinical eye. “Betty, I want to see you in my office in twenty minutes.” After a blood test, the kindly doctor ordered Betty to take some iron tablets because she was severely anemic.

Unlike today, when we see specialists for almost everything, Dr. Eddington diagnosed all ailments and was almost always right. He had an uncanny sensitivity to both physical and emotional problems. He was “on call” 24/7.  He, along with his black bag, were a familiar sight anytime, night or day, making house calls or simply calling on friends and neighbors to check on them.

He was also responsible for the renovation of the Lehi City Hospital. He owned the hospital outright, but deeded it to Lehi City so the city could apply for a grant to upgrade the facility.

He lived an exemplary life of service and compassion for Lehi families.