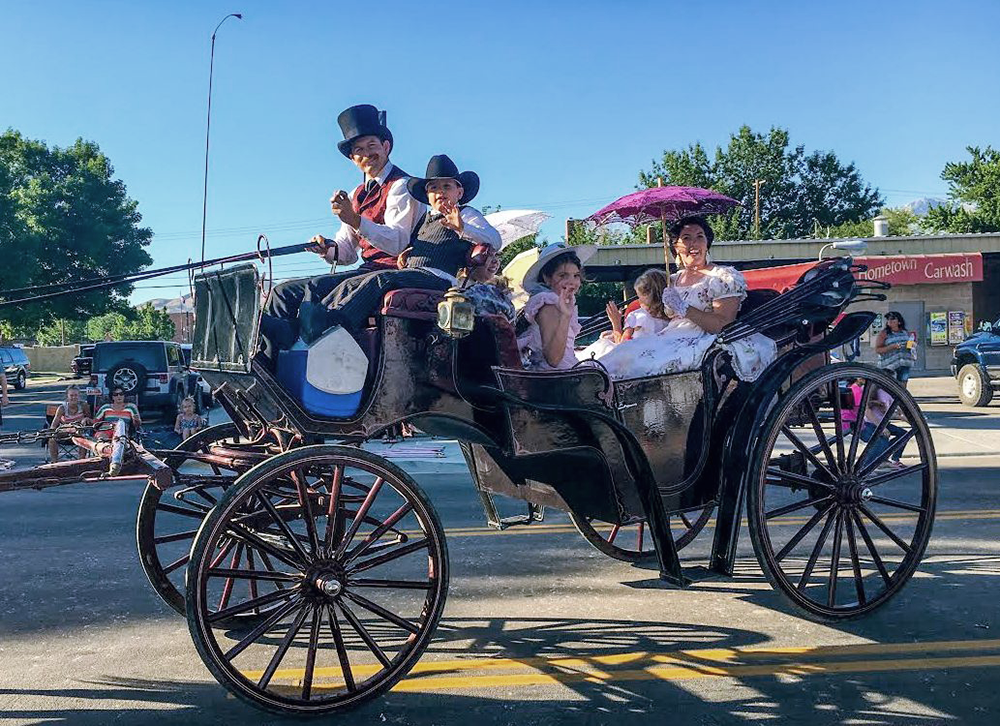 A member of the Cutler family has been in the Lehi Round-Up Stock Parade for almost 40 years. Lehi’s stock parade is the biggest in the state, even bigger than the Days of ’47 parade in Salt Lake City. Mark and Alicia Cutler have continued the family tradition in style. Over the years, they’ve won trophies for Best Costume, Best Western Man, and Best Horse-Drawn.

Ned Cutler rides up Main Street with his son, Paul, in the Round-Up Stock Parade in 1984.

Mark Cutler always has ideas floating around in his head for costumes to wear in the yearly stock parade. Last year Alicia and the Cutler girls dressed in Southern Belle costumes, complete with hoop skirts, hats, and parasols while Mark drove the carriage in a top hat and coattails. Alicia borrowed those costumes from Hale Center Theater. The Cutler’s were a very popular entry and even won a trophy for Best Horse-Drawn last year. Alicia Cutler loves Halloween and costumes. When it comes to the kids’ stock parade costumes, she takes care of anything that needs to be sewn or painted and Mark does all the leather and metal work. The year that Mark and Alicia’s son Ryan dressed up in a safari outfit, Alicia spent three hours hand-painting a giraffe pattern on Ryan’s horse.

“We had our daughter Sami dressed as Ana from ‘Frozen’ and her horse was decked out to look exactly like Ana’s horse, but Ryan riding a giraffe/horse that year got a lot more attention,” said Alicia.

In past stock parades, Alicia has made Bermuda shorts with suspenders for a horse with blonde hair, a grass skirt and coconut bra for a pony, and wings for a Pegasus. Mark Cutler’s big dream is to do a Ben-Hur-style chariot pulled by four horses abreast. Alicia winces at this idea because she can see so much potential for disaster.

To get ready for the stock parade, Mark Cutler gives his horses what he calls the “mountain treatment.” For several days in a row before the parade, he takes the horses up American Fork Canyon to get them “tired in their bones.” The parade route is non-stop commotion with excited people making noise, candy being thrown and children darting into the road to retrieve it, and people throwing poppers on the sidewalks. All the riders in the stock parade want to make sure their animals are as tired as possible to keep them calm. The whole Cutler family ride their horses from their home to the parade route instead of driving them over in trailers.

For 2017, the Cutlers plan to wear Western get-ups, each of the older three children riding a horse and the youngest, Charlotte, riding with her Mom. Mark’s goal is to get a trophy for each of the kids, so their entry is bound to be special.