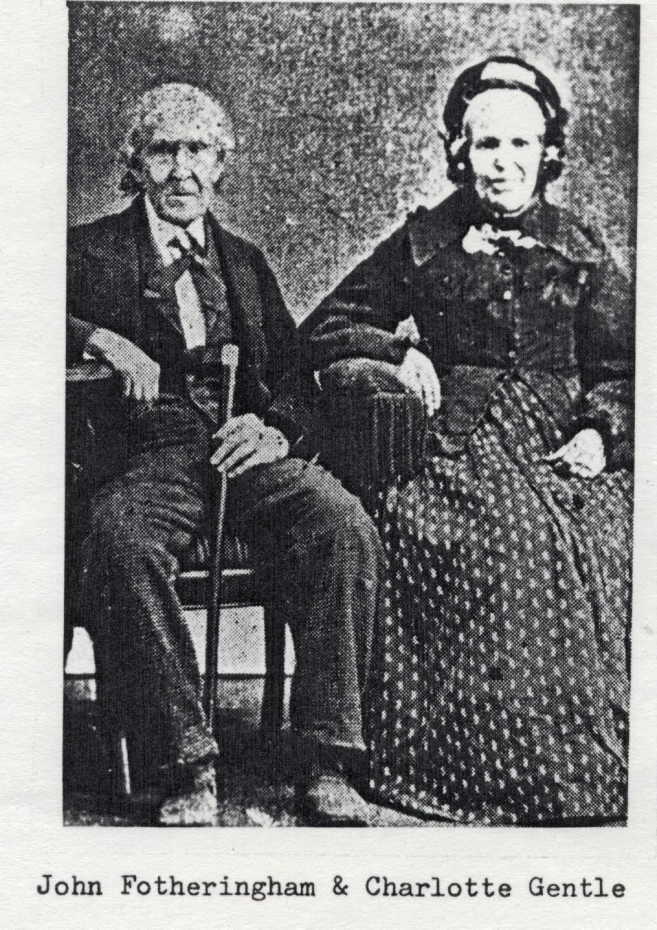 Charlotte Gentle Fotheringham was born in Blackford, Perth, Scotland in 1789. She married John Fotheringham in 1819 and they started their family in Scotland. John was a tailor and Charlotte kept a few cows – together they saved enough money to buy their own home. Their family life started out so gently it is impossible that they could imagine Charlotte having a confrontation with Native American Indians in a tiny settlement in Utah when she was in her mid-60s.

John and Charlotte Fotheringham joined the Church of Jesus Christ of Latter-day Saints in Scotland in 1847 after their son William took them to a meeting where LDS missionaries were preaching. The family naturally wanted to join with other members of the Church in America and the Fotheringhams had the means to bring their whole family over at the same time.

The Fotheringhams spent the next two years off, traveling by ship from England to New Orleans, Louisiana, to Saint Louis, Missouri. In the Spring of 1849 John and Charlotte Fotheringham decided to go to Council Bluffs, Iowa, to join the LDS Church members there. They took a new passenger steamer called the Dacotah. The steamer was loaded with immigrants bound for the West with their mules and wagons on board. The Dacotah ran into a snag, making a big hole in the bottom of the ship. She gradually sank with the stern in 18 feet of water and the bow in shallow water. Following the sinking of the steamer was a scene of great confusion – animals in the water, luggage floating away, and passengers trying to get to shore. Charlotte Fotheringham carried a belt full of English gold around her body, which she was able to keep safe while she was in the water. John was lucky enough to fish out his tools, too.

In 1850 John and Charlotte Fotheringham made their way to the Salt Lake Valley. Charlotte, now a grandmother at 61, traveled in the wagon with one of her new grandbabies, Charlotte Nash. The company was in for a long, tedious journey, even experiencing a stampede that killed one of the men.

Soon after arriving in Salt Lake, the Fotheringhams decided to go to Dry Creek (now Lehi) and join the six families who were already there. They secured 40 acres of farm land and 20 acres of meadow. When their first crop of wheat was about six inches high, the first trouble with the Native American Indians occurred. The men of the settlement were away and the Indians took advantage, letting their ponies loose on the growing fields. In the book, History of Lehi, it says:

“About this time, three Indians came up the creek one day where the Karren, Fotheringham, Royle and Petersen families were all living. The Indians appeared to be in an ugly mood and, emboldened by the fact that all the men were away at work, they took great delight in frightening the women and children. Finally Charlotte Fotheringham, an old Scotch lady, seized a hatchet and, shaking it threateningly in the face of one of the braves, she berated him right and soundly in her good old mother tongue. This so surprised and amused the Indians that they withdrew after entering a rebuttal in the Ute language.”

Charlotte Gentle Fotheringham found out what she was made of when she became a member of the LDS Church and a pioneer in Lehi, Utah. She worked and earned her place here, fearlessly defending her crops, family, and neighbors.