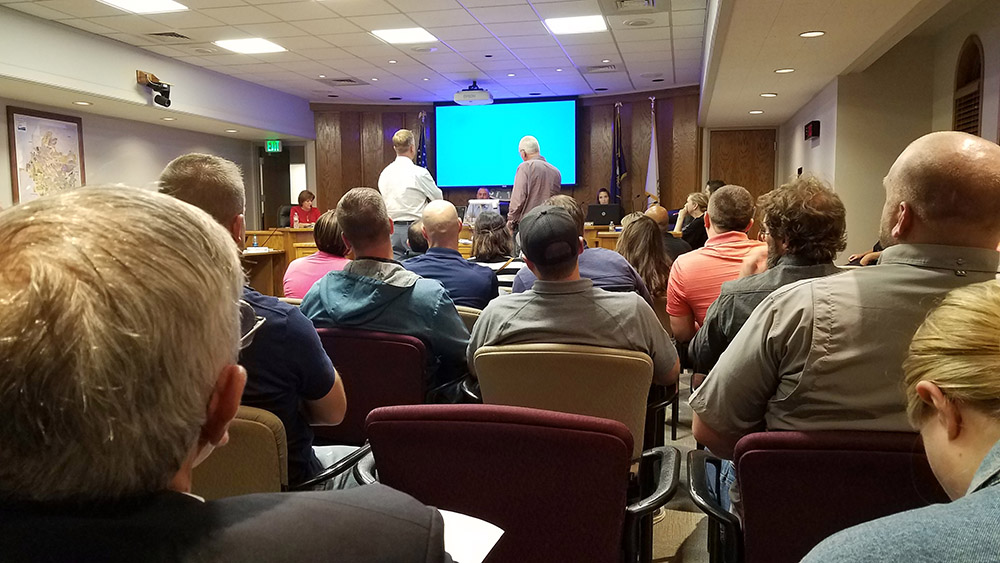 After much discussion and presentations by various individuals for or against the development, the commission voted to send a positive recommendation with findings to the City Council with four “yays” and two “nays.”  Both women on the Planning Commission, Hutchings and Seegmiller, voted against approval.

The original plan had been approved with conditions in a city council meeting held June 27th, 2017.

The conditions outlined by the planning commission in June were as follows:

On July 11, 2017, the City Council in pre-council discussed the approved concept plan with amendment to the area plan. Several residents were at the pre-council meeting to provide input. Additional conditions were suggested by City Council and planning staff.

After the project was withdrawn from the Planning Commission agenda twice, the amended concept plan was again presented to the group. On Thursday October 26,  Rob Clausen, representative for TMTH presented the amended plan. Along with Clausen, a representative from Kleinfelder Engineering group (an engineering firm specializing in dust mitigation and other environmental issues) and Geneva Rock were present to answer questions.

TMTH is requesting an exception to Lehi City’s development code regarding grading. Presently, the code will only allow balanced grading. This is a process where material is taken from one place to another. TMTH is asking that material be exported to Geneva Rock. Currently, Lehi City does not allow exporting of material by conveyor belt.

Commissioner Heather Seegmiller had questions regarding the export of material. “Has the applicant satisfied the requirements imposed by the conditions of plan approval?” Head Lehi City planner, Kim Struthers answered, “More details have to be presented. It is tough to say if the plan meets all requirements.”

Seegmiller said, “Does it meet the safety requirements of the citizens? We need more details on how they are going to mitigate the dust. I believe it is subjective as to whether this will mitigate the dust issues.”

Clausen said, “We want to come up with a better solution for the city. The area plan has been approved twice in 2008 and 2012. Because of the hill in the middle of the development we have to export the material. We will create a berm with trees. There is an automatic sprinkling system that will help with dust mitigation. We have reduced the density of homes from 50 to 25. We will also work with other developers to complete the road to the top of the development. We will grade a school site and park and donate land for a church and a biking trailhead. On the 64- acre piece of land, 3.8 million cubic tons of material will be exported. We expect the grading to be a 2 to 3- year project.”

A similar project was done in Brigham City and the study of the Brigham City development showed no harmful health effects to the residents according to Clausen.

Clausen introduced a representative from Kleinfelder Engineering to verify the dust mitigation procedure. Clausen stated, “We have worked with Geneva Rock in full disclosure. The state has passed new requirements. The grading is state controlled by a state certified controller. Someone who is trained to assess the level of safety must be involved in the dust mitigation procedure, however, there is some subjectivity in the evaluation. The state is OK with the plan.”

Seegmiller asked Clausen further questions and said, “What about the wind? I am left with more concerns. At what point does the controller issue a warning? I can’t believe there is not a point identified when the wind becomes an issue in dust control. The state can’t shut down operation when the wind speed is above 25 MPH. There are no stipulations for when the operations are shut down because of wind.”

The level of opacity was discussed. Commissioner Hutchings asked when opacity would be measured. Opacity is the level of dust in the air created by wind.

During the public input session, the city council chambers were full of Traverse Mountain residents wishing to express their opinion. It was also noted that 75 emails had been sent to the commissioners expressing opinions about the plan.

Aaron Samudio, a representative of Utah Physicians for a Healthy Environment, spoke to the health hazards associated with the grading. In reference to the Brigham City Study, he cited many flaws:

Another resident Duane Barruss said, “I live by the conveyor belt. I walk around these hills. I observe new plumes of dust all the time. Opacity is useless. The berm and trees will not mitigate the dust. Fugitive dust movers everywhere. Hills above the berm will make the berm useless.”

Tim Provost and Cindy Hancock both expressed support for the new plan. Cindy Hancock said, “Health issue is off the table. Dirt will be controlled. Putting high density back up in the canyon is worse than the dust. Traffic caused by density will be harmful. One school is not enough in Traverse Mountain and Alpine School District cannot afford the land up there.”

Lehi residents attend a public hearing of TMTH’s request for an amendment to the Traverse Mountain Area Plan on October 26, 2017. | Photo by Matt Paepke

Rob Ludlow said, “I am in support of the development. We have learned a lot from past developments. This is a master planned community. There are some gaps in development requirements, no school sites, no church sites. We can do this in a safe way. Physicians for a Healthy Environment is a Nancy Pelosi, left-wing liberal group who are opposed to everything.”

Dr. Erica Faraclas said, “I am a member of the HOA board. I am into community health. This would be the worst of the two options. …I am not afraid of high density.”

After two hours of testimony, commissioners were left with the difficult task of deciding whether to approve or approve with conditions, or deny the amendment to the area plan.

Commissioner Peterson asked, “What can you do if the grading goes beyond 3 years?”

Commissioner Hutchings said, “The DRC has not had a chance to look at new plan.”

Commissioner Ellis said, “Trucking is worse than a conveyor belt.”

Nielsen made the motion to send a positive recommendation with findings to the City Council. After enumerating an extensive list of findings, the voting took place with two “nays” and four “yays.” Seegmiller defended her “nay” vote in a powerful message to the crowded room by saying, “wanting a school and park are wonderful, but the first consideration is people’s health.”

Mayoral debate highlights difference in viewpoint between Wilson and Johnson