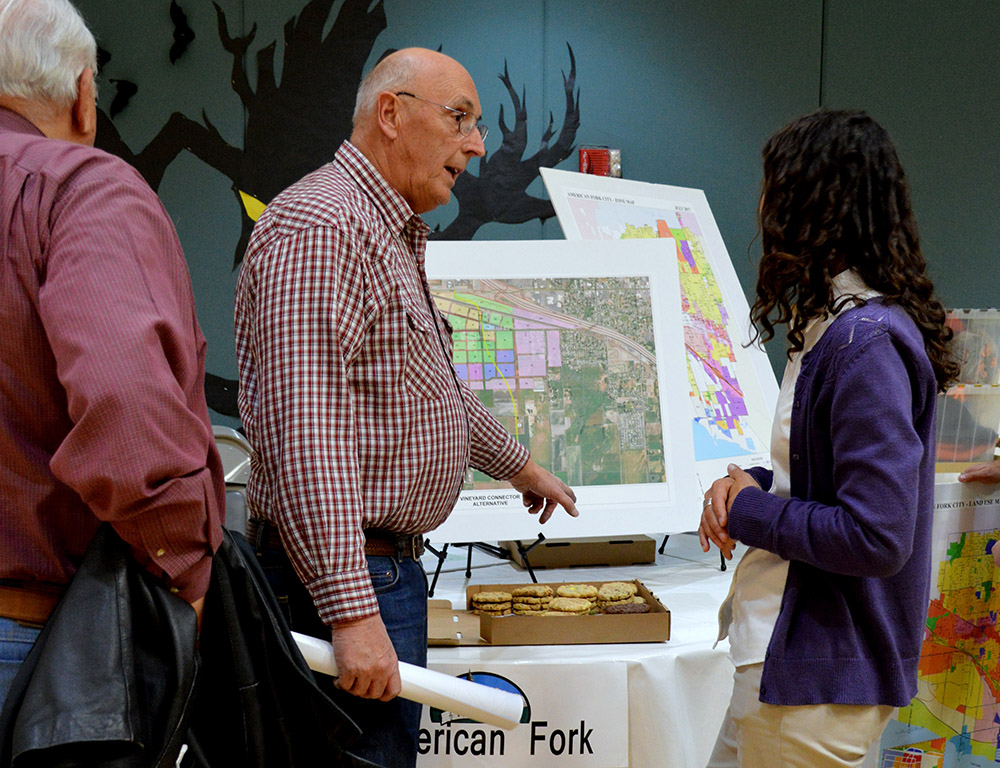 The Mountainland Association of Governments (MAG) held an open house on Wednesday, October 25, where cities in Utah County could display maps of upcoming transportation projects and have city employees discuss those projects with the public. A crowd gathered around the American Fork City table to see the new proposed route for the Vineyard Connector, a 5-lane road leading north from Geneva Road, similar in size to Bangerter Highway.

In late August, American Fork City Mayor J.H. Hadfield and the City Council voted to terminate Agricultural Protection on a 200-foot wide swath of land near the Lehi-American Fork border at 1200 West 200 South, so that the Utah Department of Transportation (UDOT) can do environmental impact studies. American Fork City already has an environmentally cleared option for the Vineyard Connector, but some members of the city council and Mayor Hadfield are proposing a new route. American Fork City Planner Wendelin Knobloch was on hand at the open house, but he doesn’t agree with the new proposed alignment. Knobloch pointed out a possible Vineyard Connector route that is closer to Utah Lake and would benefit residents in Saratoga Springs, Eagle Mountain, and Lehi better.

One of the purposes for the Mountainland Association of Governments, one of four  Metropolitan Planning Organizations (MPO) in Utah, is to allow all transportation related decision makers a voice in the process to plan and fund regional transportation projects. Every mayor and county commissioner in Utah County as well as Utah County representatives for UDOT and UTA attend a meeting at the historic courthouse on Center Street in Provo once a month (first Thursdays at 5:30 PM) to discuss and coordinate transportation projects in Utah County. Lehi City’s Mayor Bert Wilson attends these meetings faithfully. MAG also has a tech advisory committee, similar to a city planning commission, made up of engineers and planners. That tech advisory committee includes Lehi city engineers and planners. The public is welcome to attend any of these meetings.

Residents of Lehi’s Spring Creek Ranch neighborhood, as well as American Fork farmers who will be directly impacted by the new proposed route for the Vineyard Connector, once again voiced their disapproval of American Fork City’s changes at the MAG Open House. One Spring Creek Ranch resident said she expected to see development near her home, but thought that the Agricultural Protection on the farms in her backyard would mean the land would be sold to a housing developer or maybe a school or business, but not a major 5-lane road. American Fork farmer, Jess Green has voiced his strong objection to the new route every chance he gets. Green’s 40+ acre farm is surrounded by Agricultural Protection, but his land is not protected. Green sold some of his acres to a developer to build apartments 11 years ago, which was consistent with the zoning in that area. Construction has been stalled pending approval from American Fork City, though. Jess Green alleges that the city wants his land for their own projects.

Every four years MAG updates their long-range transportation plan. The next update will be in June 2019. American Fork City could have the proposal for the new route of the Vineyard Connector in that plan. In order for it to be a real option, though, UDOT would have to do an environmental impact statement. Part of that process includes public hearings and meetings where interested parties can voice their opinions and concerns. Shawn Seager, Director of Planning at MAG, said, “Any time the public is involved it’s a good thing. We want to reflect what the cities want to do in all of our planning and projects.” The main goal of MAG is to come up with projects that benefit every city in Utah County. Seager encourages residents to stay involved – their voices will be heard.