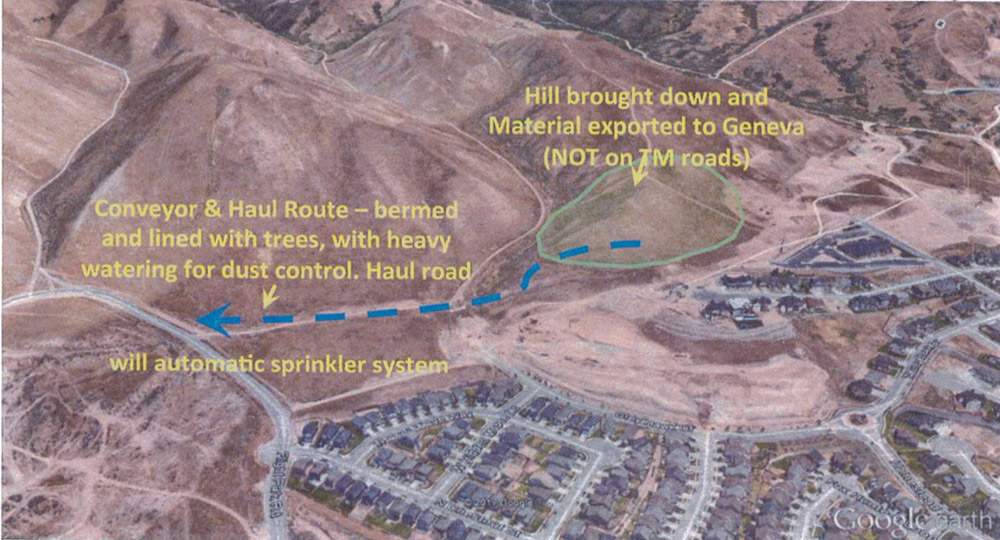 For more than half a century a handful of dry farmers coaxed winter wheat from the dry, sandy hillsides above SR 92 in Lehi. Back then the area was called the “low hills” by locals. Eventually the farmers sold their land and developers found cheap land with tremendous development potential.

In Lehi City Council meeting January 16, 2018, residents of Traverse Mountain, the now thriving residential and commercial development, convened in a showdown of sorts to present their case for the denial or approval of an amendment to the Traverse Mountain area plan. Traverse Mountain is a Planned Community (PC) with its own Home Owners Association (HOA). The HOA has their own set of rules governing the community.

In April of 2017, Traverse Mountain Temporary Holding, LLC (TMTH) presented to Lehi City Planning Commission a plan for a high- density housing development in the far northern edge of Traverse Mountain in and around Central Canyon. The plan was rejected by the Commission. The plan was revised and approved. The revised plan brought high density down from Central Canyon to be located near the Central Bank area, in return, grading in the 63- acre plan would be done for a school, church, and park. The material would be transported to Geneva Rock by conveyor belt. Residents have expressed a great deal of concern about this type of material transport as the typically windy area would cause serious health issues because of the amount of grading necessary and the prospect of environmentally dangerous materials released into the air.

Several emotion-filled meetings with Lehi City Planning Commission have resulted in a revised area plan and measures put in place to mitigate the problems with dust and air quality. Over the last several months, the Planning Commission heard arguments for and against the plans and eventually approved the area plan with conditions. The plan was tabled by the City Council in December pending some fine tuning of the development agreement between the HOA and the developer. The final step was for approval from the Lehi City Council members in their January 16th meeting.

Newly elected Mayor Mark Johnson allowed public comment on three items: the motion to un-table the amendment to the Traverse Mountain Area Plan, the approval or denial of the Development Agreement between TMTH and Lehi City, and the approval and adopting the Traverse Mountain Area Plan Amendment. The two- hour long discussion was civil but emotional.

Carl Karren, general manager of Traverse Mountain Master Association and Board member, spoke first and said, “There have been inaccurate facts and misleading representations by TMTH. I am a dirt guy. I have been her since 2002. The amount of dirt to be moved is inaccurate. Bonding has not been required for roads and parks and the final outcome is not known. We can’t see how this can be financially viable. Where is the financial backing? There must be a mechanism in place to assure things get done. I don’t see they have the bandwidth to finish.”

Dr. Elias Faraclas spoke to the constitutionality of allowing the project that violates the HOA’s  CC&R’s (covenants, conditions, and restrictions), which indicates that mining is not allowed. Faraclas said, “We will have a mining operation within .5 miles of homes and a school. There is no guarantee that Alpine School District will build a school. It is not in Lehi City’s prevue to say where a school is to be built. The HOA is not in favor of this development. The benefits do not raise to the level of justifying more grading. TMTH’s proposal violates the master declaration. Litigation is a sure thing.”

Faraclas continued, “This area plan is not consistent with the general plan. Open conveyor belts are not allowed in Lehi City. It is a prohibited use. We will endure grading 12 hours a day, 6 days a week, for 3 ½ years.”

Angie Parkin, also opposed to the plan, constructed a cardboard box showing the size of 1 square unit of material. “There will be 2.5 million containers this size transported out of our area,” Parking said. She presented a chart showing comparisons of the cut and fill plan with the export and selling material plane. She emphasized the fact that the project also violates the HOA’s CC and R’s.

Rob Ludlow, a resident of Traverse Mountain, spoke in favor of the proposal. According to Ludlow, “We live in a master-planned community. Sites have been identified for schools and churches, but they get changed. Developers charge Malibu prices and the land is priced out of reach by Alpine School District. We have given developers unbounded rights which is not right. We regret it. There are no 8- acre parcels left in Traverse Mountain. We are victims of planning by exception. There are 2,500 more home sites in the plan and no place for a school.”

Adam Hill, resident of Traverse Mountain spoke in opposition to the proposal. “We have a plan and then somebody comes and changes the plan. I have been in front of the Commission since April. This developer hasn’t made timelines. We have given them the ‘keys to the kingdom.’ There are so many problems with this development agreement.”

Rob Clausen, representative for TMTH, reminded the Council of the many times the plan has been re-drawn to meet the requests of the Planning Commission and the City Council.

Mayor Johnson gave each council member a chance to express their views. Council member Condie said, “When I first saw the plan I thought it was a slam dunk. Dirt is going to be moved. I do not want to approve anything that isn’t ready. I don’t know the unintended consequences. We are putting the cart before the horse.”

Council member Hancock said, “There has not been a master developer looking after the Traverse Mountain community. TMTH has given everything and there has been no movement with the HOA.” Hancock is a resident of Traverse Mountain.

Council member Revill said, “The more discord between parties, the harder it is to swallow. We adopt something and then something changes, and it always comes back to the city to resolve.”

City attorney, Ryan Wood, expressed concern that Lehi City becomes the enforcement agent of the conditions of the agreement. If the amendment is not approved, the developer has one year to re-submit a proposal.

Mayor Johnson said, “I was involved in the 2012 area plan. I saw a lot of compromise. Grading had to take place. This issue won’t go away. Conveyor belts are a good way to move dirt. Better give and take, better communication is needed. The weight of this issue has been on the shoulders of the City Council. It should be with the HOA.”

Condie moved to deny the development agreement. The motion failed 3-2. Hancock made a motion to approve. The motion passed 3-2. The hotly debated TMTH development will proceed.