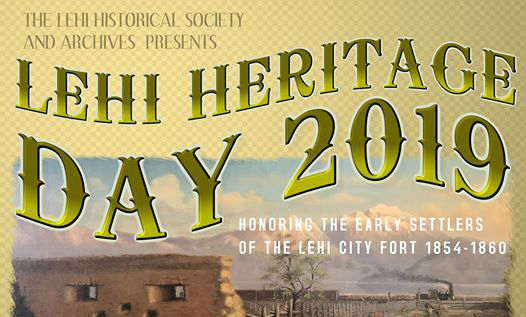 Annual Event to be held on Monday, September 2

The following are the first of eight stories that will run throughout the month to feature the couples who will be highlighted at Lehi Heritage Day on Labor Day, Sept. 2, at the Legacy Center at 123 N. Center in Lehi from 2:30-7 p.m.

Eight couples were nominated by friends and family for the tremendous effect they’ve had on our community through a lifetime of service. Members of The Lehi Historical Society and Archives voted to obtain this year’s winners. Lehi Heritage Day is organized and presented by the society and Lehi City.

Heritage Day festivities begin at 2:30 p.m., when honorees will be celebrated in a Showcase Parade from 400 East up Main Street to Center Street and ending in front of the Legacy Center.

At 3 p.m., the couples will be featured in an Honoree Celebration in front of the Legacy Center. Each couple will receive their own brick in the Walk of Fame Garden.

Check-in for the free Classic Car Show in the east parking lot of the Legacy Center begins at 3:30 p.m.

This year’s theme is “Honoring the Early Settlers of the Lehi City Fort, 1850-1860.” For more information, please contact The Lehi Historical Society and Archives at 801-768-1570 or lehihistory.com.

Born and raised in Lehi, both attended Lehi schools and graduated from Lehi High School in 1970. Johnny served as LHS Student Body President while Amy was a cheerleader. They were assigned to dance together in the Junior Prom floorshow and have been sweethearts ever since.

In 1971, Amy was chosen as an attendant to Miss Lehi, Nancy Cook, and attendant, Jayleen Smuin. Johnny and Amy attended Weber State University for a brief time before Johnny joined the National Guard during Vietnam. Though never deployed, he served eight years in the American Fork unit.

After the couple married in 1972, Johnny became a lineman with Lehi City under the tutorship of Glen Carter. He attended the Mesa College Hot Line School in Grand Junction, Colo., and was later hired by Utah Power and Light (now Rocky Mountain Power). In 2012, after 32 years, Johnny retired from the American Fork Service Center as the operations manager.

Over the years, Johnny served tirelessly in scouting, receiving the prestigious Silver Beaver Award and attending the Philmont BSA Training in New Mexico. Many young men were influenced for good as Johnny served as their scoutmaster and Timberline Course director.

A former president of the LHS Booster Club, Johnny was inducted into the LHS Booster Club Hall of Fame. Blessed with a rich tenor singing voice, Johnny has sung with Amy as his accompanist, at many local funerals and programs. For 20 years, he was also a certified high school basketball official, calling games several times a week during the basketball season as well as for the city’s recreation program.

A convert to The Church of Jesus Christ of Latter-day Saints, Johnny has served in many capacities, including bishop and counselor in three stake presidencies. The couple spent 11 years with the Young Single Adults in the BYU 5th Stake and the last four as the program coordinators for the Church’s Addiction Recovery Program in the Utah County North Mission.

Johnny spent 17 years on the Lehi City Council serving with mayors Gary Sampson, Ron Smith, Howard Johnson, and Ken Greenwood. He was instrumental in the construction of the Lehi Legacy Center and spearheaded the formation of the Lehi Community Council and Family Week.

Amy spent much of her time supporting Johnny and “holding down the fort” at home. She served on the Miss Lehi Committee and in the local PTA. She managed the LHS Booster Shack concessions for three years, served on the Hutchings Museum Board of Directors, was a docent for the museum for 10 years and has served in many capacities in the Church including president of all three auxiliaries. Amy worked as an icing decorator at Peppermint Place, a candy factory in Alpine. She likes to read, cook, bake and organize.

Johnny and Amy have been married for almost 48 years and are the parents of four children: Kellie, Stayton, Luke, and Nick. They also have a Navajo foster daughter, Lisa, who lived in their home for more than 20 years. Lisa is currently a Master Sergeant in the US Marine Corp. They have 11 grandchildren. The couple likes to spend time at their Fairview recreation property at Skyline Mountain Resort, where Johnny serves on the Safety Committee. They were recently featured in the USU Extension Service Hidden Garden Tour. Their roots, as well as those of their ancestors, run deep in Lehi soil, and though it is hard to see things change, Lehi will always be home.

Few people are as involved in their community as Kirk and Bonnie Ryan Evans. As local business owners, church leaders, lovers of Round-Up, supporters of Miss Lehi and more, their influence can be felt far and wide in Lehi.

They owned and operated multiple businesses, including Evans Masonry, Evans General Contracting, K&S Auto, K&S Auto Sales, K&S Towing, and Bonnie’s Hair Salon. Each of these businesses contributed to the development of Lehi.

The couple worked together to provide countless hours of community service through civic and church programs. Kirk donated his time and talents to the design and development of the “Welcome to Lehi” parks and signs on the north and west ends of town as well as with the snack shacks at the Lehi Round-Up Rodeo Grounds and at Lehi High School.

Kirk was a volunteer baseball, basketball and wrestling coach for Lehi City sports for more than 13 years. He was also twice named the “Best Dressed Cowboy” in the Lehi Round-Up Stock Parade, once with his son, Ryan, and 20 years later with his grandson, Keetch.

Bonnie served on the Miss Lehi Committee for nearly 20 years as well as on the Miss Utah Board of Directors from 2001- 2014. When she marked 30 years of service, she honored with the Miss America Service Award. Bonnie was involved in PTA from elementary school to high school and was the PTA president multiple times. Together, Kirk and Bonnie were involved with and served as the chairs for the Old Folks Party for 40 years.

As members of The Church of Jesus Christ of Latter-day Saints, Kirk and Bonnie have served in numerous capacities. Kirk served in the Lehi 13th Ward bishopric, Lehi Stake High Council, Lehi South Stake presidency and as stake president of the Saratoga Springs Stake and Jordan River Stake. Bonnie has also served as a ward and stake Young Women’s president.

To many, Kirk and Bonnie are known for their wonderful and devoted friendship. They spend countless hours decorating headstones of friends and loved ones for every holiday and season. The couple makes every holiday memorable for those around them. Friends tease that their address list for Christmas cards is the Lehi phonebook. On Halloween, children come to the Evans home to get their picture taken and leave with the previous year’s photo. Their love for Lehi and those who live there is felt by all who know them.

The story of Kirk Evans and Bonnie Ryan began when they noticed each other while sitting just a few rows apart at the Lehi Round-Up Rodeo. Last year, they celebrated the 50th anniversary of that meeting with their children and grandchildren in the exact same location at the rodeo grounds.

Born and raised in Lehi, Kirk graduated from Lehi High School in 1971. Bonnie, originally from Heber City, was raised at Camp Williams and graduated from Bingham High School in 1970. The couple married on Jan. 26, 1973, when Kirk was 19 and Bonnie was 20. Later, they built their home on the family property, which was the site of the first Lehi settlement and was known as Evansville.

They are the proud parents of Jamie Evans Mecham, Ryan Evans, and Mckell Evans Drury and the proud Nana and Papa to 12 grandchildren and one great-grandchild.

Family is central to Kirk and Bonnie’s influence in the history of Lehi. Kirk is a direct descendant of Bishop David Evans, founder of Lehi, the Mayor, and the first LDS bishop. Kirk was the model for the Bishop David Evans statue which stands outside of the Legacy Center at 123 N. Center.  Kirk and Bonnie love Lehi and are proud to be one of the few Evans families left in “Evansville.”