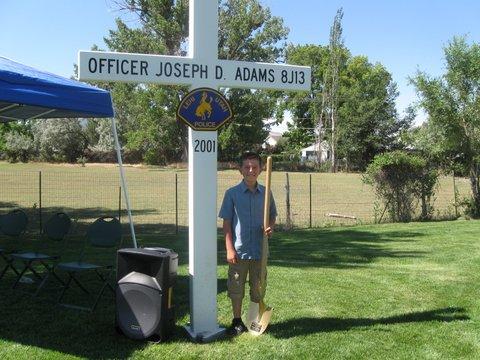 On Friday night, August 3, 2001, Officer Joseph D. Adams watched as two men in their 20s got into a Chevy Cavalier at the La Casa Supper Club (now Sabaidee Thai) on State Street in Lehi. The men had been in the restaurant for hours and some Lehi police officers, including Adams, were on a special shift assigned to find intoxicated drivers. Officer Adams followed the Cavalier as it weaved over lines on the road, making its haphazard way to the freeway entrance at 1200 West to go north. When Adams pulled the vehicle over on the corner at 2100 North and 1200 West, he ticketed the driver, Arturo Javier Scott Welch, and instructed Welch to get out of the car.

What happened next changed the lives of Officer Adams’ new family, including his wife Cydney and their baby, Cade, as well as his parents, Thad and Rosemary Adams, and his siblings, but it also changed Lehi. When Adams got Welch out of the car, he patted Welch down on either side of his body and proceeded to put handcuffs on him, beginning with the left wrist. With one handcuffed wrist, Welch reached into the front of his jeans with his right hand and pulled out a small handgun, pointed it over his left shoulder and shot Adams twice. One bullet went into Adams’ chest just a fraction of an inch above his protective vest. In the seconds before Adams lost consciousness, he fired back at Welch, hitting him twice in the abdomen and stomach. The man in the passenger seat of the Cavalier, a cousin of Welch’s, dove out of the vehicle when he heard the shots and Welch managed to get back into his car and take off without his cousin, getting on I-15 going north. Welch’s cousin called 9-1-1 from his cell phone, waited and cooperated with police when they arrived.

Medical emergency crews worked on Joseph Adams, but the small bullet had ricocheted through his body, just nicking his heart, and he couldn’t survive the wound. Adams was life-flighted to LDS Hospital and pronounced dead just after midnight on Saturday, August 4, 2001. Welch was found in an Albertson’s parking lot in Salt Lake and taken to LDS Hospital. Eight months later, Arturo Javier Scott Welch pled guilty to aggravated murder and was sentenced to life without the possibility of parole.

Officer Joseph Adams’ death stunned the small Lehi Police Department and the entire city. He is the only Lehi police officer ever killed in the line of duty. Officer Kenny Rose, a good friend of Adams, continues to keep Joe’s memory alive, checking in with Cydney and Cade and spearheading Eagle projects at the memorial park on State Street just south of 2100 North. One of those Eagle projects was completed by Joseph Adams’ son, Cade. A nine-foot tall, six-foot wide white cross, the traditional symbol for police officers killed in the line of duty, memorializing Officer Adams was originally placed in that same small park, but Utah members of American Atheists Inc. successfully argued that the placement of crosses on public land violates the principle of separation of church and state in a 2005, lawsuit and the memorial had to be moved. Lehi Block quickly offered to place the cross on their property, adding a decorative rock base. Now that Lehi Block has been sold, Officer Joseph Adams’ memorial cross is in a storage unit until it can find a home on private property in Lehi.

“Where it was on Powell’s property was within 100 yards of where Joe was killed and that was nice, but at this point we’d really like to put it in a prominent and permanent place somewhere in Lehi,” said Rosemary Adams, Joseph Adams’ mother. The memorial requires a ten-by-ten-foot spot of ground and minimal maintenance.

“I think the memorial helps emphasize the sacrifice that first responders make,” said Thad Adams, Joseph’s father. “I know how the officers in Lehi feel about it, how we feel about it, and how members of the Lehi community feel when they drive past Joe’s memorial. It’s important to a lot of people.”