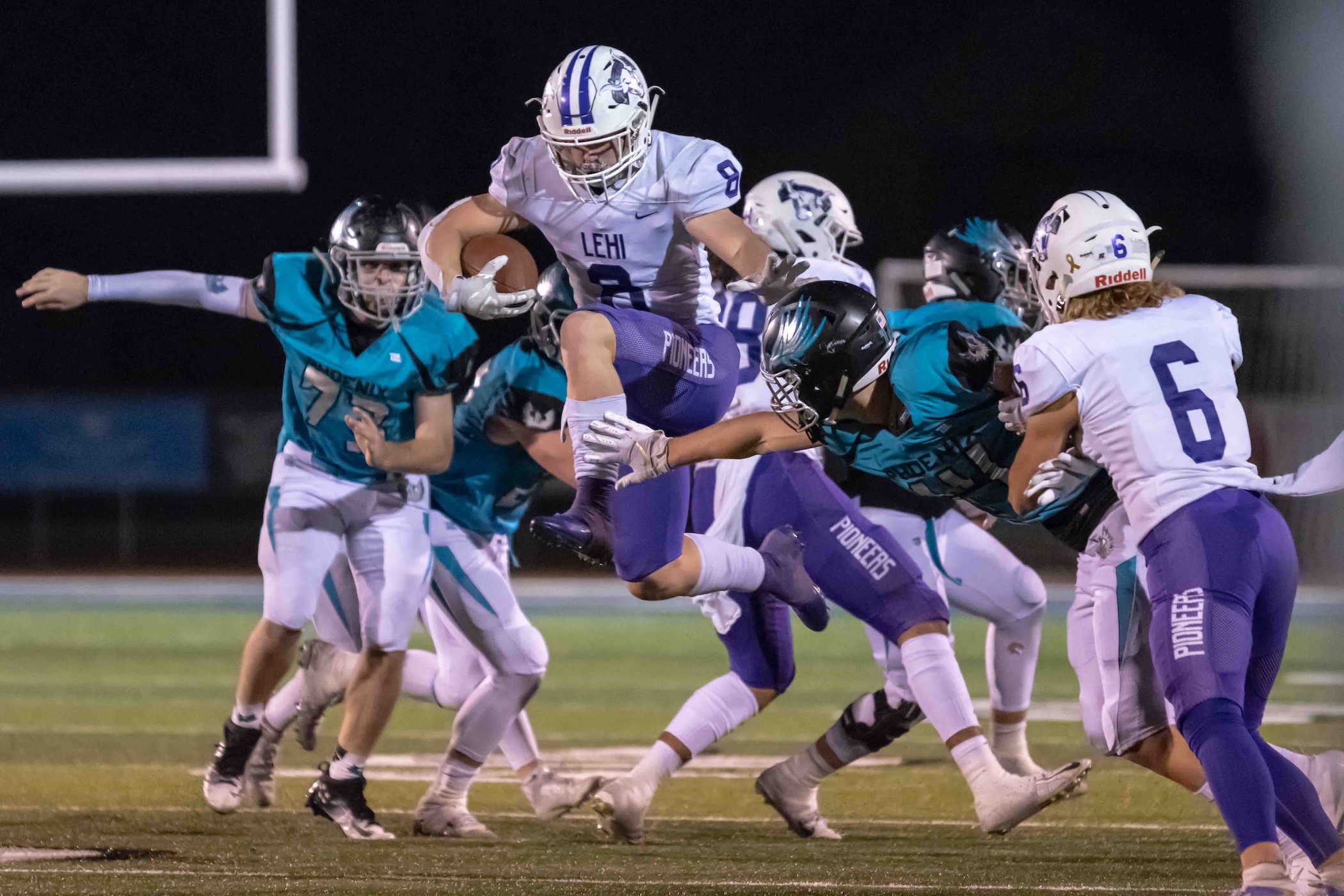 The Lehi Pioneer football team has earned a spot in the State Semifinals after defeating the Farmington Phoenix, 27-21, on the road last Friday, November 8. The Pioneers will play at Rice-Eccles Stadium Thursday, November 14 at 2:30 p.m. The last time Lehi played on this field, they defeated Skyridge for the 2017 5A State Championship.

The Pioneer offense struggled early in the game and was down 14-0 late in the second quarter. Their first four Pioneer possessions ended with two punts, an interception and a pick-six. Like The Beatles, the Lehi offense needed a little help from their friends (the Pioneer defense) to win the game. More on this to come.

Without giving everything away, let’s just say that unlike Greek mythology, the Pioneers were the team to gain new life (after a slow start), not the Phoenix. On their next possession, the Lehi offense settled in to score an 80-yard, 7-minute drive capped off by a 4-yard Carsen Manookin rushing touchdown. Pioneer defensive back Jaxson Southard tied the game up on Farmington’s next play from scrimmage when he intercepted a Phoenix quarterback pass for a 13-yard pick-6. The game was tied, 14-14, for the remainder of the first half.

The Lehi defense continued their outstanding play in the second half, forcing Farmington to punt on their first possession. However, the Phoenix intercepted another Pioneer pass and had the ball on the Lehi 43-yard line. Not to worry, Lehi’s Conner Crutchfield sacked the Farmington quarterback after he was flushed out of the pocket. On the next play, Harrington Ray put a big hit on the quarterback causing him to fumble and Jacob Vasquez nimbly picked up the ball and sprinted for a 49-yard scoop and score. Lehi 21, Farmington 14.

The Lehi team and fans were concerned when running back Carsen Manookin went down with an injury with about eight minutes left in the third quarter. Chandler Jenkins stepped in capably with a couple of long runs. Kicker TJ Roskelly completed the drive by hitting a 19-yard field goal. Manookin returned to the game for the next drive. TJ Roskelly added a 22-yard field goal early in the fourth quarter increasing Lehi’s lead to 27-14.

Just when it appeared that Lehi had the game in hand, Farmington made things interesting by scoring a touchdown with about nine minutes remaining in the fourth quarter. With the score Lehi 27, Farmington 21, the game got even more interesting when Lehi turned the ball over on their next possession with another interception. Again, not to worry. The Lehi defense stepped in and took care of business – sacking the Farmington quarterback and forcing a Phoenix punt.

Although the Lehi defense scored more touchdowns than the offense, football is the ultimate team game. The Pioneer offense sustained an impressive final drive and ran out the clock to end the game. Throughout the night the offense made enough plays, mostly on the ground, to win the game. Carsen Manookin, the senior running back, team captain, and veteran of the 2017 State Championship team juked, stiff-armed, ran over and, at times, flew over Phoenix defenders. He gained 162 yards on 28 carries and scored the only touchdown for the offense.

Lehi will meet the Timpview Thunderbirds in the Semifinals of the State Playoffs. The game is scheduled for a 2:30 p.m. start Thursday, November 14th at Rice-Eccles Stadium on the campus of the University of Utah. Timpview is a familiar foe from Region 7. The Pioneers will be looking to avenge a loss to the Thunderbirds earlier in the season.