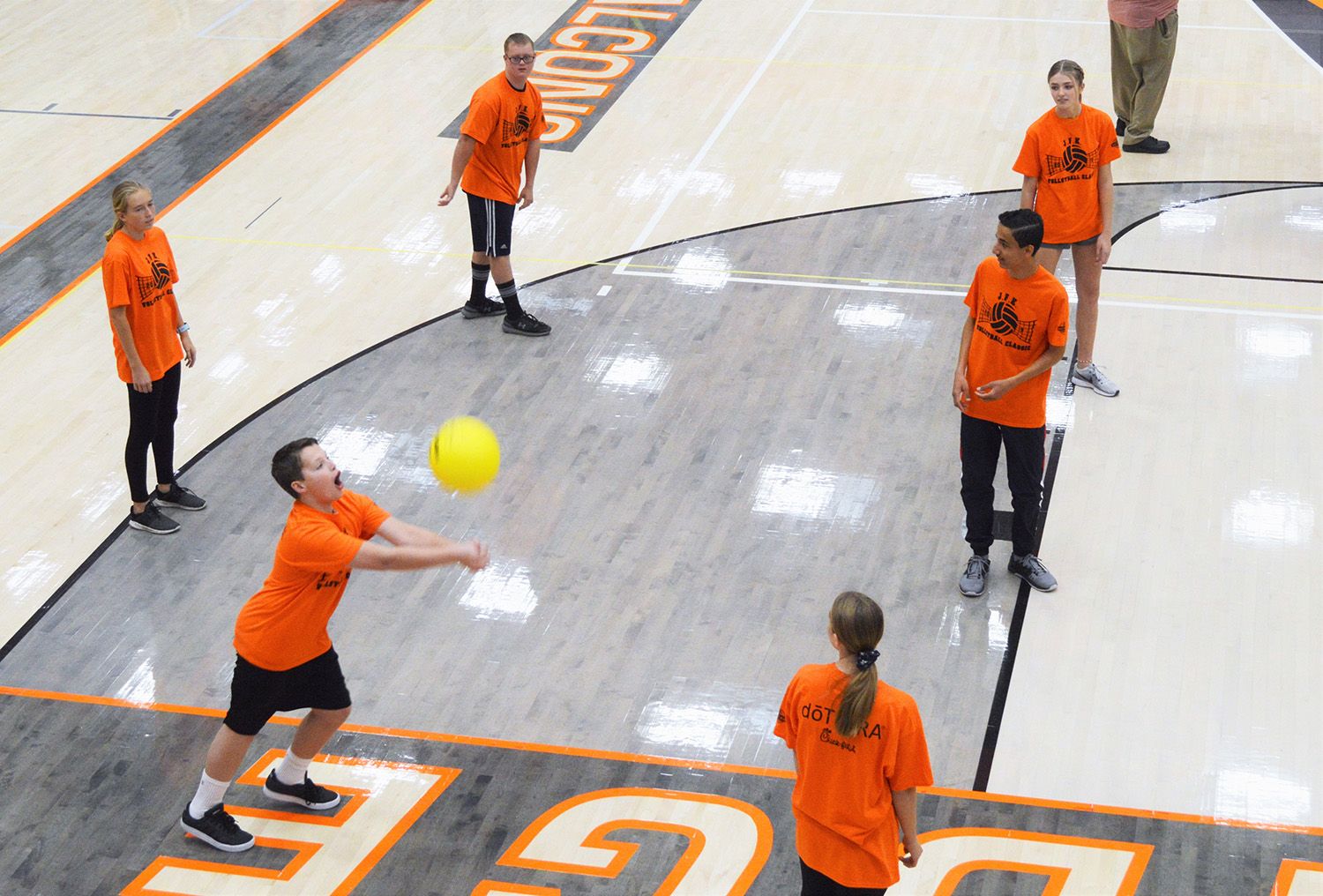 The Just For Kids seventh annual volleyball tournament on Saturday, November 16, was a massive success thanks to local sponsors, volunteers, and the participating athletes. Just For Kids of Utah County is a non-profit organization promoting opportunities and independence for children and adults with disabilities.

The J.F.K. Volleyball Classic outgrew the Lehi High School gym two years ago when they moved to Skyridge High School. The fifteen teams competing in the tournament come from nine different high schools and six community-sponsored teams. Each team has six to eight athletes, athletic partners (volunteers who help the athletes on the court), and coaches.

The tournament starts with an opening ceremony where the teams march into the gym through a cheering gauntlet of cheerleaders and mascots to their place in front of the nets. After the opening ceremony, which included the National Anthem sung by Honorary Miss Lehi Alyssa Eva, the teams made their way to their first match in one of the five gyms at Skyridge High School.

Each match in the J.F.K. Volleyball Classic is two games. If each team won one game, the scores of both games were added together to determine the winner. There was a 20-minute time limit for each match. After eight matches, winners in the high school category and the community category were awarded in the main gym.

“The kids love playing volleyball. We make it as much like a high school tournament as we can. This is one of those fun, feel-good life experiences they love to have,” said Michelle Holbrook, founder and president of Just For Kids.

For the last seven years, the main sponsor for the J.F.K. Volleyball Classic has been doTerra. The local company pays for the team jerseys, medals, balls, and anything else the program needs to buy. Chick-fil-A donated 250 lunches for the tournament.

“I have absolutely loved playing with my sweet team! We have learned more about ourselves and how to work hard as a unit. One of my favorite parts of our season was when the participants were having trouble with their serves. We began playing a new game to bring a competitive spirit to practice. Soon, the players were running to get balls, being more aggressive, laughing, and having fun. My team has brought me so much joy!” said Beatrice Felt, a volunteer coach for the community team, “Net Ninjas.”

The teams practice once a week starting in late August until the tournament in November. The coaches work with the athletes on serving, passing, and setting, then they scrimmage or conduct drills.“This was my second year coaching the Net Ninjas. Each of the kids have an amazing spirit about them that makes me smile. I love that they never let their disabilities stop them from doing their best. They would walk into practice with a smile on their faces, ready to try something new,” said Aleah Mallory. She and the Net Ninjas took home the win for the second year in a row in the Community Division at the Volleyball Classic. “My favorite part overall is seeing how much the kids improve over the season. It’s so much fun to see how proud they are of themselves when they’d make a play or when we won a game,” Mallory continued.