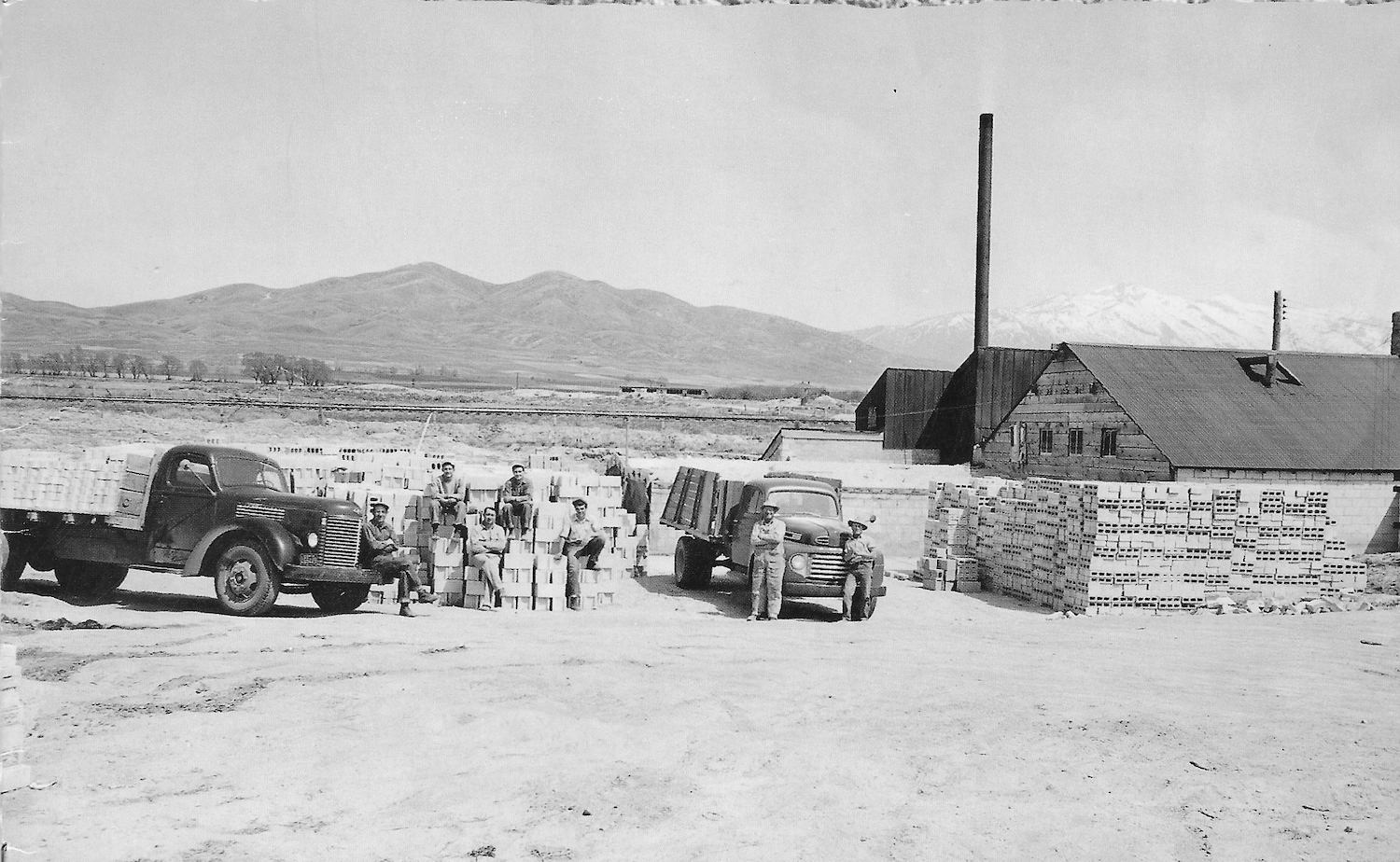 Lehi Block Plant occupied the corner of 2100 North and 1200 West for the last 75 years. The property was sold to the Boyer Company over a year ago. The site will now house residential and commercial development in the coming years.

The business was started by Art Powell and a friend Ted Fox, on Thanksgiving Day, 1945.They walked from their homes after the traditional family gathering to lay out the new concrete block plant on the northeast corner of the property. With a $500 loan from his father-in-law, Tom Sunderland, Art and Ted began plans for construction of the facility. Art had been involved in the concrete industry for years before building what became Lehi Block Company.

Alta, Art’s wife, assisted customers, did office work at home, and cared for their growing family while Art and five employees made concrete block. The first order for block was delivered to the First Presbyterian Church of American Fork.

Eventually, Powell bought out Fox and continued to expand both the plant and the customer base. In 1989, Art turned the operation of the plant over to his son Mac. Alda Mae, Art’s oldest child and daughter assumed bookkeeping duties once handled by her mother. Terry, another son, was in charge of sales. Lorin, another son, was involved, but in an advisory capacity.

While Art claimed he had retired, he still walked two miles to the plant each day to oversee the operation. He passed away at the age of 94, one year after Alta. She was 87.

In 1977, the installation of a block making machine enabled the firm to almost triple its production. The same year, against the advice of skeptics, Lehi Block became the country’s first block company to use the innovative “trac-a-rac” concept, which automatically transported molded block into curing rooms and later to cubing stations.

Many examples of Lehi Block products can be seen around the state. While they ship in the western United States most of the products are used in a 100- mile radius. Structures using the products are Shopko, Wal-Mart, K-Mart, University of Utah, and many schools, churches and commercial buildings throughout the state. Thanksgiving Point has used their block extensively.

When asked about the closure of the business, Mac said, “I will miss customers and our very loyal employees. They are like family to me.” He continued, “I hate to see some of the buildings I helped build being torn down.” Sadness could be heard as he said, “That’s progress and you can’t fight it.”

Alda Mae also said, “I will miss my association with our customers and the opportunity to see many members of our family each day. We have almost four generations working at the plant. A lot of love, money, and time went into the business. We have seen employees get married, start families and grow older here. Don Angus has spent the most years here.” She said, “We have been really busy and it seems like a funeral that has gone on for months.”

Art Powell’s motto was, “We operate on the principles of honesty, integrity, and hard work to produce a quality product.” Little did Art think that what he started in 1945 would produce 75 years of exceptional service to a great many individuals, companies, and families.

Today, the block plant is gone. The Boyer Company has started construction on a transportation- oriented development which will include retail, offices, and residential units. Mayor Mark Johnson has recommended the project be completed in phases because the City has not received official assurances from TRAX that mass transit lines will be constructed in the area soon. The 30 acres is now empty, but plans are complete and construction on the first phase will begin soon.