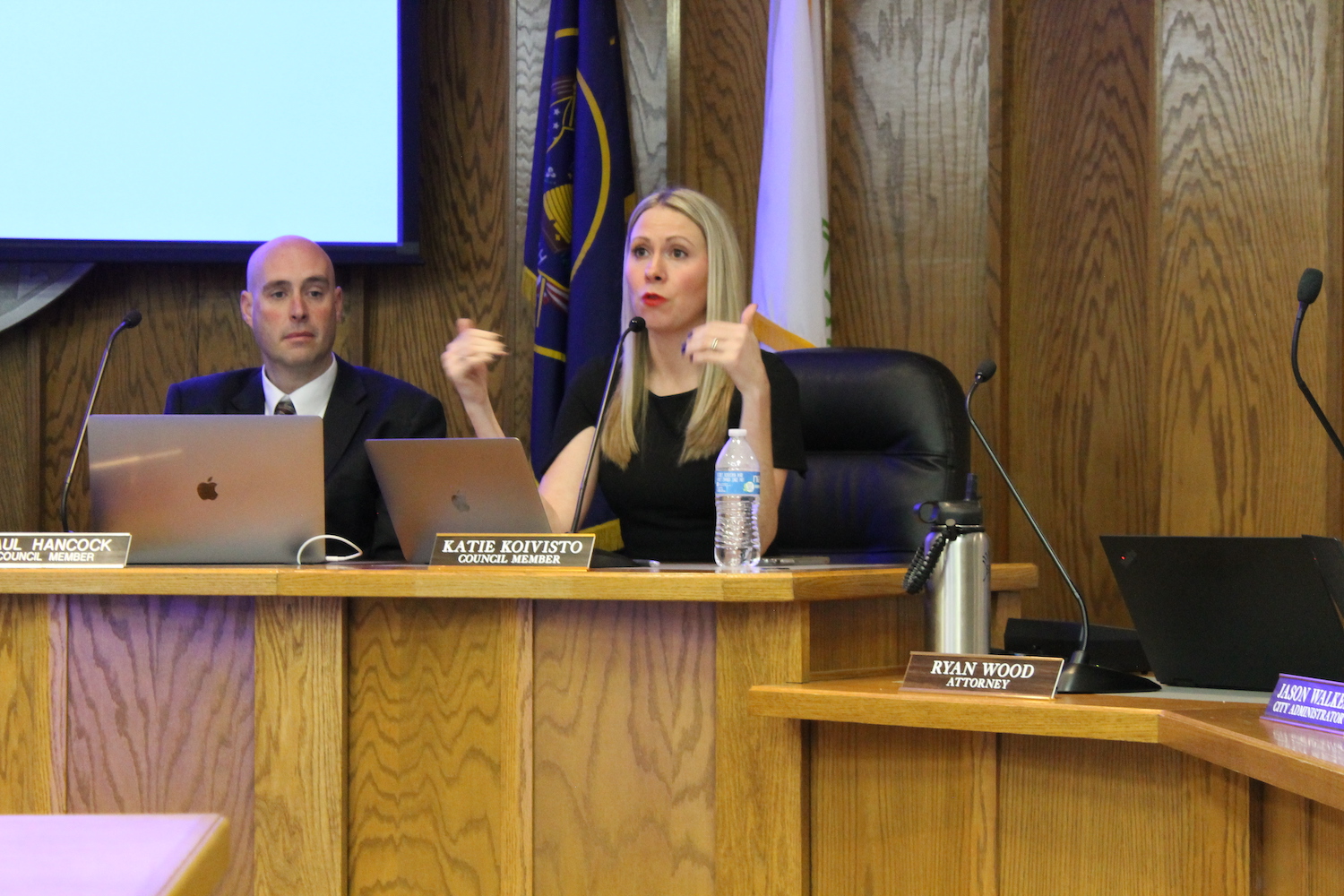 New Year, New City Council. Lehi’s first City Council meeting of 2020 saw the first changed governing body since 2016, with the addition of newly elected Katie Koivisto. Koivisto, who was sworn in Tuesday evening along with re-elected Councilors Paige Albrecht and Mike Southwick. With the departure of 16-year Councilman, Johnny Revill, came a vacancy of the Mayor Pro Tempore position. Southwick, the most senior City Council member, will assume the role after being unanimously selected by the Council.

Ivory Homes presented a preliminary plat plan with 66 single family home units on the former Dixon Mink Farm on Tuesday night. The presented plan was a formality in the building process and was the same plan that the Council approved last year during the concept phase.

Councilman Chris Condie expressed concern about one of the housing units facing into a neighboring existing home’s sightline. After discussion by the Council and review of past subdivisions, it was understood that corner lots in this type of project do have obstructed sightlines. Koivisto, who has been an outspoken critic of recent Ivory Homes projects, said, “I’m a stickler with rules and I think we should follow what the PUD (planned unit development) asks for.” Councilwoman Page Albrecht pushed backed on Koivisto’s comment, “I agree with following the PUD when we can, but the traffic situation is real on 3rd West and to have somebody back out onto 3rd West, I think we should avoid that.” Mayor Johnson suggested looking into a smaller home footprint to mitigate the issue, and Brad Mackay, Ivory Homes Development Director, said that request could easily be accommodated.

Several residents spoke in public comment to oppose the preliminary plat plan regarding setback requirements for PUDs. “The proposed setback is currently 14 feet, according to code, it should be 20 feet and that will look better,” said resident Heather Newall. Along with setback concerns for PUD zoning, members of the public and some Council Members voiced concern with the definition of the word “contiguous,” regarding green space and neighboring properties. Ryan Wood, Lehi City Attorney, committed to look into the definition and work on a clearer understanding for the City to use in the future.

After public comment, a tense exchange between Councilwoman Koivisto and Mackay ensued over setback requirements. “I don’t feel comfortable moving forward with this plan that has been presented with the setbacks that are in place and the ambiguity in the words that have been used. Is it possible that we put this on the back burner?” said Koivisto. Wood, Lehi City Attorney, replied that it is legally ok to table the agenda item but is a decision for the Council and the applicant. Mackay responded, “We take direction from your planning staff, who are professionals, and we have been at this for a year. So, no, we aren’t interested in having it tabled and continuing it, especially at a preliminary plat level.” Koivisto interrupted Mackay, and said, “So you aren’t going to listen to what the residents had to say?” Mackay refuted that notion, “I’ve been listening for a year to what they’ve had to say. This is approved for 66 units, so if you table this, we would come back with your setback requirements and we would put town-homes or condos that comply, but that wasn’t the intent all along. We’ve been working to come up with an acceptable project for everyone over the last year and I think we’ve done that.”

Koivisto then responded, “So you’re threatening per say to change things?” Mayor Johnson quickly interjected to Koivisto, “Pardon, I need to conduct the meeting. Let’s let him answer the questions he has been asked and then if you have additional follow up questions, that’s the appropriate way to do this.” At the conclusion of Mackay speaking, Koivisto glared at the applicant for several seconds and then abruptly asked the Mayor “May I make a motion?” Johnson replied, “When I call for it.”

Later in the discussion after Council Members Paul Hancock and Paige Albrecht expressed support for the preliminary plan and the desire to accommodate the PUD for single family homes over townhomes, Koivisto continued to question the applicant “Why does it have to be so dramatic like that, Ivory?” Mackay replied, “There is a gas line running diagonally through the property, there isn’t enough room.” Koivisto then interrupted Mackay, “Did you know about that before you purchased the property?” Mackay responded “Yes” to which Koivisto exclaimed “Well there you go.”

After over an hour of discussion on the agenda item, Mayor Johnson asked for a motion from the Council. Councilwoman Koivisto offered a motion requesting legal to review the code. Mayor Johnson explained to Koivisto “You have to motion to table, approve or deny.” Koivisto replied, “So, I have to choose one of those three?” She suggested a motion to table the agenda item, this motion failed 4-1, with Koivisto as the dissenting vote. Councilman Chris Condie then offered a motion to approve the agenda item. The motion passed 4-1, with Koivisto dissenting. Koivisto then mouthed “sorry” to the collection of residents who spoke in opposition of the project.

The first order of business for 2020 and Koivisto’s first resolution vote was regarding an increase in fees for garbage service. “What is the change that’s going to be happening, I was not aware, I apologize that I haven’t read that far,” said Koivisto. Mayor Mark Johnson gave an overview of the new waste fee as a result of a new Waste Management contract which has been discussed for the past several months. The increase is due to a drop in recycling commodity prices and an increase in contamination. Lehi residents will see a 30% increase from $10.50 to the new rate of $13.68. The increase was unanimously approved and will now take effect.

The City Council unanimously voted to lease 30 parking stalls from the Legacy Center lots to Brian Brown for the new Main Street building. The lease will cost Brown $7,500 per year.