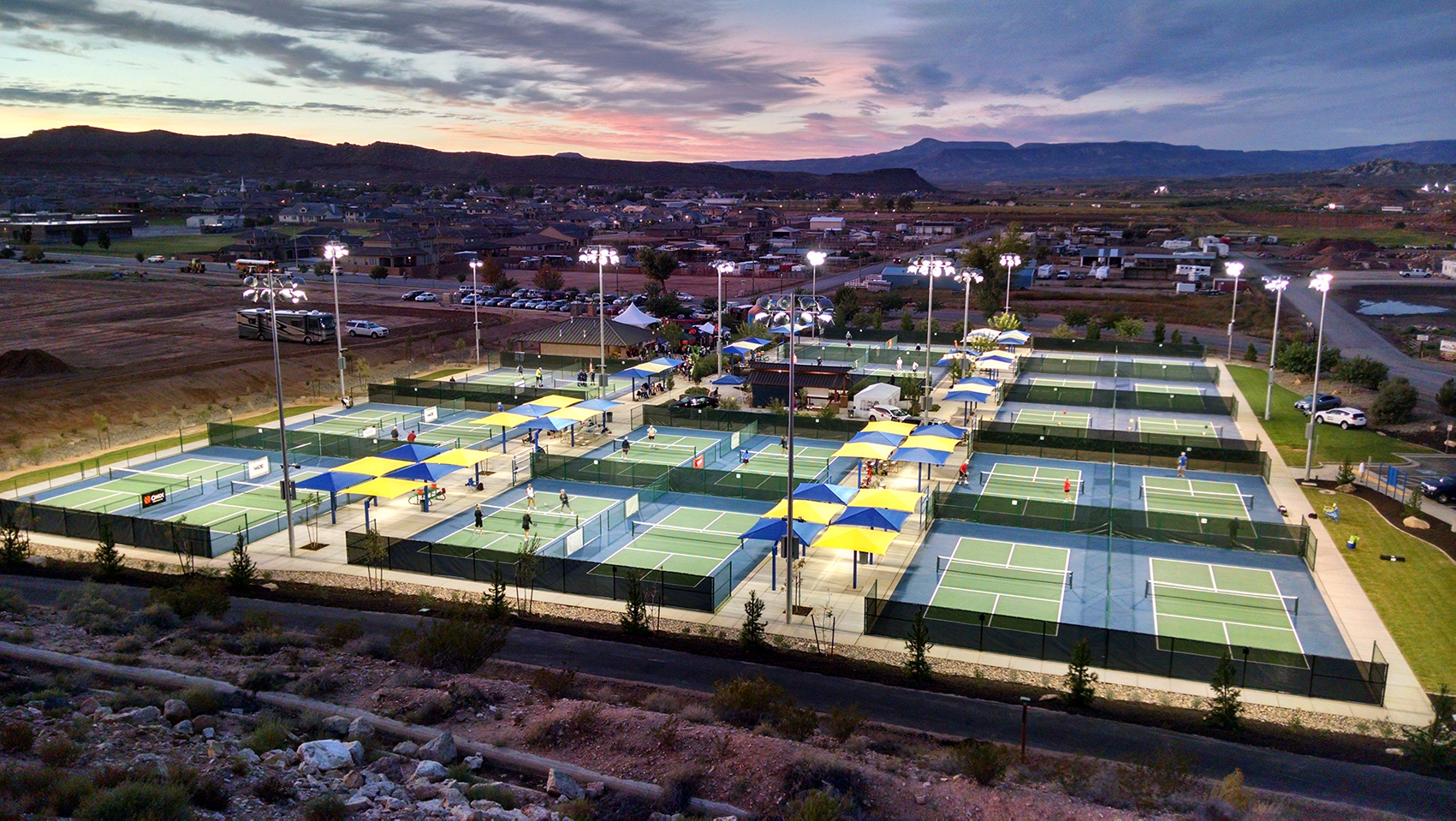 The City Council met on February 25 in the council chambers. Councilman Paul Hancock was traveling and attended the meeting by phone. Councilman Chris Condie was absent due to his wife’s birthday. All other council members were in attendance.

A presentation on pickleball and the opportunity to build a tournament sized facility for the community was presented to Lehi City Council. “I have been playing pickleball for a couple of years now and we have found that it is really hard to find available space to play,” said Lori Le, Vice-Chair of the Lehi Parks, Trails and Trees Committee. “There is a great opportunity that Lehi City has, in building a big complex that we can host national tournaments and bring in a lot of money,” said Le.

Chris Thackeray then offered information regarding pickleball and the increased demand for the sport. “Pickleball has exploded. I have been doing the Alpine Days Tournament, which started with only four courts. This past President’s Day we hosted a tournament in Orem, and we had over 450 players show up. There is a huge demand. Courts are being built but there is an opportunity to build something more significant,” said Thackeray.

According to Pickleball Central, the surge in pickleball popularity is attributed to the diverse populations who can participate, from children to seniors and everyone in between. The sport is also economical, with the average equipment cost less than $25. The presentation also showed that not only are equipment costs lower than traditional sports, the field cost is also lower, as two courts fit on the size of one tennis court.

The proposed complex would include 24 courts and need four to six acres. Le and Thackeray estimate the cost to build would be approximately $1,175,000, with annual maintenance costs of $48,000. Thackeray also expressed that he has received the support of several residents who are willing to donate materials and funds to the project.

When asked by Councilwoman Koivisto about potential locations for this kind of project, Steve Marchbanks, Lehi City Parks Director said, “I think we have the potential for three or four different locations, maybe Mellor-Rhodes, out in Ivory or even the north side of Peck Park.”

Lee Adamson, Director of Athletic Event Sales for Explore Utah Valley also spoke on the economic value of hosting pickleball tournaments. “I recently met with USA Pickleball and showed them images of Spanish Fork’s 16 court complex, because it is currently our largest facility in Utah County, and they were super excited.”

Adamson shared a sample economic impact calculation, using a tournament that Brigham City, Utah will host for five days in May, also mentioning that the tournament is already sold out with 828 registrants. “An event like that in our area would have an estimated economic impact of $414,000,” Adamson said. “That is a regional tournament and there is potential for national tournaments if a 24-court complex was built in Lehi. It would be the largest complex in the state, even bigger than St. George’s.”

The council was presented with some additional information regarding the recently announced Primary Children’s Hospital to be located off of 2100 North in Lehi. The 38-acre five-story hospital with an adjacent three-story medical office is scheduled to be open by the fall of 2023.

Lisa Paletta, IHC administrator for the Lehi hospital also showed a current rendering of the future facility noting features designed to accommodate nearby neighbors, such as placing the parking lot and helicopter pad on the south side, closest to 2100 North. The IHC planner for the project said, “We have tried to be as sensitive as possible, knowing we are right next to a residential area. We have pulled all of the 24-hour services as far away from the residential areas as possible.”

“We want to be good neighbors and interact with our neighbors–whether that is an open house or town hall. We want to be transparent and keep people up to date on this three-year journey,” said Paletta. Councilwoman Katie Koivisto lives in the Holbrook Farms neighborhood closest to the future site and expressed community support for the project, “I’ve only met a couple of residents who are maybe hesitant because of a helicopter or something, but a majority are very excited for this and you guys have done a very good job designing this.”

Councilman Mike Southwick concluded with support, “I’m excited about it and it’s going to be great for the whole community,” said Southwick.

Intermountain Healthcare will hold a public open house this summer with a groundbreaking ceremony anticipated in September.

This proposal was previously presented to the Highland City Council. They elected to not pursue the project.

The council reviewed and unanimously approved the following budget amendments:

1. The Digital Drive road project has gone over budget. $110,000 is being reallocated from two other road projects that have available funds.

Patti Garver, Utah Transit Authority (UTA) Project Manager for Point of The Mountain study, presented the Council with an update on their study regarding the potential addition of mass transit into Lehi. “The key destinations we are trying to connect to are the Draper Prison Site and Silicon Slopes,” said Garver.

The study includes identifying the transit corridor (locations to be served) and the transit mode (Frontrunner, Trax or bus). The factors being considered include surrounding land use, potential ridership, economic costs, and the environmental impact.

Graver stated that the project includes a steering committee consisting of all the impacted city Mayors, including Bluffdale, Draper, Lehi, Sandy, and South Jordan. Public outreach and surveys will begin in late February.

Mayor Mark Johnson also said that Utah County is currently working on its own transit study. “I encourage the public to participate in any public comment that is requested in these studies because I think there is a great opportunity to shape our transportation systems.”

The study began in August of 2019 and is anticipated to conclude by July 2020.

Leah Hermio, a Utah Department of Transportation (UDOT) representative, provided the Council with an I-15 construction update. The three-year project is approaching completion as UDOT focuses on bridgework in the final phase.

“The reason we have all of these traffic shifts and changes is to try and maintain five lanes instead of four. Maintaining ten lanes of traffic while reconstructing the freeway is quite an effort. We want to keep traffic moving as best as possible,” said Hermio.

Hermio also announced a State Street closure for two weekends in April (April 17-19 and April 24-26). The closure will be at approximately State Street and 850 E under the I-15 bridge heading east toward American Fork. The official detour route will divert traffic to Lehi Main Street.

“We are trying to balance night demolition with a huge amount of traffic that the area has. This closure will help save three weeks of work,” said Hermio

Consideration of ordinance #11-2020, approval of the Osmond Annexation, approximately 6.46 acres located on Digital Drive by the point of the mountain with proposed commercial zoning. The applicant announced a future office building. By Jared Osmond. Unanimously approved.

Consideration of Resolution #2020-11, appointing Katie Koivisto as a Board Member to the Timpanogos Special Service District. By Lehi City. Unanimously approved.

Consideration of Resolution #2020-12, appointing a Lorin Powell as a Board Member to the North Utah County Aquifer Council. By Lehi City. Unanimously approved.