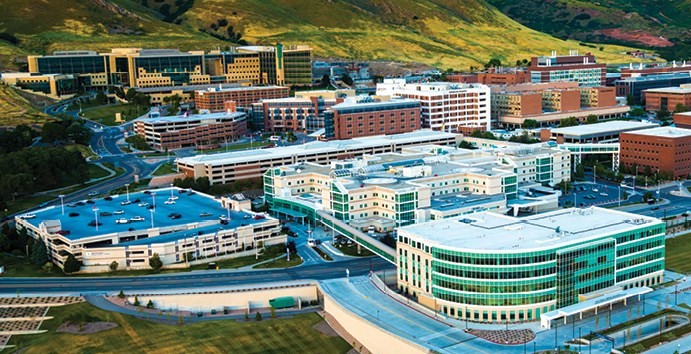 The Lehi City Planning Commission met for their regular meeting on Thursday, March 12, just days before the recommendation to keep gatherings to ten or fewer people. Members of the Planning Commission and City Council canceled the rest of the “in-person” March meetings and April business is still in question. The upcoming planning commission meeting to be held on Thursday, March 26 and the City Council meeting on March 31 will still be held but will not be open to the public. Residents may view these meetings online and may comment in real-time through a link on the city website.

In the March 12 meeting, Bern Seagers from EYP Architects presented the concept plan for Primary Children’s Hospital in Holbrook Farms. The hospital and clinics are on 38.39 acres with 486,000 square feet of building, a five-story hospital and a four-story clinic. The site plan also included outdoor spaces and landscaping. “Intermountain has an emphasis on kids and family, always making sure they can get outside. This is an incredible piece of property – it’s going to be an asset not only for the Lehi community but for the entire county,” said Seagers.

Commissioner Abram Nielsen asked Seagers about a circular road near the hospital entrance, a road the DRC suggested be removed. “Sometimes in pediatric facilities, a mom will come to a site a little bit frantic and she might not come to the right entrance, so we put in a loop road so she can navigate to the right entrance, to the main front door,” Seagers explained. The architects removed part of the loop road but kept the footprint of it for possible future build-out. Intermountain Healthcare is keeping the west side of the property open for future expansion, including a possible women and infant facility.

“Thanks to IHC for making this investment in our community. There is a definite need for something closer. This is going to create employment opportunities, too. When you build a good hospital, good people come with it,” said Planning Commission Chair Matt Hemmert. The motion to approve the Primary Children’s Hospital concept was unanimous.

Dan Payson with Yesco came to the Planning Commission to request three exceptions to the Development Code on an electronic pylon sign for the Ken Garff auto dealerships on Ashton Blvd. First, Payson asked that the sign be 70 feet high instead of the maximum 25 feet allowed in the current code.  The code makes room for exceptions to the 25-foot limit when businesses are adjacent to overpasses or other site-obscuring features. The second request was increasing the square footage of the sign from 200 square feet allowed by the code to 794.31 square feet, an exception Yesco requested because the company owns multiple land parcels. Finally, Yesco wanted the electronic area of the sign to be 400 square feet, which was more than 50 percent of the sign area allowed in the code.

“We want one sign to work for all the dealerships on the property rather than have several signs. The placement gives customers more drive time before they need to exit,” Payson explained. He based the height of the sign on nearby signs.

“One of the biggest mistakes we as a community have made is death by a million exceptions when it comes to billboards. At this point, you can see the Traverse Mountain Outlet sign from south Utah County. It has created light pollution, destroys the night sky, obstructs views – to be frank, it’s an eyesore. I would respectfully ask that we hold onto our rules. They can build the signs the code will allow. This is not a case that merits significant exceptions,” said Lehi resident Rob Ludlow.

“I can tell by the color on the back of my house what store is being advertised on the Traverse Mountain Outlet sign and I live over a mile away. A sign this large will have a calculable impact on the nearby homes – and this one is closer to homes than the outlet sign,” said Kenny Newbry, a Lehi resident in the Cranberry Farms area.

“Most of our sign standards were not in place when the Traverse Mountain Outlet sign was approved. We’re trying now to protect the I-15 Corridor, which is the true introduction to Lehi for those passing through,” said Commission Chair Hemmert.

“Do we really need 70 feet? I haven’t seen anything to show 70 feet is the magic number. We’re already going beyond with this site with parking and building signage,” added Commissioner Jared Peterson.

“We should stick to our standards. We don’t allow billboards in that area and this is the equivalent of two billboards in a roundabout way. They’re saying there are sign-obstructing features, but what about the views the sign itself is obstructing,” said Commissioner Abram Nielsen.

Members of the Planning Commission went through chapter 12 of the Development Code and discussed each item before determining that the exceptions to the code Yesco and Ken Garff were requesting were not compliant. The motion to deny the conditional use request passed unanimously.