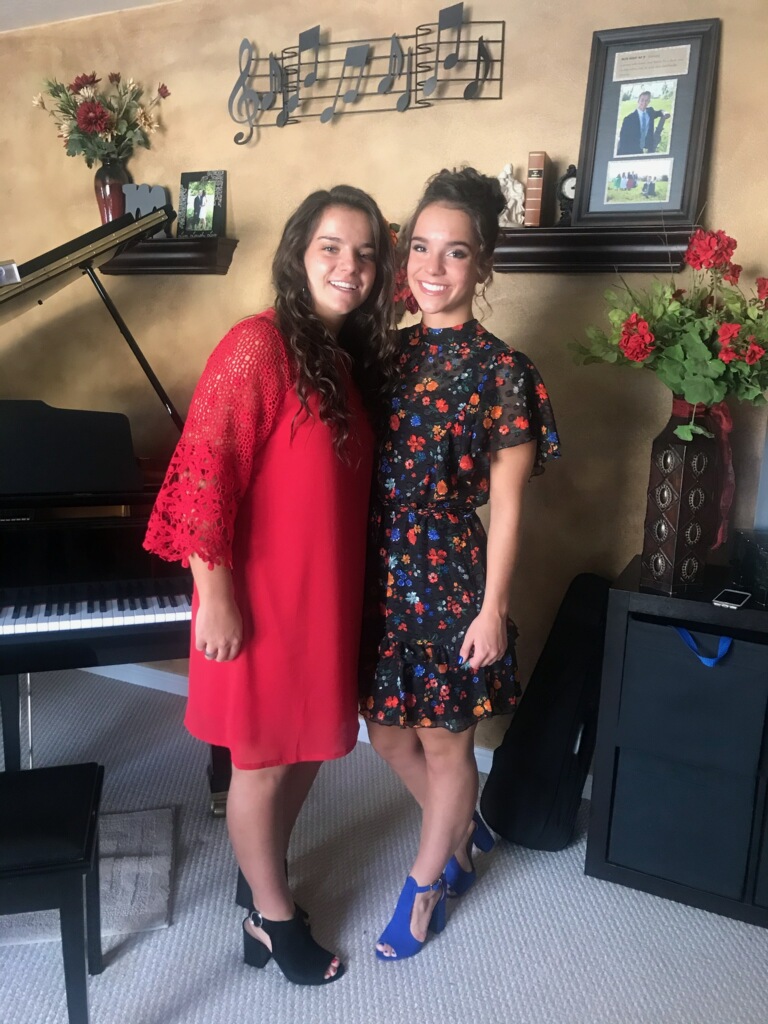 Two unworn prom dresses are hanging up in the Melling family home. For Sydney and Keylee Melling, twins who are seniors at Skyridge High School, their new normal amid COVID-19 closures has meant an early end to their athletic events, a nonexistent senior prom, and the possibility of graduation ceremonies being canceled.

“It has been really sad,” Sydney said, “you always look forward to that kind of stuff.”

Utah’s students have transitioned to online learning models after the spread of COVID-19 led to the soft closures of schools statewide. The closures will last until at least May 1.

The Alpine School District’s planned graduation ceremonies have not been canceled.

It’s been a jarring transition for the Mellings.

“It is a hard adjustment, but the teachers have been good with us and giving us time to get into the zone for this type of thing,” Keylee said. “I think it was hard at the beginning, but once you get into the group and understand what you’re doing, the transition has been easy.”

Keylee played both basketball and softball for Skyridge High School. While she still had her senior basketball season, she was only able to play six preseason softball games before events began being canceled. Now, the team isn’t even able to practice.

“It has been really kind of sad because you have been working your whole life to really go off with a bang your senior year, and to get it taken away from you is really devastating, but it also makes you grateful for all the years you had playing,” Keylee said.

Sydney’s club dance competitions have also been canceled. Her team continues to practice at home, just in case some get rescheduled. She doesn’t think her school team’s traditional year-end concert will happen but is hopeful their end of the year banquet can still take place.

The twins are trying to look at losing prom in a positive way. Both have attended proms before, and their dates plan to do something to make up for it.

They’re still holding on to hope that graduation ceremonies won’t be canceled.

Their mother, Lezlie Melling, has suggested they wear their prom dresses under their caps and gowns for graduation ceremonies at home. She’s disappointed that they might miss a traditional ceremony.

“I know that these guys may lose that opportunity to have one last hurrah with the friends they grew up with,” she said.

Either way, they’ll still send out graduation announcements and take pictures. But she also understands that graduation would likely be the last time the students ever see most of their high school classmates.

“We will try to make it as special for them as possible, and there’s no way we can replace that time with their friends,” said Lezlie Melling.

The family has been practicing social isolation to protect those who are more vulnerable to COVID-19. Lezlie Melling has encouraged the girls to go outside every day and exercise.

Both girls are athletic and have found getting their heart rates up helpful in getting through the new normal.

“Working out and staying fit, during a hard time in our life and everyone else’s, is super beneficial because when you just sit around and do nothing, you feel terrible, but when you are out exercising, it makes you feel better about yourself,” Sydney said.

Shiloam Chapman, who works as an aid at an elementary school, was preparing packets when she realized that coats were still in cubbies, water bottles were on desks, and lunch bags had been left behind.

“It is really weird,” she said. “We expected to hear kids come running in to grab those things and it doesn’t happen. You feel there is a void.”

Her son Skyler, a senior at Lehi High School, didn’t know that the last day he was at the school may end up being his last day inside of it.

He feels different, he said, because it’s his last term of high school and seniors are trying to make every day count.

“It definitely feels like there is something missing,” Skyler Chapman said.

He’s fallen in love with the school and the activities he’s been a part of, which have included shooting photos from the sidelines when the football team made it to the state semifinals for football at Rice-Eccles Stadium.

He created a public service announcement video for a class when he was at a low spot and was missing his friends and being in school. The message, directed at the Class of 2020, lets other students know that it’s ok to be missing things.

The hope now is that prom, which was scheduled for the end of March, can take place at the school in the future.

Shiloam Chapman is holding out hope that graduation will still occur as scheduled.

“It is better to be optimistic than pessimistic at this point,” she said.

The Chapmans’ experience shifted on March 28, when they received a phone call that they’d been exposed to someone who has been diagnosed with COVID-19. They’ve been in voluntary quarantine ever since, doing video chats with friends, watching movies as a family, and working on a massive puzzle.

Years from now, when Skyler is talking to his future children about high school, he said he’ll remember taking pictures on the sidelines of events and supporting teams. COVID-19, he said, won’t erase those memories.

“My time is not defined by this virus,” Skyler said. “It is defined by everything else that came up to it.”

Central Bank gives $350 to every employee