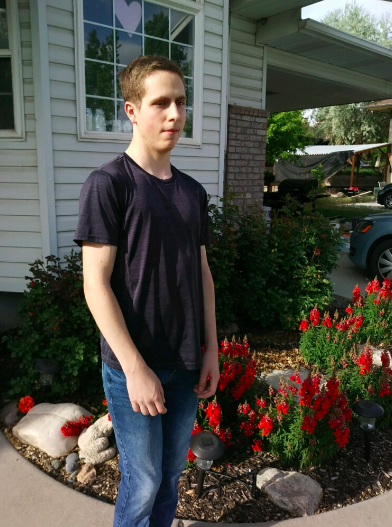 The question wasn’t if Alex Thompson would graduate, but when.

“I didn’t know if it would be this year,” said JaneAnn Thompson, Alex’s mother.

Alex graduated this year from Lehi High School, on time, amidst the global COVID-19 pandemic that has made classes harder for him as they’ve transitioned online.

School hasn’t been easy for Alex, who was diagnosed with autism in the second grade. JaneAnn had noticed since he was a baby that Alex was different. He didn’t make eye contact, didn’t say his first word until he was almost three years old and didn’t walk until he was 18 months old.

“The word ‘autism’ just kept popping into my brain, and I’d ask, and they’d say it’s too early on to give a diagnosis,” JaneAnn said.

He was diagnosed after his second-grade teacher pursued it. That official diagnosis, JaneAnn said, made school easier because Alex was able to get medication.

School can make an autism diagnosis difficult, with bright lights, loud noises, and crowds potentially overwhelming to those on the spectrum.

“It is about the surroundings,” Alex said. “If something is annoying, I have to walk away.”

JaneAnn said she’s never had to bug Alex about getting up for school. He’s had to occasionally stay after school or use his flex time during the day to get extra help.

“It is usually teachers and adults checking in on me every once in a while,” Alex said. “I really appreciate it.”

JaneAnn said she knew that Alex would have a better chance of graduating because they were able to get help.

She said Alex is a kind, honest person with a good sense of humor who pushes to achieve his goals.

“He tries hard whenever he sets out to really accomplish something,” she said.

Alex watches shows in Japanese and has taught himself some of the language.

“Sometimes I would correct the subtitles based on context,” he said.

He has a passion for music and has been in orchestra since the sixth grade. He plays the violin and has taught himself to play the keyboard. He can also play the viola and has tried the cello.

At school, he’s known as being service-oriented after concerts.

“He would help stay after, clean the room and stage, doing the extra things,” said Brian Parker, Alex’s orchestra teacher.

“When I first met him, he was extremely quiet and very much to himself,” Parker said. “In a lot of ways, he is still that way.”

Parker said Alex is committed and dedicated to playing music. Finding something that Alex loves, Parker said, has helped Alex forget about struggles in other classes.

This year, Alex decided to be a part of both the chamber and the concert orchestra, which requires an audition.

“I’m really proud of Alex and what he’s done to graduate, and I want to congratulate him on taking this step,” Parker said.

Alex, who is the youngest of seven children, chose not to participate in Lehi High School’s in-person graduation ceremonies. He didn’t want to wear a cap and gown, and after making him do other things he hadn’t wanted to do, his family wanted it to be his choice.

“I don’t want him to feel uncomfortable,” JaneAnn said.

The school, she said, has helped make Alex’s education easier.

“The people at the school have been so helpful,” she said. “They are just very, very accommodating, and their greatest desire was for Alex to be happy, and they treated our family and Alex with such kindness.”