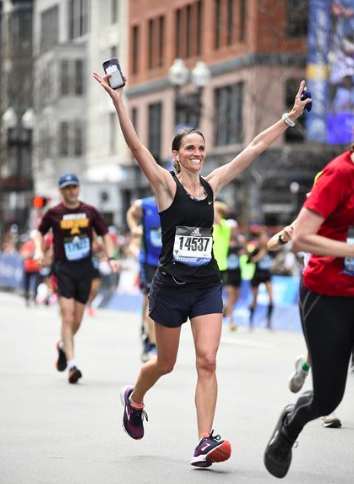 “There is nothing better than race day for me,” she said. “It is like Christmas morning. It is like adrenaline. I’m not a competitive person until race day, and then suddenly, this other person comes out of me.”

Hackett will typically run one half marathon a month, but as the COVID-19 pandemic has led to postponements and cancelations, she hasn’t signed up for races that likely won’t happen this year.

The Utah Valley Marathon, which posted on its website that it had already spent $200,000 in mostly non-refundable costs before the event was canceled, offered runners the chance to defer their entry to 2021, or to keep their entry and do a virtual race.

The Thanksgiving Point 2020 Tulip Festival 5k was rescheduled until restrictions on public gatherings are lifted. The postponed race will run along the same course in the Ashton Gardens. If a runner doesn’t want to participate in the postponed event, half of their entry fee will be refunded, or they can transfer to the 2021 event with a $10 transfer fee. They may also donate their registration fee to Thanksgiving Point.

Hackett had planned to run a full marathon in Las Vegas, along with the American Fork Canyon Run Against Cancer’s half marathon. She wasn’t able to get a refund for the Las Vegas race but did get a credit.

“I was not surprised just because of everything that was happening,” she said.

Gym and school closures have shifted her training. She’s found herself running outside more, upping her miles from 50 to 60 a week and hitting more trails.

“I haven’t run this many miles in a long time, I’m not injured, and I feel good,” Hackett said.

She’s tried to stay neutral about the situation.

“It is frustrating when you have trained for a full marathon, but then it does get canceled, but at the same time, it was to keep everybody else safe,” Hackett said.

The cancelations have meant that Chandler Blake will be unable to cross an item off his bucket list this year.

Blake signed up for the Boston Marathon after receiving a qualifying time in late 2018. After booking his hotel and flight, the race was delayed, and then later canceled.

“Any serious runner, it is their goal to check it off their list,” Blake said.

Blake is primarily a triathlete and trail runner who doesn’t prefer road races, but depending on what is announced, he may have to qualify for the 2021 Boston Marathon by completing another road race.

Blake travels for work and was able to get his travel points refunded for his flight and hotel, which can be up to $350 a night in the area around the race.

An IRONMAN he signed up for was postponed, and he recently completed the Squaw Peak 50 Mile Trail Run. The race, which usually has 300 runners who start at the same time, had staggered race times in groups of 50 runners this year. Workers at aid stations wore masks, and runners were required to put on a mask when approaching the stations.

“I think people were more conscious around other people,” Blake said.

The race also discouraged congregating near the finish line and had pizza available instead of its traditional pre- and post-race dinners. A single family member could pick racers up, if necessary, instead of providing a cheering squad along the trail.

Blake is always in training mode and doesn’t take an offseason. He’s constantly biking, running and swimming, and his routine was impacted when the Lehi Legacy Center closed for several weeks. The increased biking and running, he said, has taken a toll on his body, and as he’s returned to the pool, he noticed his endurance reduced and his swimming is slower.

Before COVID-19, he competed in five to eight races a year.

“I think I have just taken it in stride,” Blake said. “When I look at it, I look at the bigger picture and think it’s just racing. I’m bummed, but it’s not affecting my livelihood like it is some people.”

Ben Christensen has had to change his training after the IRONMAN St. George was postponed from the first weekend in May until September.

He started training for his first IRONMAN in January. Now, race day conditions will be different than what he planned.

“It is going to be warm,” Christensen said. “It definitely changes the race.”

Warmer water means that wetsuits won’t be allowed for the swimming section of the race. The suit adds buoyancy, which makes it easier for the racers to swim. Christensen expects the change will slow him down in the water.

He was planning to compete in other races after the IRONMAN, but those plans have shifted as he’s restrted training to be able to peak for the race.

“I couldn’t have kept training at the level I was training at,” Christensen said. “I would have burned out.”