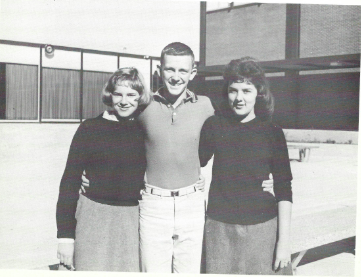 This was to be the best of all Lehi High School class celebrations, but COVID-19 forced the committee to re-think creative ways to bring the class together.

The class of ’60 was the first graduating class of the new Lehi High School. Under the capable direction of Principal Dale Price, the new school brought new energy and opportunities for the students. To help celebrate the event, Deanne Schiess Cardon said, “Mr. Burton, the choir director, organized a school choir. We sang at church functions, the dedication of the new high school and the groundbreaking of the new stake center of The Church of Jesus Christ of Latter-day Saints. We also took two first-place ratings at the district competition held at Tintic High School.”

As always, sports dominated a lot of the time and attention of students, parents and coaches. Lehi’s football team shared region second-place honors with American Fork. Coaches Crittenden, Manning and Oyler worked the players overtime to prepare them for the season. One player said it was not unusual for the coaches to have the players run to Utah Lake and back. “We were in great condition when the season started.” Coaches told the players if they beat American Fork, Lehi’s biggest rival, they would run a lap for every point Lehi bested the Cavemen. Lehi won by 32 points, and the coaches ran the laps.

The basketball team took fourth in the state tournament that year. In the tournament, the Pioneers only lost one game against the Juab Wasps by a slim three-point margin. The Wasps went on to become the 1960 State Champions. The basketball team was led by Doug Hadfield, Ralph Price, Mac Powell, Brent Peterson, Marvin Wilcox, Kent Wells and Ben Woolsey.

Cardon fondly remembers the Senior Hop, themed, “Wonderful, Wonderful.” The gymnasium was turned into a wonderland with an arch of silver ferns, a waterfall and an amazing mural painted to cover the entire width of the gym. Hundreds of stars were hung from the ceiling. A group of students called the “Hoppin 8” prepared a dance they performed during the intermission of the dance. “We practiced the dance during school if you can imagine that,” Cardon added.

Penny Holcomb Adamson remembers how fun lunchtime was. “Everybody ate school lunch, and the food was great.” Adamson was one of the four LHS cheerleaders. She remembers working extremely hard to cheer on the teams. “We made signs, planned pep assemblies, and attended all the games. Our student body was the best in our region.” Roberta Peterson Nelson, Linda Kirkham Mecham, Linda Kirkham Smith were the other three cheerleaders.

According to Cardon, “Of 105 graduates, 42 are no longer with us. We are 78 years old, and the majority of us are doing ok. We have decided to meet every year rather than the typical every five years. Our committee consists of Doug Hadfield, Mac Powell, Edna Halsey and me. We have been the planners for many years now. It is something we all enjoy doing. We have remained a close class over these many years.”