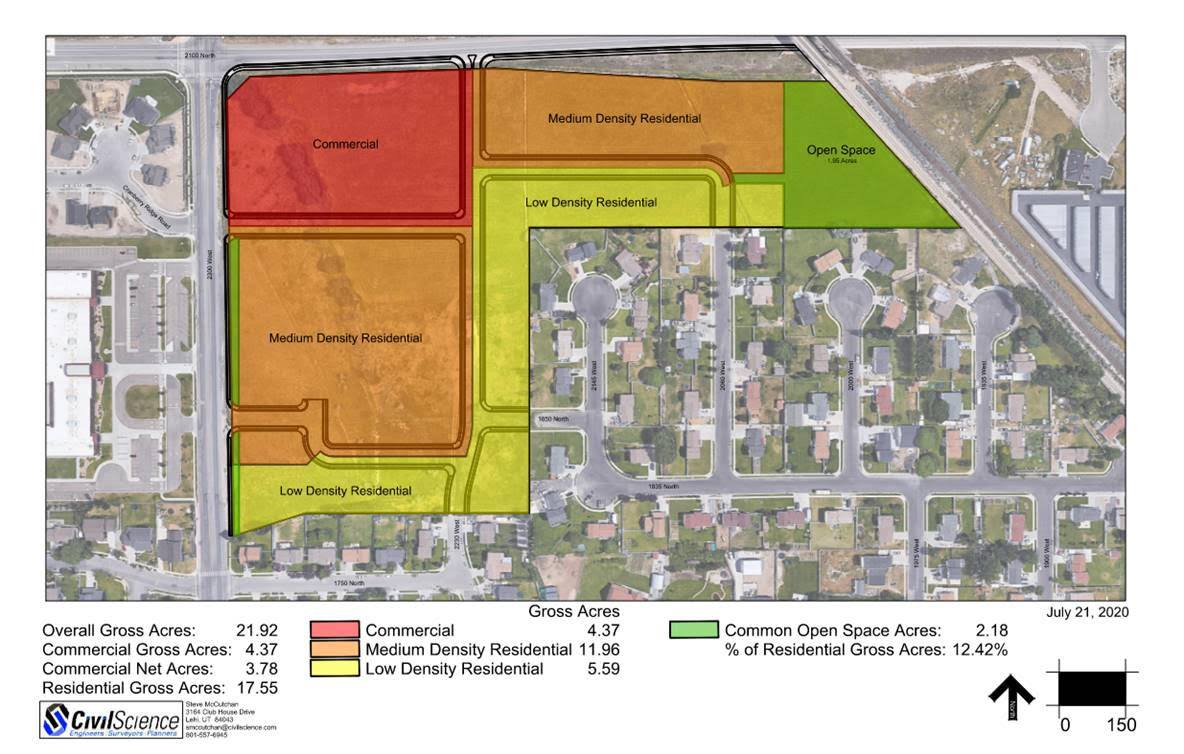 The Lehi City Planning Commission spent almost half of their regular meeting on Thursday, August 13, discussing a zone change on the corner of 2100 North 2300 West. The video feed of the meeting had poor sound quality, and Lehi residents who submitted comments on the controversial issue were left wondering if their voices had been heard as the public hearing was open and closed without comments read out loud.

Dave Morton, who was present in the virtual meeting, represented X Development’s request for a review of the General Plan amendment changing the designation of approximately 21 acres at 2100 North 2300 West from NC (neighborhood commercial) and LDR (low density residential) to C (commercial) and MDR (medium density residential). Lehi City staff gave the request a neutral recommendation, but Lehi City Engineer Ross Dinsdale said the increased density could be accommodated. “This is at your discretion. They’re not asking for neighborhood commercial; they’re asking for commercial. It’s a total departure from the General Plan,” said Kim Struthers, Community Development Director for Lehi City.

“We’ve been working on this for several months and we’d like to incorporate a good development in this area. We know that we will most likely not make everyone happy,” said Dave Morton. “We all know 2100 North will be a freeway someday and this development is a good buffer between a residential area and what will be commercial in the future.” Morton explained that commercial development traffic patterns are the opposite of residential and the development would take pressure off 2300 West, a notoriously busy street with school traffic and commuters converging during rush hours. X Development is working with the Utah Department of Transportation (UDOT) to create more access to the future development on 2100 North.

Morton was presented a list with the main concerns of residents in the area; additional homes will put more pressure on 2300 West, children will need an additional crosswalk to North Point Elementary, more traffic calming measures are needed, fencing between commercial and residential areas, and concerns with high density uses. Morton mentioned plans for adding a crosswalk on 2300 West and downplayed the effect of medium density versus low density housing in the area. He also said X Development is working with residents to allay their concerns in the future.

Commissioner Abram Nielsen filled in for Commission Chair Matt Hemmert who was out. Nielsen opened the public hearing and acknowledged 30 comments had been sent in with 29 of the 30 opposing the proposed development, then closed the public hearing. Frustrated residents aired their concerns on social media later, objecting to X Development being allowed to present their side of the issue while public comments were not read out loud and no residents were present at the online meeting.

“Obviously 2100 North is a major collector and it’s going to give you quick access to I-15. I think the additional connection to 2100 North will be a huge benefit, not just in this development but to the south and east,” said Nielsen.

“What would you say to residents who are fed up with traffic in that area? People with children going to North Point Elementary see this as bringing more problems – why are we allowing more development in an area that is already a bottleneck? There is a moratorium on development just south of here,” said Commissioner Bill Hereth, referencing the Thanksgiving Point area.

“The key difference with this location and Thanksgiving Point is that Thanksgiving Point has an area plan. They planned for a certain level of traffic and they’ve far exceeded it. They’ve had very good success getting businesses to come in, but now they have excessive traffic in the area,” explained Ross Dinsdale. The proposed development of X Development is in an area that is still open.

The commissioners agreed that the new roads along with additional curb and gutter on 2300 West would improve access for school children to North Point Elementary and give residents another route to 2100 North. “The most problematic thing for me is the change from neighborhood commercial to commercial. Neighborhood commercial has suitable limitations for the area and would be a good buffer,” said Commissioner Tyson Eyre. Morton explained that the commercial designation would allow for buildings over 5,000 square feet. “We didn’t want to prohibit something like a neighborhood bank,” said Morton.

After more than an hour of discussion on the X Development request, the commissioners voted on a motion to recommend the zone changes to the City Council. The motion passed by a vote of five to two with Commissioner Brent Everett and Commissioner Jared Petersen dissenting.

The Planning Commission unanimously approved the following requests at the August 13 meeting:

Brad Sunderland’s zone change on a one-acre property at 1765 North Trinnaman Lane from A-1 (agriculture) to R-1-Flex (residential).

Rob Molling’s conditional use for the 1% Fitness Meal Prep Service, a food truck kitchen located in an existing building at 305 South 850 East.

Lehi City’s Development Code amendment to Table 05.030-C, changing Mixed Use Single Family Residential and Commercial Construction/Project to a permitted use in the Mixed-Use zone.

Lehi City’s Development Code amendment to Chapters 16 and 17, adding a list of potential items for a density bonus in PRD and PUD developments.