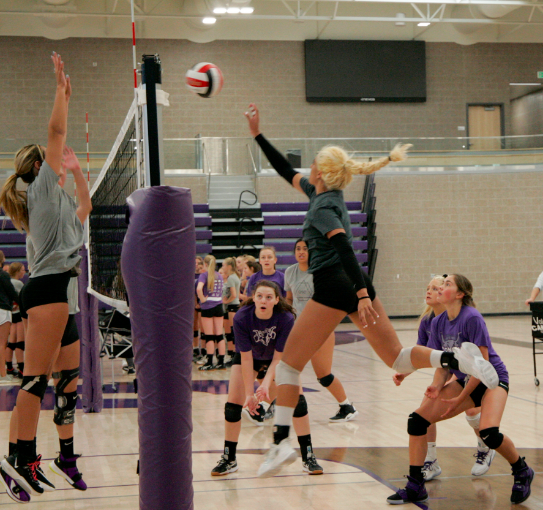 After finishing third in the state tournament for the past two seasons, the Lehi girls volleyball team is hoping to make it to the final this season under new head coach Kolton Rader.

This is Rader’s fifth year with the program but his first in the top spot. “We’ve put a good group together and we’re practicing hard,” he said. “We’re hitting the weight room and getting ready for the season.”

The team has a solid corps of returning players, including outside hitter Haylee Holker, setter Macey Faddis, opposite Amelia Gibson, outside hitter Avery Shewell, libero Bailee Holland and middle blocker Divine Faleao. Only Holker and Faddis are seniors; the rest are juniors.

“All of them should see significant playing time,” the coach said. He’s especially pleased to have Shewell on the court. At 6-foot-1, she’s “one of the better outside hitters in 5A,” Rader said. “We’re happy she’s back and healthy and ready to go.”

He’s also excited to see junior middle blocker Adrianne Lyman. “She was out last year with an injury. We expect her to be a key player for us this year in the middle,” the coach said. An unexpected bonus was junior outside hitter Ajah Rajvong, a transfer student from Hawaii.

“We’ve gone pretty deep the last two years at state, but we’re geared to getting into that championship match this season,” the coach said. “With our returning talent and new additions, we should compete very well in our region.”

Having defending state champion Mountain View to face will provide a good test during the regular season. “We’re hungry and working hard,” he said. “If we can keep everyone healthy, I think we can be there.”