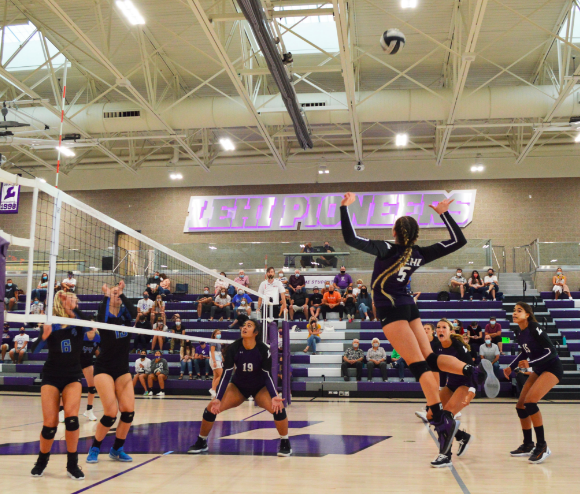 The Lehi volleyball team started the season with a close loss to defending 6A state champion Pleasant Grove 3-0 at home on Aug. 18, then defeated Salem Hills in a thrilling comeback 3-2 on the road Aug. 20.

During the second set, Lehi and Pleasant Grove traded leads many times, with Avery Shewell’s kills keeping the Pioneers in the game, on the scoreboard and mentally.

The 6-foot-1 junior outside hitter was named the best high school volleyball player in Utah on MaxPreps.com on Aug. 20, and Shewell’s 22 kills, two blocks and 27 serve receptions paced Lehi’s efforts throughout.

The teams battled through several set points before Pleasant Grove was able to close it out. The third game was also contested to the final whistle.

“They played pretty well,” said Coach Kolton Rader. “I think we need to be more aggressive in our serving and passing. We learned a lot from this team – this is a good PG team with a great coach and a lot of talent.

“It was a good game for us to see how we stack up against a state champion team,” he continued. “If we play a little bit cleaner game and get more aggressive on serving and defense, I think we’re going to see a different outcome.”

Players from both teams who weren’t on the court and fans wore face masks during this first volleyball home game in the new gym.

The crowd was enthusiastic, if muted, doing their part to allow the athletes to have their season during the coronavirus pandemic. A small student section made serious noise cheering on the players.

Despite classification changes, Lehi has had to beat Salem Hills in the third-place game each of the past two state tournaments. Rader identified this road match as an important early test for his team’s readiness to compete this season.

“I thought that we came out a little worried to make mistakes and through the first two sets we were playing not to lose rather than playing to win,” Rader said.

“That was something that we talked about a lot in our team huddles, leaving it all on the court and doing whatever it takes to win,” he continued. “In the third set that finally set in and we settled down and played a much better game with lots of grit and determination to win.

“Salem Hills is a good team that is very well coached and they will win a lot of games this year so we were excited that we were able to walk away with the win,” the coach concluded.