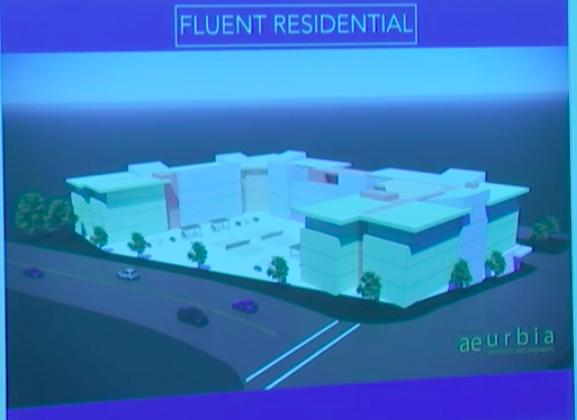 The Lehi City Council met for it’s supposed final online meeting on Tuesday evening with all councilors present. It was the shortest meeting of the year, with a regular agenda that only lasted 44 minutes. The meeting, however, wasn’t short of discourse.

In the meeting’s pre-council, the council was presented with a potential project by the developers of the Fluent Home site near 1200 W.

“This is just for your thoughts and feedback,” said Mayor Mark Johnson to preface the agenda item after extending the invitation for the developers to present in the pre-council meeting.

Mckay Christensen, the representative for the Fluent Home site, started the conversation by expressing concern for the future of office buildings.

“The nature of the office is changing because of COVID,” said Christensen. Christensen also anticipates office vacancies to rise and the need for the industry to adapt to new work from home models that many businesses have been using for the majority of 2020.

“This is just to have an open dialogue. We want to see if this is something you are even interested in,” Christensen said as he presented early renderings of the project.

The presentation paused as Councilwoman Katie Koivisto expressed disapproval of allowing Christensen to present the Fluent concept to the council without filing an application.

“Shouldn’t this be going through the proper steps before being presented to us like this?” said Koivisto, who wanted the applicant to go through the application process and pay the required fees before bringing the item to the council.

“There was not an application made. They just requested to come and present to see if the council would be interested before they make an application. This isn’t completely uncommon,” said Mayor Mark Johnson. “There is no weight behind this meeting whatsoever.”

“I just want to make sure we are holding everyone on the same standards,” Koivisto said.

The presentation continued for the proposed apartment complex north of the Fluent headquarters site on Bull River Road. The proposal included a total of 135 units consisting of 45 studios and 90 one-bedroom units along with 180 parking stalls. The building would be four stories high and be built in a “u” shape.

“This is geared toward a higher-end wage earner, higher-end rent per square foot, this isn’t like The Seasons or Cresthaven,” continued Christensen. “Single working professionals and newlyweds with one child or fewer. That’s the demographic we are trying to capture. This product type is different than anything currently built in Lehi.”

“The homes are at the same grade. I’m not sure what mitigation can be done [for the neighbors],” said Albrecht. The developer responded by acknowledging the concern with a willingness to work on mitigating the issue but also noted that the current zone would allow for a potentially taller office building.

The presentation was halted again as Koivisto reiterated her concern for the process. “I just don’t feel comfortable even discussing this right now. I feel like this should have been submitted as an application.”

“Katie, it was on the agenda. This isn’t a non-proper manner,” said Hancock.

“Katie is there any difference when two of us meet with a developer than us doing it this way,” said Councilman Mike Southwick.

Koivisto responded to Southwick saying, “You’re right, I don’t think there is a difference doing that, but I don’t like personally meeting with anyone before council meetings.”

Albrecht then asked for clarification on Koivisto’s earlier comments about meeting with developers. “Katie, out of curiosity, have you met with developers?”

“I have had developers reach out to me, yes,” responded Koivisto.

“Ok, at the meeting we had in the neighborhood just this last week, you said you met with the developers for the project on 2100 [North], did I hear that wrong?” said Albrecht.

“They talk to me and I say I prefer not to have these [interactions]. That doesn’t mean the developers don’t email or reach out to me. They have presented things to me and I say I want to talk to them in person at council meetings,” said Koivisto.

“The comment you made to the neighbors was that you told the developer ‘no way’ on a couple of things. So, there wasn’t a discussion or a conversation that wasn’t held?” questioned Albrecht.

“No, I didn’t say that to the developers. I said in my own personal mind that there is ‘no way’ I could move forward with something like that,” defended Koivisto.

“Then I completely misheard in that meeting that we went to together because I came away thinking you met with the developers and what you told the residents was that you already decided ‘no way’,” said Albrecht, who concluded, “I think ‘no way’ was exactly how it was phrased.”

Councilman Chris Condie then offered comments regarding the discourse on the agenda item.

“I wish we could have continued the conversation, not to try and be sold on it but to give feedback, but I feel like we spent 20 minutes trying to debate whether or not to do that. Seven years on the council and we have done this several times. Being in front of the public and on the agenda, I don’t know how you get more transparent than what we are doing right now. I think if a member of the council isn’t comfortable then I think, hang up for right now and we will tell you when we are back on for item number two,” said Condie.

“Chris, I think that’s disrespectful to say something like that,” said Koivisto.

Condie interrupted, “We can keep going on and arguing about what to do. We are spending 20 some minutes, we could have been done with this.”

“I said, submit an application. That was my final thought,” concluded Koivisto.

Mayor Johnson then interjected to end the debate and offered a closing statement for the developer.

The developer thanked the council for the feedback offered and reassured them that they intend to follow the development process including, “grinding it out with the public.”