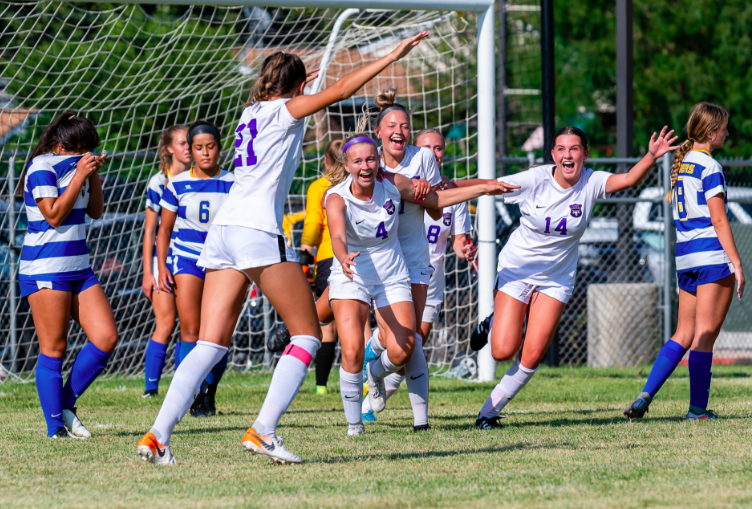 After a heartbreaking overtime loss in their previous game against Pine View, the Pioneers showed resilience by defeating the Timberwolves 3-1 at home on Aug. 18.

Senior forward Kennedi Schmidt put Lehi on the scoreboard six minutes into the game. After receiving a pass from junior midfielder Calista Wren, Schmidt carried the ball down the field 50 yards eluding defenders before beating the keeper from the top of the box with a left-footed shot.

On the next Pioneer scoring play in the 12th minute, Lehi put on a jogo bonito clinic. After winning a goal kick near midfield, the Pioneers linked four quick passes together, culminating in sophomore forward Stephanie Roper running onto a pass from junior midfielder Ally Dahl to beat the charging Timpanogos keeper.

Roper scored again 26 minutes into the second half, putting Lehi up 3-0. After collecting a pass from senior forward Haley Martin on the left sideline, she cut toward the goal, dribbling deep in the box before shooting with her left foot and finding the side netting inside the far post.

The Pioneer defense and goalie Hayley Ogden made numerous stops and saves throughout the game and nearly had their third shutout of the season. Timpanogos scored on a corner kick with 1:24 left in the game.

Lehi Coach Tim Graham was pleased with his team’s performance. “We were able to bounce back from our Pine View loss due to mental preparation and our positive attitude…I really felt that we played our game and won all 4 phases of the match. It was an impressive thing to be a part of.”

Lehi won an overtime thriller at Orem on Aug. 20. The Pioneers maintained possession but were unable to hit the target for most of the game.

The Tigers took advantage of some Lehi defensive breakdowns to score in the 14th minute of the first half and in the third minute of the second half.

“We actually kept the ball throughout most of the game, but we could not finish for the first three-quarters of it,” Graham said. “We gave up two goals on a couple of unfortunate mistakes and just put ourselves in a hole.”

Down 2-0, things were looking bleak for the Pioneers until Ally Dahl scored on a free kick from about 30 yards out with 16:24 left in the match.

With 39 seconds remaining on the clock, Roper ran onto a long diagonal pass from junior defender Savannah Jones to knot the score, sending the match into overtime.

In a demonstration of possession and ball movement, eight Pioneers touched the ball on the play before it found the back of the net.

For the second time in as many weeks, Lehi was involved in an overtime match. This time, the Pioneers prevailed, scoring on a corner kick in the fifth minute of the first extra period.

Ally Dahl sent the corner kick to the far post, where it was headed down and redirected across the face of the goal by Schmidt.

With her back to the net, Jones watched and waited as the ball bounced up from the turf and traveled across her body. She then pivoted on her left foot, turned toward the goal and side-volleyed the ball with her right foot past the Orem keeper for the sudden-death victory.

Graham praised his team for their effort and for having “the heart of a champion” in the come-from-behind win. Jones was named player of the game for her assist to send the match into overtime along with her contest-winning goal.