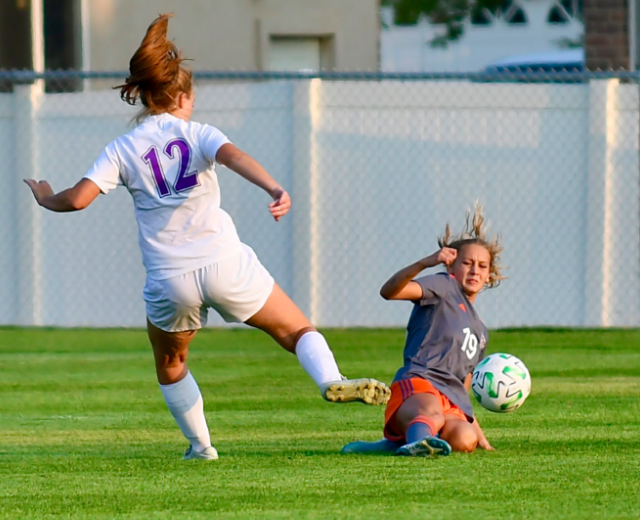 In the final tune-ups before starting Region 4 play, the Skyridge girls soccer team dropped a match to Mountain Crest 2-0 on Aug. 18 but outlasted Riverton in double overtime to win 1-0 on Aug. 20.

“Against the Mustangs, we out-possessed them but we weren’t able to do anything in the final third,” said Coach Jerry Preisendorf. “The girls didn’t have a lot of energy. However, we got a lot out of it to work on in practice.”

The coach added that the players also had a meeting amongst themselves to try to sort out some communication issues. He said they wanted to get on the right track sooner rather than later.

The Falcons battled the talented Silverwolves for 95 minutes before the contest was decided by a golden goal from senior wing Madison Snyder in the second overtime period.

“Riverton is a good team with lots of good individual players,” Preisendorf said. “We got lucky a couple of times when they hit a couple off the crossbars, and our keeper (Haley Ellis) played really well. We had some balls come through on defensive miscues that she was able to corral.”

Skyridge had some near-misses as well, but there was no question about the outcome once Snyder got into position. “She’s just a machine out there,” the coach said. “I’m glad we were able to grind out a win. The soccer wasn’t pretty in overtime, but at that point we’re just looking for a result.”

With dynamic senior Yin Nawahine available to play for the first time, Preisendorf was able to fine-tune his lineup.

“Amanda Caswell keeps impressing me more and more,” he said. “We’ve moved her into the center middle now to allow a little bit quicker play. She’s adapted and is like a little Energizer bunny in there.”

With Nawahine on the field, the coach was also able to move Snyder back to wing forward.

“This is the first game they’ve played together,” Preisendorf said. “We now have speed we can use in combination on the attack. We’re going to need it since we start region play this week.”