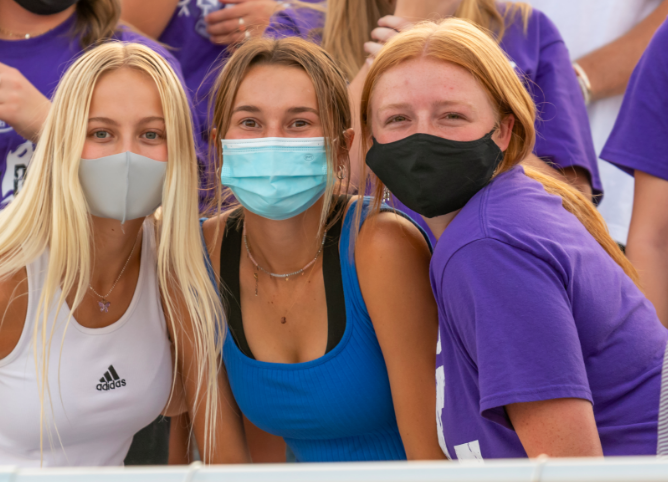 The return of face-to-face education has brought questions about COVID-19 management to the forefront, and although there have been some cases reported, Alpine School District and Utah County Health Department officials are hopeful that cases can be minimized by following established protocols.

As of Monday Aug. 31, ASD is reporting 67 active positive cases in its 91 schools and six general district offices. Forty-one cases involve students and 26 are employees. The figures were reported in a joint news release from the District, the UCHD and the City of Pleasant Grove.

Pleasant Grove High School was identified as a “high impact area” according to the release, which also announced a modification to the instructional schedule there beginning this Thursday.

“Although we aren’t releasing the numbers specifically by school, I can confirm that there is an elevated number of cases behind the change to a modified schedule at that high school,” said David Stephenson, ASD administrator for public relations.

“It is a hybrid schedule where only half of the students will attend per day,” he said. This is the way classes have already been structured in the Provo School District, with students doing work online when they are not in school buildings.

The release indicated that about 76,000 students out of about 81,500 are attending classrooms daily along with more than 8,400 employees.

“For the first couple of weeks, it’s going as well as we can expect it to,” said Kim Lowe, ASD head nurse who reports to the UCHD. “Obviously, we would be very busy as school nurses to try to help all students, faculty and staff to reenter school safely.”

Lowe said all school nurses are also public health nurses for the UCHD. It’s their responsibility to do the notifications and contact tracing recommended by the state health department, with the help of additional department employees if needed.

All school districts in the state are required to follow a 97-page set of guidelines prepared in conjunction with the governor’s COVID-19 recovery plan and the Utah Department of Health. The complete document can be accessed here:

Lowe acknowledged that a lot of different information was released to the public in the weeks preceding the school reopening, but the guidelines in the final document are clear.

In addition, if a single individual tests positive for the virus, anyone within six feet of that person for longer than 15 minutes must be quarantined for 14 days as well.

This last standard has caused consternation among some students and parents. “I understand the frustration,” Stephenson said. “We’re just following what the UCHD has told us to do. It would be the same thing with a case of pertussis or any other infectious disease.

“We’re doing everything we possibly can to keep all of our school programs, whether academic, extracurricular, music or anything else remain in place,” he said. “We have to try to eliminate any community spread in order to make in-school education a viable option.”

Lowe said it would be up to the governor to order the full closure of schools again, but everyone wants to avoid that.

She agreed that not everyone is reacting well when they get the call informing them of a quarantine.

“We know there was so much information put out there and changed so many times that we can understand the frustrations,” she said. “At the same time, we do have to follow guidelines for everyone’s benefit.

“As school nurses we are working extremely hard to keep students, faculty and staff safe in all the schools,” she said. “We realize this is a very volatile time and people may feel angrier than normal. Let’s be kind to each other and communicate well.”

Quarantined students and employees are excluded from participating in all classes and activities even if they have no symptoms or test negative for the virus. This has led to some very public complaints and Stephenson said there have also been some threats directed toward students who do test positive.

“This is very unfortunate,” he said. “No one should be bullied or ostracized by others about something they have no control over.”

So far there has been no need for any wholesale cancellations of athletic or other school events, although there have been some specific instances. Last week’s Provo vs. Timpview football game was cancelled because of positive tests among Provo students and faculty members.

There was also a football game at American Fork last Friday which was delayed by the athletic director when he noticed that some spectators were not following the guidelines they had agreed to.

“Our Athletic Director paused the game between the first and second quarters when it became obvious that spectators were not seated in their assigned sections,” said Chip Koop, assistant principal and athletics supervisor.

“Our AD paused the game so that people could make the shift to their assigned sections for social distancing purposes,” he continued. “Our guests in the Timpview (visitors) sections did a good job of going and staying in their sections from the start of the game.”

Koop added that face coverings weren’t really the problem. “Masks were not a big issue as most kept them on throughout the game,” he said. “The main issue was distancing which necessitated a pause in the action.

“Fortunately, many spectators did comply and made the shift to their assigned sections which allowed the game to resume. Some were not happy about it but when the players all started to encourage fans to get up and move so the game could go on, they complied quicker.”

During Friday night’s game at Lehi High School, the announcer gave repeated reminders to the crowd to follow the guidelines. “Please mask up so we can suit up,” he said.

Rob Cuff, director of the Utah High School Activities Association, said that a few soccer and volleyball games have also been cancelled, but these can generally be rescheduled since the teams play more than one game in a week, as opposed to football.

He added that the RPI seeding system used now for state tournaments can accommodate schedule anomalies that may occur because of random and unanticipated cancellations.

“Whether they play seven or five opponents in a region isn’t as important,” Cuff said. “They don’t have to all play each other, so in a way it’s fortunate that we have this system now.”

Cuff said coaches and administrators in the trenches are making the biggest difference. “Even the governor said there’s not zero risk,” he explained. “In sports there’s always risk, but we can minimize it by how we do our very best to follow the guidelines.

“We can’t get complacent, because things could get out of hand quickly as soon as we let our guard down,” Cuff added. “Everyone has a part to play.”

He also confirmed that as long as a player is a full-time student at the school where he or she is registered, they are permitted to participate regardless of what type of instructional model they are enrolled in.

“How appreciative we are of all of our students, employees and families who are checking symptoms every day,” Stephenson said.  “We’re grateful when they stay home and get checked if they need to get checked.

“It’s going to take all of us working together to keep everyone in school,” he said. “We want students to be able to participate. In order to make it happen, we all need to do everything we can.”

Alpine School District to launch survey on how to manage growth