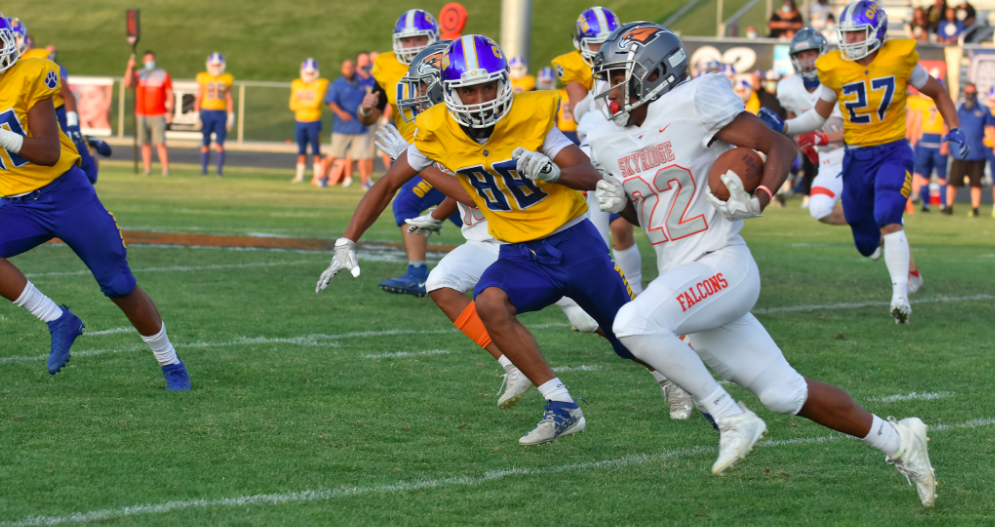 The Skyridge football team remains unbeaten after a 35-14 victory over returning 5A champion Orem in a spirited game on Aug. 28.

The Falcons controlled the game by building a 21-0 lead in the first quarter. They followed up with touchdowns in the second and fourth quarters and held the visitors to a pair of scores to assure the win.

Junior running back Jeter Fenton put the first points on the board with a 3-yard dive into the end zone just two minutes into the game. Sophomore quarterback McCae Hillstead followed up with a rushing touchdown from two yards out at the 6:11 mark.

With 1:54 left in the first quarter, Hillstead found senior wide receiver Mitch Adamson on a post route for a 57-yard strike.

The Falcon offense continued their dominance of the first half when Hillstead connected with junior wide receiver Jack Hadfield on a 72-yard bomb down the sideline with 1:33 left in the second quarter.

The final touchdown for the Falcons was scored with 11:55 remaining by junior wide receiver Connor McAllister on a 20-yard reception, the first varsity touchdown of his career. Senior kicker Braden Buck was 5-for-5 on PATs for the contest.

The Tigers got their touchdowns in the third and fourth quarters.

“It was another good game,” said Coach Jon Lehman. “It was a fast start. We came out quick and the offense executed from their first drive and really established what they did on the field.

“Jack Hadfield played a great game,” he continued. “We really challenged him, he pushed the field vertically and just made some amazing catches. We’re happy with our 3-0 start and are just looking forward.”

Hadfield said, “I feel great about this win. The first half we were executing really well and we were just clicking. We kept the positivity. We had the energy and we were just driving down the field all night.”

McAllister added, “It is unbelievable that this was my third varsity game and I got a touchdown. Our team is solid and this is a really good team. Everyone did their job tonight, no matter what their situation.”

The Falcon defense frustrated the Tiger offense by pressuring the quarterback and consistently deflecting passes before they reached the receivers.

Senior cornerback Coleman Beck was particularly effective against the talented Tiger receivers. He ran stride for stride with them, not allowing for any passing lanes. Senior linebacker Maka Fainga forced a fumble and recovered the ball to stop an Orem drive.

Sophomore cornerback Smith Snowden had an interception and gave a great effort throughout the game. The defense has been consistent all season long even when facing some of the state’s elite offenses.

The energy of the defense was key in exhausting the Tiger offense and keeping the visitors in check throughout the game.

Lehman said, “Defensively, Coleman Beck played an awesome game all night. There were some tough matchups for him and he put his head down and played great football.”

Fainga said, “We stopped Orem’s running game. Our D-line was just eating up all the blocks from their lineman and our linebackers filled the gaps. This was a big win and it feels good. We came out hard and we did it.”

It was a collective victory for the Falcons. Hadfield said, “We are all a team and it’s not one player, it is every player.”

Beck added, “The defense shut Orem out and we brought our all. McCae had some big throws and really put us up. We had some big plays and we stayed hyped as a team.”

Lehi volleyball falls at home, wins on the road