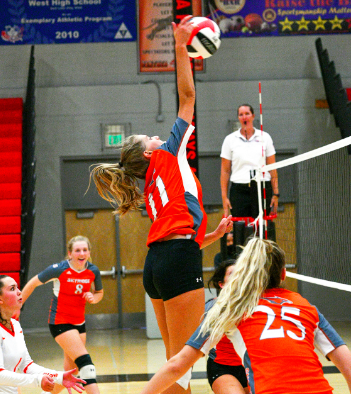 The Skyridge volleyball team battled to 3-2 victories over Timpanogos at home on Aug. 25 and on the road at West on Aug. 27.

The Falcons alternated set wins with the Timberwolves for the first four games in a match that was tight throughout, dropping the first and third but answering in the second and fourth. They were then able to put Timpanogos away 18-25, 25-21, 23-25, 25-19, 15-9.

Junior outside hitter Rose Moore is emerging as a leader for this team, tallying eight kills, eight ace serves, 14 digs and 18 assists in this contest.

Junior setter Emma Meyer made 14 assists and sophomore outside hitter Emma Grant aced seven of her 13 serves to score on an impressive 54 percent of her attempts.

Moore posted another excellent performance with 13 kills, five aces, 11 digs and 22 assists. Rupp chipped in for 10 kills and 11 digs, while Standifird added four aces and 15 digs.

Echevarria had 26 serve-receives to go with 18 digs, and Meyer added 16 digs and 14 assists to the effort.