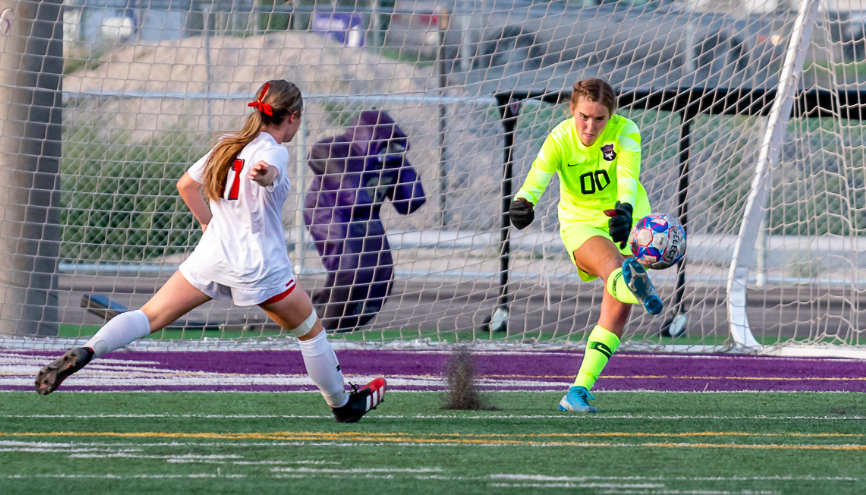 In the only game last week, the Lehi girls soccer team lost a close match at home to Alta 4-3 on Aug. 25.

The Hawks got on the scoreboard first on a corner kick in the 23rd minute of the first half. Four minutes later, a Lehi defender committed a foul in the box and the visitors were awarded and made a penalty kick.

Just when it looked like the match might get out of hand, the Pioneers circled the wagons and scored three unanswered goals in the final 10 minutes of the period.

Senior forward Cortlyn Moyes started Lehi’s scoring frenzy by side-volleying a crossed ball from sophomore forward Stephanie Roper into the back of the net with 10:09 left in the first half.

Only 26 seconds later, the Pioneers scored again when junior midfielder Calista Wren blasted a left-footed shot over the Alta keeper and defenders.

The Alta goalkeeper came out and deflected the ball. Wren redirected it from 14 yards out, putting it just under the crossbar the tie the score at two apiece.

Lehi was not done yet. With only 26 seconds on the clock, senior forward Haley Martin looped the ball over the Alta goalie from 30 yards out to give the Pioneers a 3-2 lead at the half. Martin’s shot hit the underside of the crossbar after clearing the keeper’s outstretched fingers.

The Pioneers were not able to maintain the momentum in the second period, however. Just two minutes in, Alta scored to draw even in the game.

The Hawks put the ball in the net again with about 15 minutes remaining in the match, taking a 4-3 lead that they would not relinquish. Lehi had a few good chances to score during the period but were unable to capitalize.