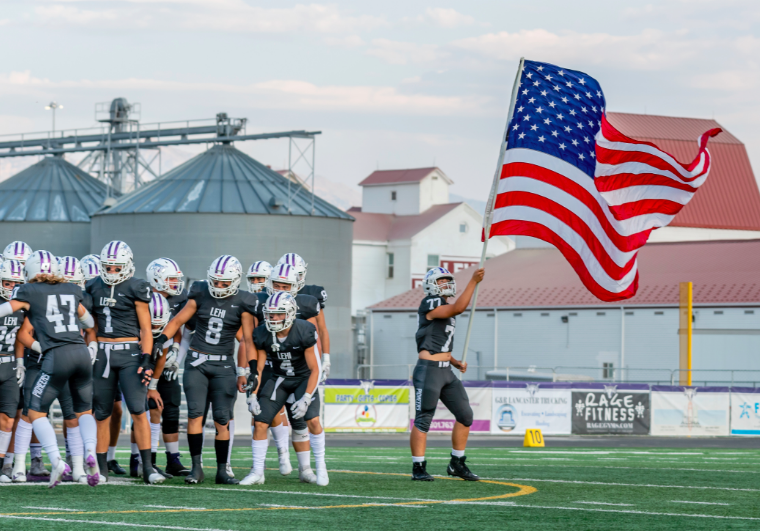 The Lehi football team’s offense made some big strides against Riverton on Aug. 28, allowing the Pioneers to secure a solid 28-18 home victory in front of an enthusiastic COVID-era sellout crowd.

Senior quarterback Creyton Cooper completed 22 of 28 passes (78.6%) for 259 yards and three touchdowns with no interceptions against the Silverwolves. He spread the ball around among six receivers who each had three catches or more in the contest.

“Creyton grew up this week,” said Lehi Coach Ed Larson. “He learned to stay in the pocket to make throws. I thought our first down passing game worked well for us, though we had some offensive penalties we need to clean up.”

The Pioneers won the toss but deferred. They held Riverton to a 3-and-out on the first possession and after a punt return by sophomore Kadiyon Sweat, Lehi was in business with decent field position.

The Pioneers moved steadily down the field with the aid of big receptions by senior Peyton Dieters, junior Isaac Dayley and senior Chandler Jenkins before Cooper connected with Jaxon Christensen for a 15-yard touchdown grab with 4:57 to play in the first quarter. Carson Weber’s PAT made it 7-0.

On Riverton’s next possession, senior defensive back Holden Hughes intercepted the ball during their second series, but the drive sputtered and the Silverwolves went on to score at the 9:48 mark of the second quarter.

The Pioneers didn’t quite reach the end zone on their next possession and a field goal attempt sailed wide right, but Lehi quickly got the ball back when junior linebacker Tristan Royce picked it off and downed it at the Riverton 29.

Dieters took care of it from there, crossing the line at the 4:21 mark to push the score to 14-6 after the PAT. That margin stood through the rest of the half.

The Pioneers got the ball to start the third quarter. On a 3rd and 11 at the Lehi 35, senior tight end Josiah Westover picked up 22 yards to keep the drive going and added another big grab a bit farther upfield.

Senior wide receiver Grady Gonzalez capped the effort with a smooth 14-yard catch in the back corner of the end zone to make it 21-6 with 7:10 to go in the period.

The Silverwolves got a touchdown on the ground with 8:11 left to play but missed the PAT again, leaving the score at 21-12.

Lehi answered on the next drive, keyed by a 27-yard connection from Cooper to Christensen. Dieters hauled in a 44-yard pass to set up completion of the Pioneer tally for the evening. Weber’s PAT made it 28-12 with 5:06 remaining.

Riverton scored one more time with a hurry-up offense but failed to convert a two-point try, effectively putting the game out of reach.

Dieters rushed 12 times for 79 yards and caught four passes for 67 yards with one touchdown each way. Jenkins averaged 13.5 yards on each of his six carries.

“It was the second good outing in a row for Isaac (Dayley) and a breakout game for Josiah (Westover),” Larson said. “We had to use a makeshift offensive line tonight because of health issues not related to COVID but hopefully we’ll get our guys back this week.”

The coach added that senior transfer Takeshi Faupula should be available this week after his paperwork is cleared and senior wide receiver Isaiah Tauai is expected back from a hamstring injury suffered at American Fork.

On the defensive side of the ball, senior linebacker Christian Wren had another monster night with 13 solo and 11 assisted tackles, including two for a loss. Royce added nine solo tackles and two assisted ones with two for a loss to his interception.

“I thought our defense played pretty well,” Larson said. “Riverton exposed our weakness against the run game and that’s something we’ve got to fix. We don’t have a choice if we’re going to have a shot this week.

“Mountain Ridge is the best second-year school I’ve seen in a while,” the coach explained. “They have good size and good speed. I think it’s going to be a battle for us.

“The first year we handled them pretty easily as you would expect but it’s going to be a different story this time around,” he added. “It should be a good tough battle at their place and a good test for us as we get into the meat of our schedule.”