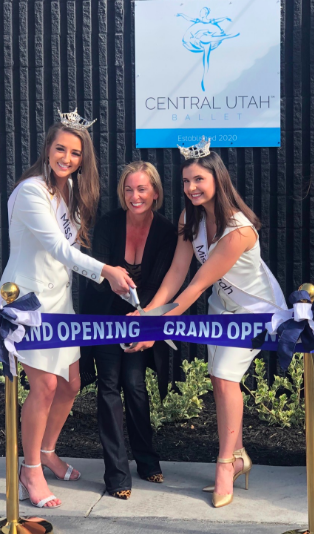 The Central Utah Ballet has opened its first studio in Lehi, 132 S 1350 E, with 125 local students already enrolled in classes.

Jennie Creer-King, owner of Central Utah Ballet, has been teaching dance in the greater Utah area for more than thirty years. Creer-King started her career with the BYU Theatre Ballet and moved on to the University of Utah School of Dance, where she continues to work. She has always wanted to own her own studio where she would have the freedom to let her creativity run. The studio’s focus is on classical ballet with a contemporary twist. Creer-King’s goal is to place students who train with her in university programs where they can then work to join a professional company.

The Central Utah Ballet Studio is located in what was previously a warehouse with garage doors. Creer-King has worked tirelessly to remodel the space into a state-of-the-art facility. Mark Welcker, CEO of the Point of the Mountain Chamber of Commerce, gave a few remarks at the ribbon-cutting ceremony on Saturday morning, August 29, commenting on the growth Lehi has seen in recent years and what is to come. “It won’t be long before the population of Utah County reaches that of Salt Lake County,” said Welcker. He also gave his congratulations from Mayor Johnson who was in Alaska at the time of the ceremony.

Miss Utah 2019 Dexonna Talbot and Miss Lehi 2020 Lindsey Larsen, current students at the University of Utah School of Dance, were both present at the ribbon-cutting to support their teacher. “Jenny helped make me the woman and dancer I am today,” said Talbert. Lindsey Larsen said, “Jenny is like a second mom to me, she is absolutely amazing.”

The Central Utah Ballet Studio officially opened its doors on Wednesday, September 2, and offers classes for ages three to 18 years old with an adult class as well. The studio is also offering the entire month of September free of tuition for all new students.