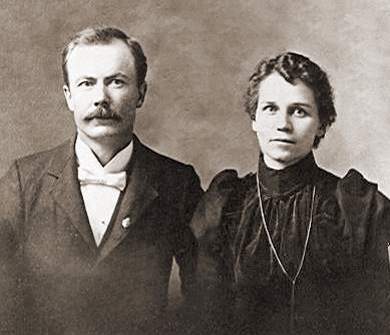 After living through six months of quarantine, I have been reflecting on the experiences of my ancestors, who were infected with influenza during the 1918 Spanish Flu Pandemic. My grandfather, Morris Holmstead (age 12), along with his parents (Olaf and Katie, ages 48 and 41), and four of his five siblings (Victor 17, Cleo 9, Merlin 6, and Eldon 3) all contracted the flu.

The oldest sister, Ora (age 19), was the only one in the family who didn’t come down with the deadly flu virus. Ora was charged with nursing her parents and five siblings with around-the-clock care, for weeks.

Ora made mustard plasters for their chests because the virus invaded their lungs and caused pneumonia. She also administered medication every few hours that the doctor left for them, which helped ease the pain. She took care of all the physical needs of her extremely sick family. It was a cold Utah winter, with three feet of snow on the ground, which meant that in addition to taking care of her patients, she had to keep a fire burning to heat the old adobe house.

The Lehi town doctor, Dr. Fred Worlton, was wonderful, and he came around every day, without being called, to every home that was stricken with the flu. One morning, he scolded Ora for not wearing her mask and told her that she and her brother, Merlin (age 6), who hadn’t yet contracted the virus, would be down with it the next day because she wasn’t wearing her mask regularly. Ora felt there was not enough time to put her mask up and down with all the tasks she had to do. But she took the doctor’s words to heart and wore her mask faithfully. She and Merlin gathered extra and coal to prepare for the likelihood of coming down with the flu themselves. Merlin did catch the virus, but Ora never did. She was, however, understandably exhausted.

Those were hard days and nights. She found out later that Dr. Worlton had given her father, Olaf, just a couple more days to live. They later discovered that his bed was next to a broken window and the cold air flooded over him, worsening the pneumonia.

One day, a teacher from the local New West School came by with her mother to see how they were all doing. Seeing how exhausted Ora was, the teacher volunteered to take care of the family during the night, so that the poor 19-year old could get some sleep. The teacher, Miss Nympha Whalley, did this for two weeks until the worst was over. She made compresses out of wagon grease and turpentine to put on Olaf, a trick she had learned in Africa. Ora thought that this was perhaps what saved Olaf’s life.

Miss Whalley’s mother went over to nurse the family of Olaf’s brother, Oscar, who were also all down with the flu, as were many other members of the large Holmstead family.

The family was lucky, though, because people all around them were dying every day. Every pregnant woman in Lehi who got the flu, died that year.

The Spanish Flu (H1N1 virus, with genes of avian origin) of 1918-1919, infected an estimated 500 million people worldwide (about one-third of the planet’s population at the time) and killed 20-50 million victims. More than 25 percent of the U.S. population became sick, and some 675,000 Americans died during that pandemic. In the U.S., citizens were ordered to wear masks, and schools, theaters, and other public places were shuttered.

The Spanish Flu was the deadliest in modern history, claiming its first 25 million victims within the first 25 weeks (5½ months). Why has this disease been so overlooked in history? No one knows. Perhaps it’s because of the horror it caused to cities and the efficiency with which it killed. When undertakers ran out of coffins, bodies lined the streets.

One of the things that made the illness so deadly was that it killed more healthy young adults than it did children or the elderly. In some especially deadly cases, the person afflicted with the disease died only hours after feeling the first symptoms.

I wrote about my family’s experiences in my grandfather’s history, so I had previously researched the flu pandemic, to add to the chronicling of the event found in family journals.

With all this history on my mind, it has caused me some reflection about our own 2020 Corona Virus Pandemic.  Each time I think that maybe we’re going a little overboard with restrictions, I think about how those very same early restrictions have most likely saved the lives of hundreds of thousands of people. I know it’s easy to become complacent when we aren’t personally acquainted with any victims, we get antsy from being confined for six months, and some even feel that their rights are being taken away by being required to wear masks in public. Some are convinced the virus is a hoax.

But when I listen to the stories of people who have contracted the Corona Virus, it becomes real for me once more. For me, it is no longer about giving up some personal freedom of movement, wearing a mask in public, keeping social distancing, etc., it’s about containing a deadly virus. The difference with the Corona Virus is that it’s not the healthy young adults that are being targeted; it’s the elderly and young children – just the opposite of the Spanish Flu.

Many of my ancestors’ families were infected with the Spanish Flu, and I almost lost my great-grandfather because of it. I am very grateful for the untiring efforts of the local doctor who made the daily rounds in Lehi, visiting all those who had contracted the flu; a great-grand-aunt who was the superintendent of the St. Mark’s Hospital Maternity Ward in Salt Lake City, who came home to Lehi to help out with her large extended family; a local teacher who took on the burden of nursing my family at night for a few weeks; and mostly to my great-aunt, Ora Holmstead, who selflessly nursed seven very sick family members day-and-night, for many weeks.

Some parallels can be drawn with today’s virus. Selfless medical and emergency workers are taking shifts around the clock to care for the victims of the virus. Essential service employees are working hard to keep our stores and other vital services open and functioning during the crisis. They deserve our gratitude and assurance that we will be on our best behavior to help them defeat this deadly pandemic.

It is time for those who have used this time to “act out” and cause more distress and violence to an already over-stressed world, to take a serious “time out”. We have had enough of the childish temper tantrums that only serve to draw the attention away from those who need it most.

It is time for people to follow medical precautions to keep the virus from spreading, whether or not they feel that they are necessary. It is time to step outside of our personal feelings and consider the needs of our communities. It is time to follow these precautions as a matter of simple respect for human life.

It is time to lend our love and positive help to the situation and be part of the solution. It is time to find a way to conquer this pandemic and ensure the health and safety of all of our citizens.