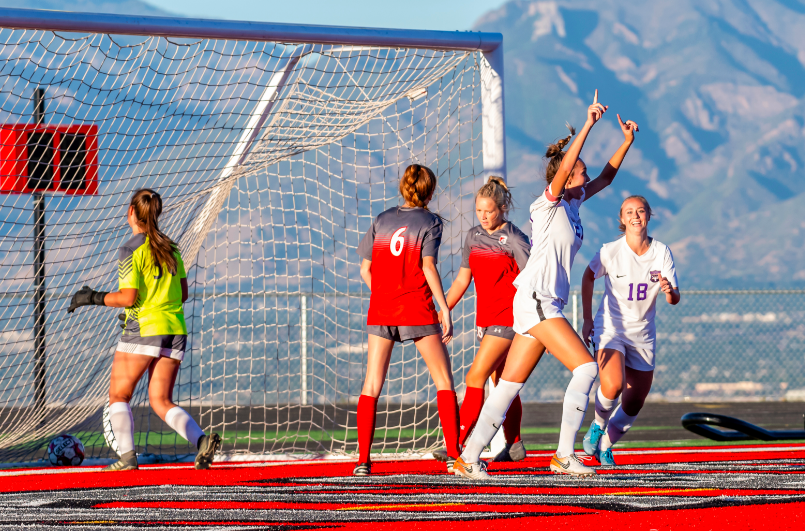 Lehi dominated possession at Timpview for the first portion of the game. The Pioneers had quality chances to score but were unable to do so in the first half.

In the 20th minute, the Thunderbirds were awarded a penalty kick. Lehi’s sophomore goalkeeper Hayley Ogden went low to her left to stop the ball just outside the post.

Ogden has only allowed one goal on four penalty kicks this season and is averaging 3.5 saves per game. “Her ability to read an attacker and take away angles is a very special gift. We are lucky to have her tending our goal,” said Pioneer Coach Tim Graham.

Junior midfielder Ally Dahl put Lehi on the scoreboard in the 21st minute of the second period. On a set piece, Dahl placed a precision shot between the Timpview keeper’s outstretched fingers and the bottom of the crossbar to give the Pioneers a 1-0 advantage.

The Lehi defense was able to withstand the Timpview attack for the final 19 minutes of the match to achieve their third shutout of the season. “The defense was very stout, organized and physical against Timpview. They came up huge,” Graham said.

Lehi traveled to Mountain Ridge on Sep. 3 to take on the Sentinels. The Pioneers controlled possession in this game from start to finish.

Lehi scored early in this match when senior forward Kennedi Schmidt side-volleyed a crossed ball from sophomore forward Stephanie Roper into the back of the net in the fourth minute.

Mountain Ridge tied the game with 11 minutes remaining in the first half.

In the 10th minute of the second period, Roper put the Pioneers up 2-1 when she scored on a right-footed blast from 14 yards out.

With 13:33 remaining in the match, Ally Dahl scored on a set piece for the second game in a row to push the Pioneers ahead 3-1.

“Ally’s accuracy on set pieces is huge for us,” Graham said. “It allows us to be dangerous and have a chance to score every time she sets the ball. She has been remarkable for us this year.”

Lehi is now halfway through the season. At 4-1 in league play, the Pioneers are tied for first place with Alta in region 7.

“Moving forward we just need to keep a good attitude and control the controllables,” Graham said. “This will help as we get ready for the second half of region play and help prep us for the playoffs.

“I have been pleasantly surprised by the resolve of this team. Nothing seems to bother them, which has been awesome considering we are playing high school soccer in a really odd and uncertain time,” Graham concluded.