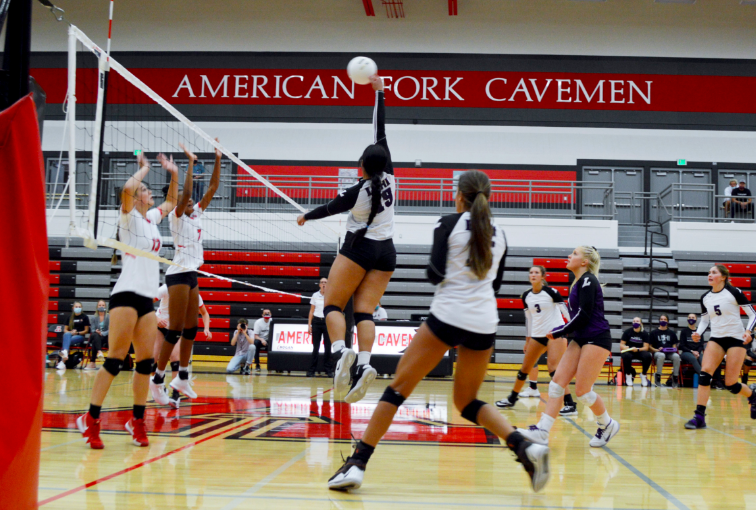 The Lehi High School volleyball team suffered a tough loss to traditional rival American Fork 3-0 on Sep. 1 but bounced back with a decisive win in their first region game against Alta 3-0 on Sep. 3.

The Pioneers met the Cavemen on their home court and couldn’t match their rival’s intense pace for the first set, losing 14-25.

Lehi started the third set with a 4-0 run, followed by a volley that went on for so long that the crowd and the players were laser-focused on the exchanges.

When the ball finally hit the ground and the hard-fought point was awarded to the visitors, the gym still erupted in cheers. Lehi fell just short in the final game 23-25.

Shewell was held to just 14 kills, but also had 12 digs and 29 serve-receptions against the Cavemen.

“Well, you have good days, okay days, and bad days. Tuesday was a bad day for us,” said Lehi Coach Kolton Rader.

“As a group, we were focused too much on things outside our control and that resulted in us playing frantic and playing not to lose rather than being loose and playing to win,” he said.

Rader hoped the team could reset and come out strong against Alta in their first Region 7 game of the season two days later, and they did just that. The Pioneers left no doubt, dominating the Hawks in three sets 25-16, 25-9, 25-19.

Haylee Holker moved from her post at outside hitter to a new position for the Alta game. “I moved Haylee to libero, and she played that new role great,” Rader said.

“She has been our best passer, so I wanted her on the court to pass, but I also wanted to have Ajah Rajvong play outside,” he explained.

Shewell had 10 kills, junior opposite hitter Millie Gibson had seven, and junior outside hitter Ajah Rajvong had three.

Senior setter Macey Faddis helped the Pioneers win with 14 assists and Paia Kaohelaulii added 11. Rajvong led the team in serve-receptions with 13, followed by Holker and Shewell with 10 each.

“I’m very proud of the way our team responded after the loss to American Fork,” Rader said. “We’re so excited to get to work this next week and get ready for the Rocky Mountain Champions Classic.”