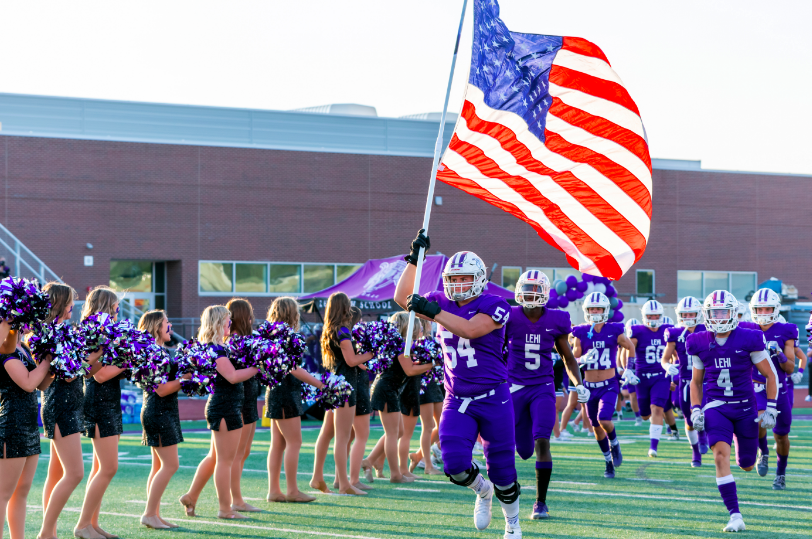 In a Homecoming game featuring wild momentum swings, the Lehi football team jumped out early, fell behind by two scores, roared back to retake the lead but ultimately suffered a tough overtime loss to Pleasant Grove 35-29 on Sep. 11.

The teams traded fruitless series on their initial possessions, but the Pioneers put a solid drive together the second time they got the ball.

On 3rd and 3 at the Pleasant Grove 36-yard line, Lehi ran a reverse and senior wide receiver Isaiah Tauai picked up 14 yards. However, the push stalled after a penalty and the Pioneers settled for a 41-yard field goal from senior kicker Carson Weber to take a 3-0 lead with 4:30 left in the first quarter.

The first highlight-reel effort of the night came early in the second period, when Lehi sophomore defensive end Isaac Terrell blocked a punt.

Senior defensive back Izak Harward scooped up the ball and sprinted 35 yards for a touchdown. The PAT was missed so the Pioneer lead stood at 9-0 at the 10:17 mark.

The Vikings responded with three rushing touchdowns before the break and enjoyed a 21-9 advantage heading to the locker room.

Neither team could gain much traction to start the third quarter. Receiving a punt on its second possession, Lehi got one of several big returns from sophomore Kadiyon Sweat, although some of his gain was wiped out by a penalty.

A 17-yard completion from senior quarterback Creyton Cooper to junior wide receiver Isaac Dayley more than covered that distance, and two plays later, senior running back Chandler Jenkins rumbled across the line to cut the deficit to five points with 4:53 remaining in the period.

The defense played hard all night, and the Pioneers stifled Pleasant Grove’s offense on the next drive, getting another short field to work with at the 44-yard line after the punt.

Senior running back Takeshi Faupula bulled forward for five yards on first down, and then Lehi dipped into the bag of tricks. The Pioneers ran a reverse, and Tauai heaved a halfback pass to Dayley for a 39-yard score.

An attempt at a 2-point conversion didn’t work, but Lehi still had the lead again at 22-21 with 2:28 to go until the final quarter. The teams battled back and forth for the next seven minutes.

Continued stiff defense helped the Pioneers to get good field position again at the Viking 40. The drive was keyed by a 15-yard catch by Dayley on the turf and a shifty 20-yard run by Cooper before Tauai gathered in a low throw in the end zone with 2:54 to play for a 29-21 lead.

Lehi was on the verge of upsetting heavily-favored Pleasant Grove, but then the unthinkable happened. On a 2nd and 17, a Viking receiver managed to elude and then outrun the defenders for a 40-yard touchdown with 27 seconds left. A 2-point conversion tied the score at 29 and forced overtime.

The Pioneers lost the coin toss and their possession ended in an interception. The Vikings then chewed up yards on the ground on the way to paydirt and the victory.

“We told the kids after the game that as coaches, this loss was on us,” said Coach Ed Larson. “There were certain things we didn’t cover with the kids ahead of time, the kind of details of the game that can cost you.

“I thought there were times we were as physical as we wanted to be, but we need to be more consistent in that aspect to play the better teams,” he continued.

“We gave up a long 80-yard drive right before half for a touchdown, and then repeated that at the end of the game. If we could have made a play at any point in that process, it could have made a difference in the outcome.”

Larson noted that the offense had too many 3-and-outs in the first half. “We started executing better in the second half but we still have to put a complete game together,” he said.

One notable absence during this contest was senior cornerback Holden Hughes, who suffered a season-ending injury late in the game at Mountain Ridge.

“Football is about players making plays but you also have to have a lot of luck and make sure you stay healthy,” the coach said.

“We don’t have a lot of depth at many positions, so we’ve been emphasizing to the kids how important the weight room is as well as their diet and rest. And of course, the whole virus thing makes following all those safeguards even more critical,” he concluded.

The linebackers had a busy night against a good Viking offense. Senior Christian Wren and junior Tristan Royce had 22 and 14 combined tackles, respectively. At defensive end, Terrell and freshman Grayson Brousseau each had four solo and four assisted tackles, including two for losses.