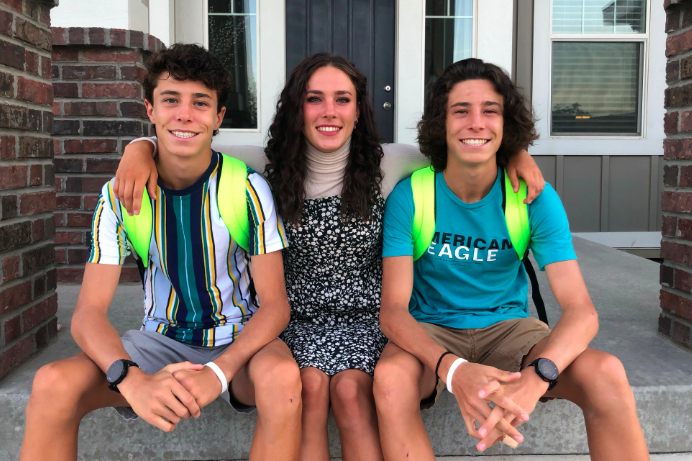 When Creed Thompson won the Wasatch Cross Country Invitational nearly two weeks ago, he raised his forefinger heaven ward. He was not indicating he was first; he was paying homage to his father, Bryce Thompson. His father passed away when Creed, his identical brother, Davin, and sister, Sage, were only 11 years old. This tragic event was a turning point for the Thompson triplets and their older brother, Kade.

The Thompson family had been beleaguered with cancer, finding they had a rare genetic disposition to cancer. An uncle, Ric Thompson, and two cousins, Ric’s children, also died of cancer at young age. Jenni Thompson explained, “the triplets were born through a process called pre-genetic diagnosis invitro, in order to prevent passing on the genetic mutation that Bryce carried that would’ve given them a 50% chance of getting cancer before the age of 30 and a 99% chance before the age of 50.”

The family also had another thing in common, a love and drive to excel in athletics.

Wrestling is a Thompson family tradition. Kade loved wrestling and when he only 12 years old, won the national title in Greco wrestling. He went on to win state titles twice. Creed and Davin both were involved in soccer and wrestling as youngsters, but in the ninth grade decided to try cross country running. They loved running and felt a kinship with the nearly 115 runners at Skyridge High School. In Creed’s junior year he won the Utah state title. He and Davin are ranked in the top ten cross country runners in the nation.

Sister, Sage, is one of the top gymnasts in the state having won numerous state championships. At 16, she won the national championship on the uneven bars. She has committed to continue her gymnastics career at the University of Utah.

When asked, what drives your children to succeed to such a phenomenal degree, mother, Jenni said, “My children have learned that life is precious, and you have to seize the moment.”

Four years after the death of their father, Jenni was diagnosed with breast cancer. While her children were competing, she underwent a double mastectomy and endured chemotherapy. She is now in remission. “Adversity is a good teacher,” she said. “We are here to learn lessons.”

When asked if the boys felt competitive with each other, she said, “The boys have very different personalities. Creed is the ringleader in training. He is quiet and dedicated. Davin is more outgoing and kind of goofy. They are each other’s greatest supporters,” said Jenni.

Thompson lavished praise on the Skyridge cross country coaches. “Jamie Alviso is a dream. She coaches with kindness. All the coaches, Hansen, Gill, and Peterson are exceptionally positive in their approach to coaching,” Jenni said.

“The kids have two hard workouts per week. They run from Dry Creek Park to the school. It is an uphill sprint. It is a timed run. We are very proud of these kids. They are currently ranked 7th in the nation. The girl’s JV team is ranked first in the state and the varsity is ranked second. The boys’ varsity and JV teams are both ranked first,” Hansen said.

The Skyridge Cross Country team was Academic State Champions last year with a combined GPA of 3.96. The Thompson boys each have a 4.0 GPA. “I never have to ask them to do their homework, added Mom.

Jenni has since remarried to Chris Odom. Together they have nine children. “It was really a dream blending of families. We all get along well and root for each other.”

One can’t help but be inspired by the Thompson story. It illustrates the resilience, love, and commitment of a loving family and the power of just plain grit in the competitive world of sports.