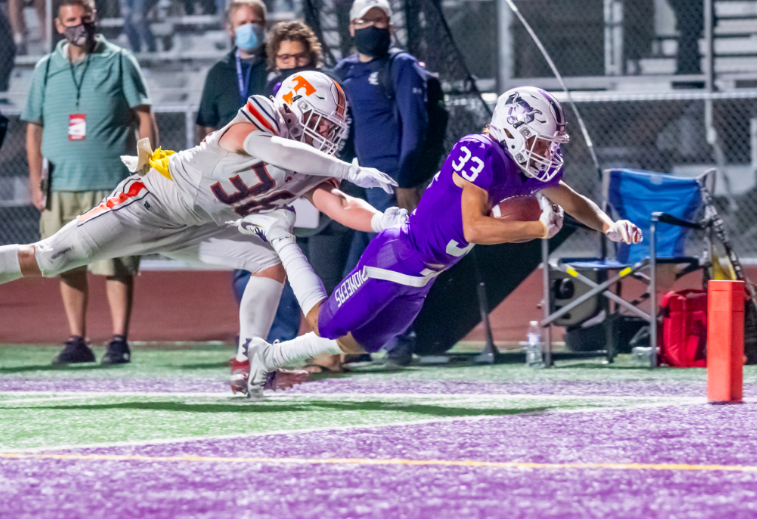 After spotting Region 7 powerhouse Timpview 28 unanswered points in the first three quarters, the Lehi football team found the end zone twice in the final period but ran out of time to climb out of the hole they were in and the Thunderbirds closed out the 28-14 victory in Lehi on Sep. 25.

Penalties hurt both teams at critical moments. One negated a 30-yard pickup during the first Pioneer possession to open the game and eventually contributed to an interception with a long runback that set up Timpview at the Lehi 17.

Three plays later, the Thunderbirds scored to take a 7-0 lead at the 9:38 mark of the first quarter.

Lehi was unable to complete a first down on the next series and punted the ball away. Timpview marched right down the field again and added another touchdown with 3:03 left in the period to make it 14-0.

Senior defensive lineman Alex Long was injured during this drive and didn’t return to the game, the first of several players forced to leave the field during this contest.

Neither team could find any offensive rhythm during the second quarter and they kept trading the ball back and forth after ineffective drives.

Timpview got the ball to start the second half and the Thunderbirds moved efficiently during this drive to score once more and lengthen the lead to 21-0 at the 6:57 mark.

After yet another 3-and-out, Timpview reached the end zone for a fourth touchdown with 1:27 left in the third quarter to make it 28-0.

The Pioneers finally started moving the ball in the fourth stanza. Sophomore kick returner Kadiyon Sweat got a drive started with a nice return.

Solid rushing by senior running back Takeshi Faupula complimented by a couple of nice throws from senior quarterback Creyton Cooper to junior wide receiver Isaac Dayley and senior wide receiver Grady Gonzalez got them within striking distance with the aid of another penalty on the Thunderbirds.

Faupula bulled his way to the target from there. Senior Carson Weber’s PAT made it 28-7 with 10:05 to play.

The ball traded hands a few more times before Lehi got another drive going which ended in a 15-yard touchdown catch by sophomore Carson Gonzalez to make it 28-14 after the Weber PAT with 3:18 remaining.

The Pioneers made a successful onside kick recovered by senior linebacker Christian Wren but they weren’t able to do anything with the ball and time eventually ran out.

“Kesh Faupula had a good game receiving as well as rushing and he had a rushing touchdown,” said Dan Rice, varsity running back coach and special teams coordinator.

“Timpview’s D-line put a lot of pressure on Creyton but he was able to scramble and get a few first downs,” he continued.

“On defense, Spencer Fetuao and Tuaikaepauiminerva Reed had a good game on the front defensive line,” Rice said. “The game was a rough one to lose. If we could put a full game together, we could be amazing,” he concluded.