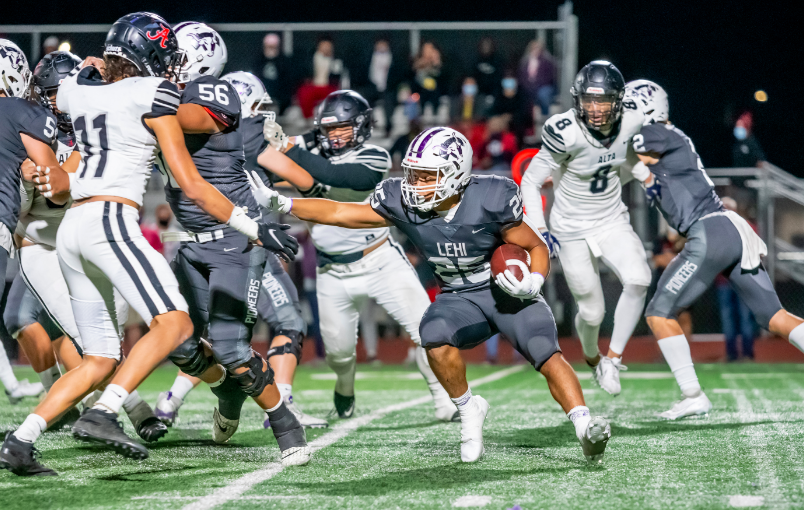 The Lehi football team fought through a back-and-forth contest with state No. 20 Alta but scored with under a minute to go and then held the Hawks on their final possession to earn a hard-fought 24-21 victory at home on Oct. 2.

The teams spent most of the first quarter feeling each other out.

Late in the period, the Hawks had to punt from deep in their own end. Sophomore defensive end Isaac Terrell blocked the kick and the ball bounced a few times before it was picked up by freshman defensive end Grayson Brousseau and returned seven yards for a touchdown.

The Carson Weber PAT gave the Pioneers a 7-0 lead. He added a 36-yard field goal in the second quarter to stretch the advantage to 10-0.

The defense did an admirable job containing the Alta offense until they broke through for a 97-yard pass play with a minute left to narrow the lead to 10-7 at the break.

Lehi received the ball to start the third quarter but was unable to get very far and punted it away. The Hawks responded with a touchdown drive to take a 14-10 lead halfway through the period.

It didn’t take the Pioneers long to respond. On their next series, senior running back Takeshi Faupula broke through the line and outran the defense for a 75-yard touchdown. Weber’s PAT gave Lehi the 17-14 lead.

With the clock winding down in the third quarter, the Lehi defense held Alta on a fourth-down try and got the ball back on their own 26-yard line, but the Hawks soon intercepted it and returned it to the 2-yard line, eventually punching it across to retake the lead 21-17.

A tense fourth quarter followed. The Pioneers marched down the field on their next possession and reached the red zone but came away without any points when a field goal try was blocked.

The Lehi defense once again rose to the occasion and stymied the subsequent Alta drive, giving the Pioneers back the ball on their own 29 with about six minutes remaining.

This time, Lehi chewed up the clock while moving steadily down the field and quarterback Creyton Cooper scored from the 1-yard line with less than a minute on the clock.

The Hawks had enough time for a hurry-up drive but the Pioneers held them on a fourth down attempt and then simply took a knee to end the game.

“At this level in high school football, you’re just happy with the win,” said Lehi Coach Ed Larson. “We had two opportunities inside the 5 we didn’t take advantage of and obviously that was disappointing.

“The defense played very well except for giving up that one huge play,” he continued. “Our kicker, Carson Weber, made a huge difference in keeping their field position back by kicking it out of the end zone.

“I think overall, the resilience of the kids to keep battling for four quarters was what made the difference in the game,” Larson said. “When you are fighting a very good team and can get a win, it gives you a sense of confidence when you’re trying to get into the playoffs and see what happens from there.”

Faupula rushed 12 times for 153 yards and also had four catches for 16 yards. Seven receivers were used during the contest.

The Pioneers have a bye this week before finishing the regular season at Orem on Oct. 14.