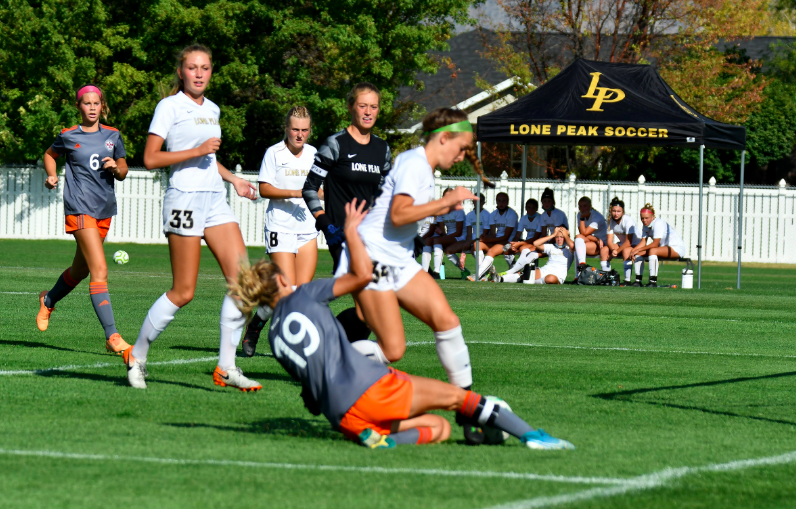 The Skyridge girls soccer team lost a pair of Region 4 matches to tough opponents last week. The Falcons played a competitive game at Corner Canyon but the Chargers won 2-1 on Sep. 22. Skyridge hosted Lone Peak on Sep. 24 and the Knights earned a 4-1 victory.

“For Skyridge soccer, this was a demanding week taking on two of the top-10 teams in the state as well as in the region,” said Coach Jerry Preisendorf.

Corner Canyon scored two goals in the first half of the Tuesday game to put the Falcons in a challenging position. Freshman Amanda Caswell fed sophomore Kylie Olsen for a score that cut the Charger advantage in half during the second period, but Skyridge couldn’t find the net again.

“We were able to muster a little bit of offense and better defense versus Corner Canyon in the second half but still came up short,” the coach said. He added that Caswell and senior Maddie Snyder stood out for the visitors in this match.

That necessary effort proved costly in the next contest. “Against Lone Peak we came out flat and never were able to get into our groove,” Preisendorf said. “We gave up a couple of cheap goals and then we were in a hole and we weren’t able to find our offense.”

The Knights put three goals on the board in the initial period. Freshman Emma Hughes provided the only score for the Falcons in the second half, but Lone Peak scored again to match it and the deficit proved to be too big to overcome.

“Maddie Snyder again stood out as giving her all,” the coach said. “She has been one of our most reliable players all season.”

The team still has plenty to play for with RPI rankings at stake. “We hope for a better end to the regular season this next week versus Pleasant Grove and Westlake,” Preisendorf concluded.