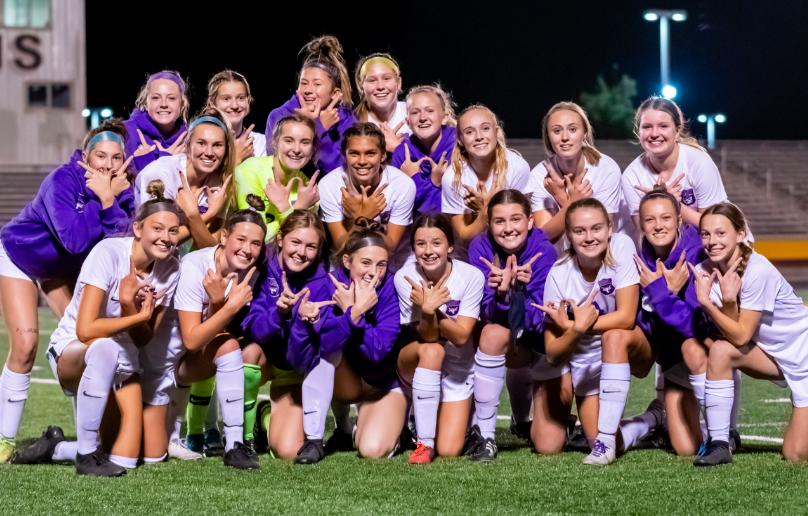 For the first time since 2010, the Lehi girls soccer team is the region champion.

The Pioneers concluded their dominant run in Region 7 by defeating Mountain View 3-2 in overtime on the road Thursday night, Oct. 2, after another victory earlier in the week.

With the win, the 10-2 Pioneers edged out 8-3 Alta for the region title. The Hawks will play their final region game on Oct. 3.

“Our last region championship was a decade ago,” said Coach Tim Graham. “This means everything. When we took the program over, we knew this group of girls had it in them.

“These seniors have dealt with some bumps along the way, but this year they have led from the beginning. Tonight, they played like champions,” he added.

Lehi started fast when senior forward Kennedi Schmidt put the Pioneers on the scoreboard in the 2nd minute of the match. Schmidt jumped high to head a corner kick from junior midfielder Ally Dahl into the back of the net.

The game was played with no spectators since Orem has been returned to the orange restriction level, which prohibits gatherings of more than 20 people.

Anyone streaming the game at home who thought that Lehi was going to have an easy win against the 6-5 Bruins after scoring so quickly was wrong.

Mountain View played great soccer and gave the Pioneers all they could handle – and more. The Bruins tied the game with two minutes remaining in the first half and scored again in the 48th minute to take a 2-1 lead.

Freshman midfielder Erin Dahl played the ball into the box and the Bruin defense was unable to clear it before Ballard ran onto it, beating the keeper from 10 yards out with a left-footed shot placed just inside the post.

Both teams played hard during the remainder of the half. With the score still tied 2-2 at the end of regulation, the game went into sudden-death overtime.

The possession was fairly equal during the extra period. However, things changed when the Pioneers were awarded a throw-in inside their attacking third.

“We made a quick substitution to get Melody Jensen in for a flip throw because she is so dangerous on those,” Graham said. “The ball bounced off a player and Ally Dahl made a hustle play to cross it in from the corner and Kennedi Schmidt volleyed it into the goal.”

That score secured the victory and the region championship for the Pioneers.

On Sep. 29, Lehi defeated Mountain Ridge 3-2 in a home game on Senior Night.

Things looked bleak for the Pioneers after the Sentinels scored twice in the first eight minutes of the match. However, after giving up the two early goals, the Pioneer defense was solid for the remainder of the game.

The Lehi offense fought back with goals from sophomore forward Stephanie Roper in the 15th minute and senior forward Haley Martin in the 44th minute.

Freshman Erin Dahl contributed what proved to be the winning goal in the 58th minute and the squad held on to secure the win.

The Pioneers will find out their opponent for the first round of the state playoffs after the brackets are revealed on Oct. 3. With the Pioneers at 12-4 overall, they will play at home for the first-round game on Oct. 8.