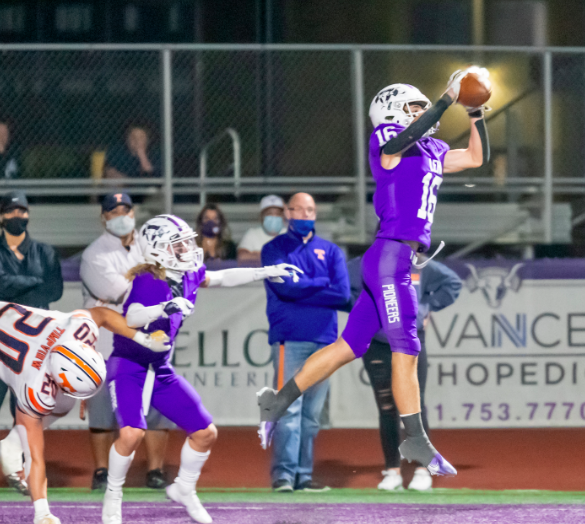 The Lehi football team didn’t capitalize on some significant opportunities and made uncharacteristic mistakes playing at No. 2 Orem on Oct. 14 and fell to the Tigers 31-28.

Orem got the ball first and ground its way down the field, taking two-thirds of the first quarter to reach the red zone and score on a short run to take a 7-0 lead.

The Pioneers answered on their first possession, taking far less time to move efficiently to the target in a drive capped by a 2-yard run from senior running back Takeshi Faupula. The PAT by senior Carson Weber tied the score at 7-7 with 1:21 left in the period.

It appeared that Lehi had grabbed the momentum when senior linebacker Christian Wren intercepted the ball and set the Pioneers up nicely at their own 43. However, they didn’t get anywhere and ended up having to punt the ball right back.

In the final two minutes of the half, Lehi gave the ball up twice with a fumble and an interception and the Tigers made them pay to build a 17-7 advantage at the break.

Once again, the Pioneers were able to respond with a quick drive to narrow the gap to three points after

senior quarterback Creyton Cooper took the ball across from 9 yards out at the 8:55 mark of the third quarter.

Lehi’s defense held on the next Orem possession and the Pioneers got the ball back in short order, but what followed was the first of two missed field goals in the second half.

They were on the march again when sophomore defensive back Kadiyon Sweat picked off an Orem pass and returned it 61 yards to draw Lehi within three points again after the PAT at 21-24 with 1:59 still to go in the quarter.

The Pioneers could have tied the score with a field goal six minutes later, but this one was missed too and the Tigers subsequently launched another long scoring drive to again widen the lead to two scores at 31-21 with 2:07 left on the clock.

Lehi was able to put more points on the board in just 1:20 as Cooper found junior wide receiver Jaxon Christensen for a 31-yard touchdown, but there was only 47 seconds remaining and the Pioneers didn’t get another chance.

“Orem is a very talented team,” said Coach Ed Larson. “They have good size to them and they made fewer mistakes than we did. That’s what this one really came down to. Several players would have had an awful end to their senior seasons if this was our last game.”

The coach liked how his team responded after the Tigers took so much time off the clock with their first long drive, but there wasn’t enough of that resilience as the game went on.

Citing the snap when the ball went over the holder’s head and some easy reads the quarterback missed in the red zone, Larson said, “These were uncharacteristic mistakes for us. We had the game in our hands and let it get away from us. We’ve got to fix that if we’re going to go very far in the playoffs.”

“I felt like we had the toughest schedule by playing three 6A teams but we should have had a better record,” the coach said. “All things considered, we got a decent draw.

“The thing our kids have to figure out is that everyone is going to step up their play now,” he went on. “They have to understand that Viewmont will do better than what we’re going to see on film. We’re going to have to match that with our own play and physicality.”

Although the Vikings have had a down year in comparison to some past seasons, Larson said they still can’t be overlooked.

“They’ve got good coaching staff and they will put their players in the best position to negate what we do,” the coach said. “They have a big physical kid as a quarterback who can throw it around and the defense knows what they want to run and how to keep the ball in front of them.

“They’re still a pretty good team,” he added. “We just need to clean up our stuff to get there. If we can do that, whatever the score turns out to be we feel we’ll have a good jumping-off point for the rest of the playoffs.”