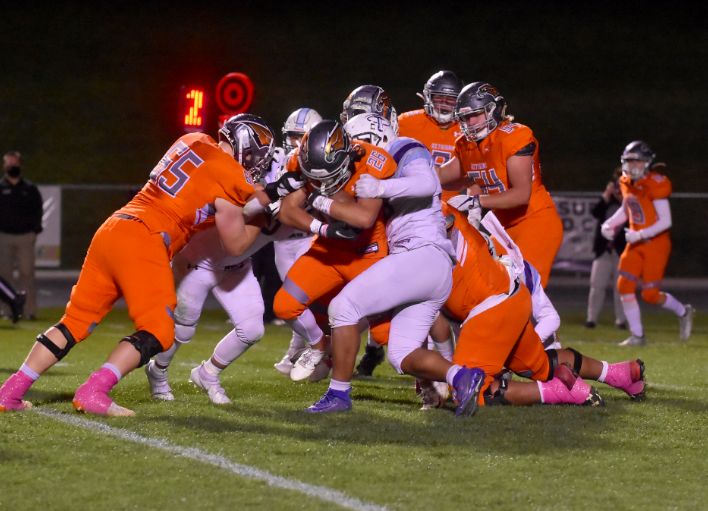 After a slow start for the Falcons, sophomore quarterback McCae Hillstead rushed for three touchdowns and passed for three more as the Skyridge football team erupted for a lopsided 71-13 victory over Westlake at home on senior recognition night.

Senior wide receiver Mitch Adamson was consistently behind the Thunder defense and was open for the two touchdowns he scored in the second quarter. Running back Jeter Fenton took a 42-yard screen pass for another touchdown late in the third quarter.

The Skyridge offense was unstoppable after the first quarter as tight ends Teagan Calton and Kegan Cook also took their turns adding points to the scoreboard. The explosive Falcon offense outclassed the Westlake defenders throughout the game.

Skyridge Head Coach Jon Lehman said, “It was a good test early. They came out hard and we were a little bit disjointed to start the game and credit to Westlake, they came out and executed well to start out the game.

“But our guys stayed with it and believed in each other. Once we got to the end of the first quarter, we really started to put things together,” he continued. “McCae really made some big plays, both throwing and running, that started to roll us forward.

“We got a couple takeaways and we were able to put the game away.”

He added, “It was really exciting to see our seniors play on senior night, who have been super dedicated to the process and committed to the program all the way through, score at the end of the game.

“Kegan Cook, I couldn’t be more proud of everything he has given to this program so I was happy that he got to score his first career touchdown at the end,” the coach said.

Wide receiver Kainoa Carvalho said, “Our team came together and we executed well. The O-line blocking and the receivers blocking and doing their job. Defense came up big too, they really stepped up tonight. It was a good game.”

The Westlake offense was unable to get untracked as Skyridge consistently stopped any effort in both phases of the game.

Linebacker Maka Fainga was relentless with five tackles and one sack. Defensive end Peli Launoa tallied four tackles and safety Jackson Lambert had three as they constantly pressured the Westlake offense. Linebacker Colby Dulle made two tackles and one interception.

“Defense started out good tonight. We were three and out for most of the drives as the first quarter went on. Even coming out during the second quarter we were still good. We had a couple of touchdowns scored on us but we still came back and got them,” said defensive end Stone Mulitalo.

Skyridge ended the regular season with a third place RPI ranking and an 8-2 record. The Falcons will have a bye this week as they prepare for the second round of the state playoffs. They will play the winner of the Herriman vs. West Jordan game at home on Oct. 30.